A combination of medications to treat high blood pressure and high cholesterol could prevent millions of premature deaths, heart attacks and strokes each year, experts have said.

They suggest global health has paid a deadly price for not using simple, low-cost blood pressure lowering drugs, statins and aspirin widely in the form of a single tablet known as the polypill.

According to two leading cardiologists, widespread availability of the drugs would substantially reduce the risk of cardiovascular disease (CVD) and be affordable for most people around the world.

Professor Fausto Pinto, president of the World Heart Federation, said: ‘Despite substantial scientific evidence of the high effectiveness, safety and affordability of the polypill, few such combined products are available, and in the few countries where they are available, use is low.’ 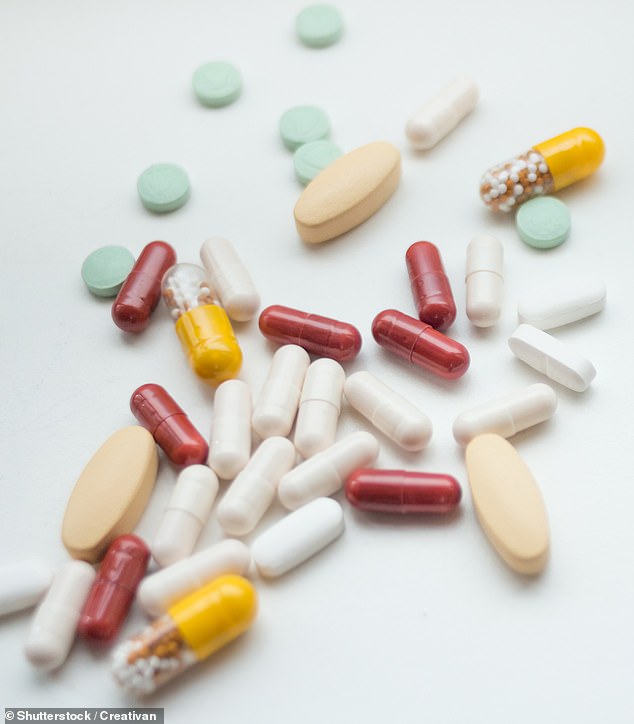 They suggest global health has paid a deadly price for not using simple, low-cost blood pressure lowering drugs, statins and aspirin widely in the form of a single tablet known as the polypill

Professor Salim Yusuf, executive director of the Population Health Research Institute and Professor Emeritus of Medicine at McMaster University, said: ‘This systemic failure is a global tragedy, as many premature deaths from CVD could be avoided.’

There is currently no polypill licensed in the UK, the UK’s Medicines and Healthcare products Regulatory Agency said.

The majority of heart attacks and strokes afflict people who have no prior CVD, meaning primary prevention of the first heart attack or stroke is essential.

While secondary prevention for people who already have CVD is also important, it does not have the same impact, the experts suggest.

Prof Yusuf said: ‘The current strategy for primary and secondary prevention of CVD has only been modestly successful in most countries, including high-income countries.

What even IS a polypill?

The polypill is also known as fixed-dose combination therapy.

It is a combination of blood pressure lowering agents, a statin for lowering low-density lipoprotein cholesterol, and low-dose aspirin.

The idea was proposed in the early 2000s as a means to reduce CVD substantially and at low cost.

‘Even in these countries, fewer than half of patients with prior CVD, and fewer than 20 per cent without prior CVD, receive effective preventive treatments.’

The polypill, also known as fixed-dose combination therapy – with the combination of blood pressure lowering agents, a statin for lowering low-density lipoprotein cholesterol, and low-dose aspirin – was proposed in the early 2000s as a means to reduce CVD substantially and at low cost.

‘The answer is now clear and resounding, with data from three independent, large, and long-term trials in primary prevention and one in secondary prevention showing its life-saving significance,’ Prof Yusuf said.

Various publications from him have shown that heart attacks and strokes were cut by 35 per cent to 50 per cent through the use of a polypill.

‘It is time to use the polypill widely to save millions of lives each year,’ Prof Pinto said.

The researchers say large pharmaceutical companies should invest in developing and testing polypills.

They also say the medication should be included on the World Health Organisation’s Essential Medicines List, and that the pill should be combined with lifestyle advice for CVD prevention delivered by experts.

Paul Leeson, professor of cardiovascular medicine at the University of Oxford, said: ‘As highlighted by the article, there is now robust trial evidence that shows a polypill approach – in which low doses of several ‘heart protective’ drugs are combined in a single tablet – can reduce the chance that someone develops heart disease.

‘However, the science, which is widely accepted, is not the real focus of the article.

‘Scientific trial results, alone, do not change the health of people or populations.

‘The real impact only comes if new treatments start to be used.

‘This requires those responsible for healthcare delivery in different countries, and the people themselves, deciding they want to use a new treatment.

‘This is a much more complex decision process that involves politics, economics, geography and commerce, as well as patient behaviours and choice.

Meals should be based on potatoes, bread, rice, pasta or other starchy carbohydrates, ideally wholegrain, according to the NHS

• Base meals on potatoes, bread, rice, pasta or other starchy carbohydrates, ideally wholegrain

• 30 grams of fibre a day: This is the same as eating all of the following: 5 portions of fruit and vegetables, 2 whole-wheat cereal biscuits, 2 thick slices of wholemeal bread and large baked potato with the skin on

• Eat some beans, pulses, fish, eggs, meat and other proteins (including 2 portions of fish every week, one of which should be oily)

• Choose unsaturated oils and spreads and consuming in small amounts