Lab tests show that porcine deltacoronavirus, first detected in China in 2012, readily jumps between the cells of different species including humans.

Professor Linda Saif, who took part in the study at Ohio State University, said the finding is cause for alarm, as we don’t know how to control it. 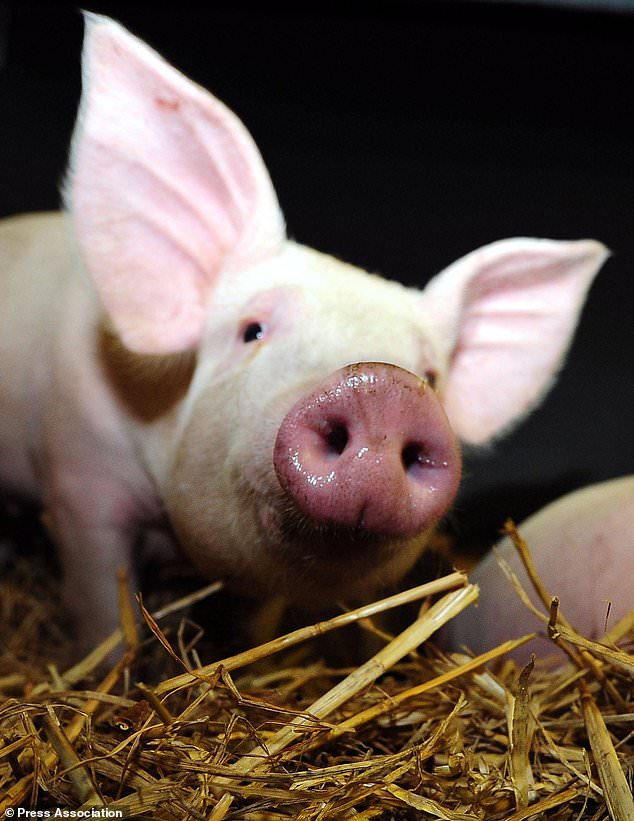 A vomiting virus in pigs has the potential to infect humans, say scientists

‘We’re very concerned about emerging coronaviruses and worry about the harm they can do to animals and their potential to jump to humans,’ Professor Saif said.

When first identified in pigs in China, porcine deltacoronavirus was not associated with disease.

Then in 2014 it was found to be the cause of a diarrhea outbreak among pigs in Ohio, US. Since then the virus has shown up in pigs in various countries.

The new research, reported in the journal Proceedings of the National Academy of Sciences, shows how the virus targets a specific receptor molecule on the surface of cells lining the airways and digestive tract.

Locking onto the receptor, a multifunctional enzyme called aminopeptidase N allows the virus to gain access to its host.

In the laboratory the virus bound to the receptor not only in pigs, as expected, but also chickens, cats and humans.

Lead researcher Dr Scott Kenney, from Ohio State University’s Food Animal Health Research Program, said: ‘A receptor is like a lock in the door. If the virus can pick the lock, it can get into the cell and potentially infect the host.

‘From that point, it’s just a matter of whether it can replicate within the cells and cause disease in those animals and humans.’

So far no human is known to have been infected by porcine deltacoronavirus.

But there are worrying similarities between the pig virus and the Sars and Mers viruses, said the researchers.

Scientists later learned that the Sars virus originated in bats before spreading to people.

The Mers virus is believed to have passed to humans from camels. An on-going Mers outbreak in Saudi Arabia has so far led to more than 1,800 cases of infection and 708 associated deaths.