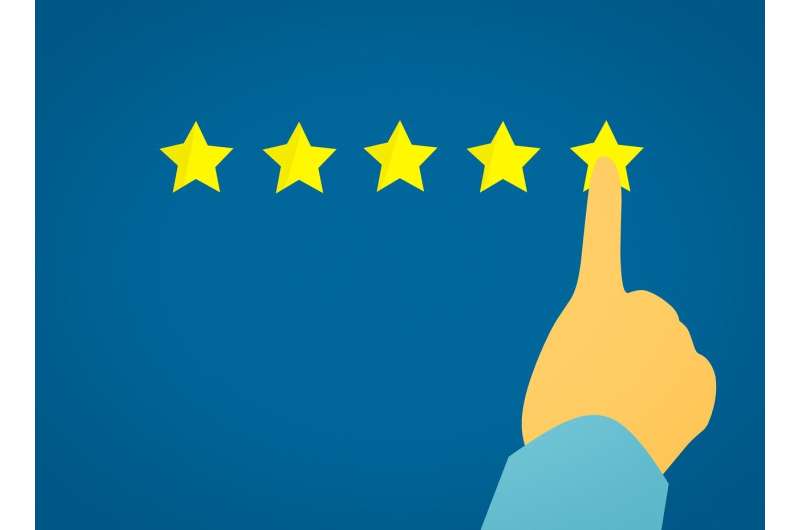 A new set of meta-analyses clarifies the often complex and contradictory health guidance linking certain diets, behaviors, and conditions to illness. The analyses, conducted by researchers from the Institute for Health Metrics and Evaluation (IHME) at the University of Washington’s School of Medicine, were published today in Nature Medicine.

IHME analyzed the strength of the evidence for 180 pairs of risk factors and health outcomes—such as smoking and lung cancer, diet low in vegetables and type 2 diabetes, and high systolic blood pressure and ischemic heart disease. The findings are presented in an easy-to-understand star rating system showing the strength of evidence for each link. The new star rating system aims to help people make personal health decisions, inform health policy, and guide future research.

“There has been extensive research on the links between various risks and health outcomes, but findings are often very different across studies,” explained Dr. Christopher Murray, Director of the Institute for Health Metrics and Evaluation and a lead author of the study.

“One of the goals of this new star rating system is to clear up confusion and help consumers make informed decisions about diet, exercise, and other activities that can affect their long-term health.”

In many areas, IHME found that the link between a risk factor and a health outcome was weaker than some might believe. Nearly two-thirds of the risk-outcome pairs investigated—112 out of 180—received only a one- or two-star rating. These include widely publicized pairings such as diet high in unprocessed red meat and ischemic stroke (one star).

In other cases, IHME’s analysis confirmed widely held consensus. Eight risk-outcome pairs received a five-star rating, including smoking and lung cancer and high systolic blood pressure and ischemic heart disease. A list of the star ratings, including a data visualization tool, can be found on IHME’s website. Additional star ratings will be added in the near future.

The analysis takes into account both the magnitude of risk shown by studies to date, as well as the consistency of findings between those studies. The star ratings are based on the most conservative interpretation of the available evidence, to limit the impact of error or bias in the underlying data.

For example, the five-star rating for smoking and lung cancer means that smoking increases the likelihood of developing or dying of lung cancer by more than 85%. At the other end of the scale, the one-star rating for red meat and ischemic stroke means that there may not be an association—in this case, because studies of this link have produced inconsistent results.

Notable ratings from the study include: 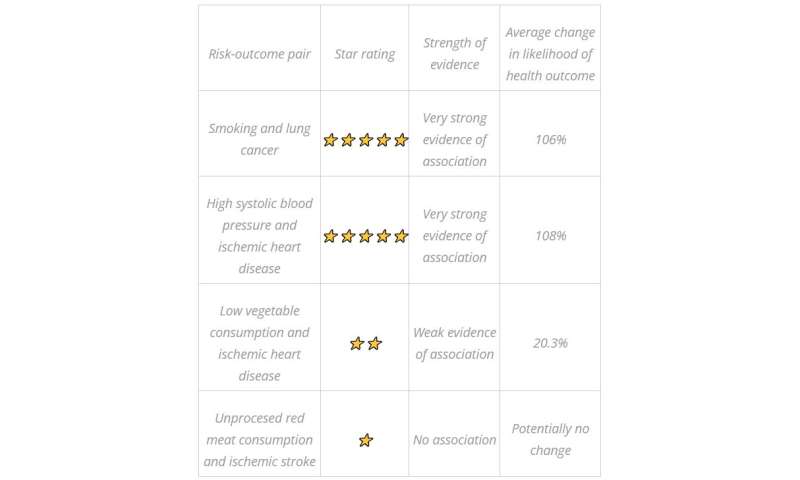 “In addition to helping consumers, our analysis can guide policymakers in developing health and wellness education programs, so that they focus on the risk factors with the greatest impact on health,” said Dr. Emmanuela Gakidou, Professor of Health Metrics Sciences at the Institute for Health Metrics and Evaluation and a lead author of the study.

“Health researchers can also use this analysis to identify areas where current evidence is weak and more definitive studies are needed.” The IHME researchers also note that while the meta-analytical approach employed by this study should not replace expert deliberation, it can provide useful input for expert committees and advisory groups making formal health policy recommendations.