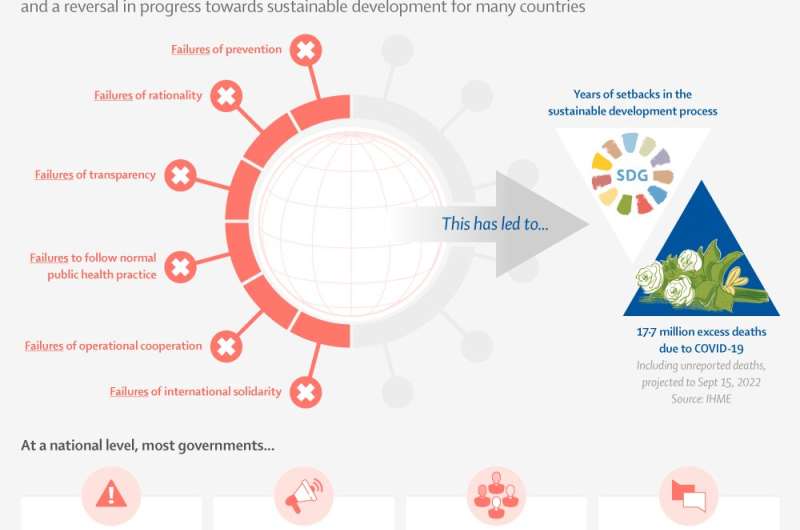 Widespread, global failures at multiple levels in the COVID-19 response led to millions of preventable deaths and reversed progress made towards the UN Sustainable Development Goals (SDGs) in many countries, according to a new report from The Lancet Commission.

The Lancet Commission on lessons for the future from the COVID-19 pandemic synthesizes evidence from the first two years of the pandemic with new epidemiological and financial analyses to outline recommendations that will help hasten the end of the ongoing COVID-19 pandemic emergency, lessen the impact of future health threats, and achieve long-term sustainable development.

The report warns that achieving these goals hinges upon a strengthened multilateralism that must center around a reformed and bolstered World Health Organization (WHO), as well as investments and refined planning for national pandemic preparedness and health system strengthening, with special attention to populations experiencing vulnerability. Crucial investments also include improved technology and knowledge transfers for health commodities and improved international health financing for resource limited countries and regions.

The Commission is the result of two years of work from 28 of the world’s leading experts in public policy, international governance, epidemiology, vaccinology, economics, international finance, sustainability, and mental health, and consultations with over 100 other contributors to 11 global task forces.

“The staggering human toll of the first two years of the COVID-19 pandemic is a profound tragedy and a massive societal failure at multiple levels,” says Professor Jeffrey Sachs, Chair of the Commission, University Professor at Columbia University (U.S.), and President of the Sustainable Development Solutions Network. “We must face hard truths—too many governments have failed to adhere to basic norms of institutional rationality and transparency; too many people have protested basic public health precautions, often influenced by misinformation; and too many nations have failed to promote global collaboration to control the pandemic.”

He continues, “Now is the time to take collective action that promotes public health and sustainable development to bring an end to the pandemic, addresses global health inequities, protects the world against future pandemics, identifies the origins of this pandemic, and builds resilience for communities around the world. We have the scientific capabilities and economic resources to do this, but a resilient and sustainable recovery depends on strengthened multilateral cooperation, financing, biosafety, and international solidarity with the most vulnerable countries and people.”

Failures of global cooperation and inequality between countries

The COVID-19 response has shown several aspects of international cooperation at its best: public-private partnerships to develop multiple vaccines in record time; actions of high-income countries to financially support households and businesses; and emergency financing from the International Monetary Fund (IMF) and World Bank.

But the events of the past two years have also exposed multiple failures of global cooperation. Costly delays by WHO to declare a “public health emergency of international concern” and to recognize the airborne transmission of SARS-CoV-2 coincided with national governments’ failure to cooperate and coordinate on travel protocols, testing strategies, commodity supply chains, data reporting systems, and other vital international policies to suppress the pandemic. The lack of cooperation among governments for the financing and distribution of key health commodities—including vaccines, personal protective equipment, and resources for vaccine development and production in low-income countries—has come at dire costs.

Pre-COVID-19 rankings of country preparedness for pandemics, such as the 2019 Global Health Security Index, ranking the U.S. and many European countries among the strongest for their epidemic response capabilities, turned out to be poor predictors of the actual outcomes of the pandemic. The Commission found that the Western Pacific region, including East Asia and Oceania, primed by previous experience with the SARS epidemic of 2002, adopted relatively successful suppression strategies resulting in cumulative deaths per million around 300, much lower than in other parts of the world. Disjointed public health systems and poor-quality public policy response to COVID-19 in Europe and the Americas resulted in cumulative deaths around 4,000 deaths per million, the highest of all WHO regions.

“Over a year and a half since the first COVID-19 vaccine was administered, global vaccine equity has not been achieved. In high-income countries, three in four people have been fully vaccinated, but in low-income countries, only one in seven,” says Commission co-author, Maria Fernanda Espinosa, former President of the UN General Assembly and former Minister of Foreign Affairs and Defense, Ecuador. “All countries remain increasingly vulnerable to new COVID-19 outbreaks and future pandemics if we do not share vaccine patents and technology with vaccine manufacturers in less wealthy countries and strengthen multilateral initiatives that aim to boost global vaccine equity.”

The report is also critical of national responses to COVID-19, which often featured inconsistent public health advice and poor implementation of public health and social measures, such as wearing face masks and vaccination. Many public policies did not properly address the profoundly inequitable impacts of the pandemic on vulnerable communities, including women, children, and workers in low- and middle-income countries. These inequities were exacerbated by extensive misinformation campaigns on social media, low social trust, and a failure to draw on the behavioral and social sciences to encourage behavior change and counter the significant public opposition to routine public health measures seen in many countries.

“National pandemic preparedness plans must include the protection of vulnerable groups, including women, older people, children, disadvantaged communities, refugees, Indigenous peoples, people with disabilities, and people with comorbid medical conditions. Loss of employment and school closures due to the pandemic have devastated progress made on gender equality, education and nutrition and it is critical to prevent this from happening again. We ask governments, private sector, civil society, and international organizations to build social protection systems and guarantee universal health coverage,” says Commissioner Gabriela Cuevas Barron, Co-Chair of UHC2030 (Geneva, Switzerland), Honorary President of the Inter-Parliamentary Union and former senator in the Mexican Congress, Mexico.

The deepening of socioeconomic inequities, coupled with economic and public health setbacks and growing social and political tensions, has jeopardized the 2030 SDG agenda. Two clear timelines have been set for pandemic response and preparedness: immediate actions in the short-term to end the COVID-19 emergency, and longer-term policy recommendations for a new era of multilateral cooperation to achieve long-term sustainable development.

To finally control the pandemic, the Commission proposes that all countries adopt a vaccination-plus strategy, combining widespread vaccination with appropriate public health precautions and financial measures.

“A global vaccine-plus strategy of high vaccine coverage plus a combination of effective public health measures will slow the emergence of new variants and reduce the risk of new waves of infection while allowing everyone (including those clinically vulnerable) to go about their lives more freely. The faster the world can act to vaccinate everybody, and provide social and economic support, the better the prospects for exiting the pandemic emergency and achieving long-lasting economic recovery,” says Commission co-author Prof. Salim S. Abdool Karim of the Mailman School of Public Health, Columbia University, U.S.

To prepare for future pandemic health threats, the Commission recommends strengthening national health systems and the adoption of national pandemic preparedness plans, with actions to improve coordinated surveillance and monitoring for new variants, protect groups experiencing vulnerability, and create safer school and workplace environments by investing in ventilation and filtration.

To improve the world’s ability to respond to pandemics, the Commission calls for WHO to be transformed and bolstered by a substantial increase in funding and greater involvement from heads of state representing each region to better support decision-making and actions, especially on urgent and controversial matters. The Commission supports calls from other panels for a new global pandemic agreement and an update of the International Health Regulations.

With the support of WHO, the G20, and major financial institutions such as the World Bank, the Commission recommends increased and more effective investment for both pandemic preparedness and health systems in developing countries, with a focus on primary care, achieving universal health coverage, and disease control more generally.

To achieve this goal, the Commission estimates that around $60 billion US would be required yearly, equivalent to 0.1% of the gross domestic product of high-income countries. Consolidation and expansion of several existing health funds should be closely aligned with the work of WHO, and the Commission emphasizes that health system strengthening must be implemented at the local level, reflecting regional needs and priorities, rather than from the top down by a few donor countries.

Alongside this long-term funding commitment, the Commission recommends a 10-year effort by G20 countries to bolster research and development and investments in infrastructure and manufacturing capacity for all critical pandemic control tools including testing, diagnostics, vaccines, treatments, and PPE, alongside support and training for health workers in low- and middle-income countries.

These investments and the restructuring of multilateral global health efforts are essential to achieve the 2030 SDG Agenda. In 2019, the IMF estimated that LMICs face a financing gap of $300-500 billion a year to achieve SDGs, and this gap has increased as a result of the pandemic. Global recovery plans from the pandemic are not aligned with the SDGs and do not do enough to counter climate change.

Further recommendations are made, such as the call for an expansion of the WHO Science Council to apply urgent scientific evidence for global health priorities, including future emerging infectious diseases; strengthening of WHO through the establishment of a WHO Global Health Board with representation of all six WHO regions; and strengthening of national health systems on the foundations of public health and universal health coverage, grounded in human rights and gender equality. The Commission also recognizes the need for an independent, transparent investigation into the origins of SARS-CoV-2, alongside robust regulations, to help prevent future pandemics that may result from both natural and research-related activities, and to strengthen public trust in science and public authorities.