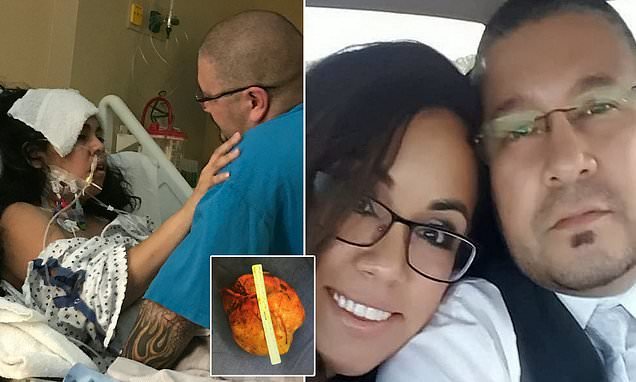 ‘My husband thought I was possessed by an evil spirit and doused me in holy water’: Mother, 39, discovers her delusional symptoms were caused by her body attacking her BRAIN

A mother-of-three had to be taken to a psychiatric hospital when a tumour on her ovary triggered a brain condition which made her hallucinate and turn violent.

Lorina Gutierrez, 39, suffered from fits, her heart stopped and she lost the ability to walk, talk and eat by herself because of the rare illness.

But the real culprit was a rare swelling of the brain called autoimmune encephalitis, triggered by a huge growth on one of her her ovaries. 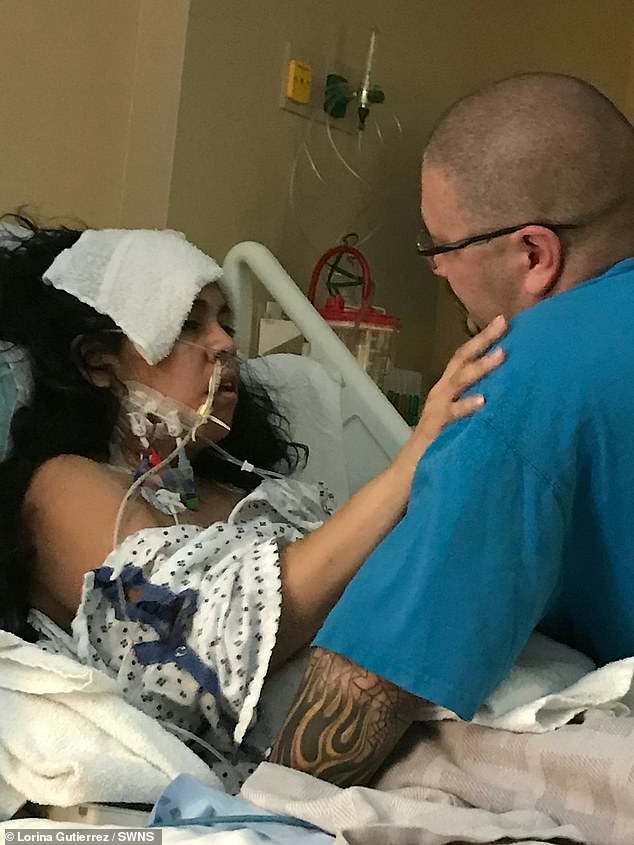 Lorina Gutierrez, 39, suffered from hallucinations, seizures and violent behaviour as a result of her own immune system attacking her brain, a condition triggered by an ovary tumour 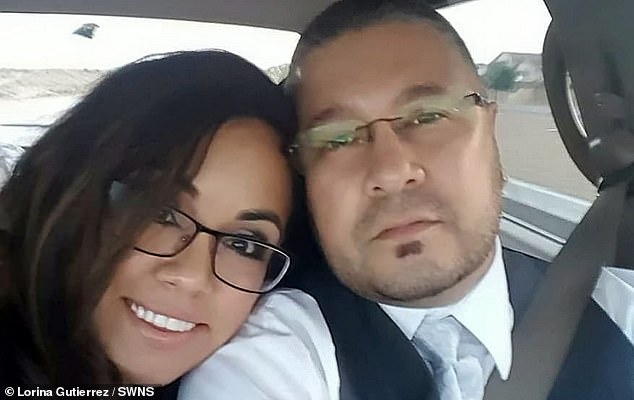 Mrs Gutierrez’s husband, Stephen, 42, said his wife acted like she was possessed by an evil spirit, becoming paranoid there were cameras in the couple’s home and even trying to punch Mr Gutierrez during her psychiatric assessment

Mr Gutierrez, a truck driver, said: ‘I was so scared, it was like she was possessed. The night after she came home from the ER we were up the whole night.

‘She couldn’t sleep and she was just talking gibberish. She kept saying “We need to get out of here, we need to leave.”

‘She kept getting up and trying to leave the house.

‘The next morning I brought her to her doctor, who asked me had she been drinking or using drugs.’

The couple, from Albuquerque, New Mexico, are parents to Jonathan, 25, Matthew, 19 and Alyssa, 16, and are now determined to raise awareness about the condition.

Autoimmune encephalitis is a serious illness in which the body’s immune system overreacts – in this case to Mrs Gutierrez’s tumour – and attacks someone’s brain.

It can cause seizures, difficulty moving or communicating, psychosis, aggression and panic attacks.

According to the International Autoimmune Encephalitis Society, the condition affects around 90,000 people worldwide each year.

Mr and Mrs Gutierrez, and their doctors, were baffled by her sudden change in character, which made her paranoid there were cameras in her home.

She said: ‘They believed I was having a nervous breakdown even though I didn’t have a history of mental health issues.

‘Over the course of a few days, my husband said my attitude completely changed.

‘I can’t remember this but he said I was getting scared and I was worried there were cameras in the house.

‘I told him we had to unplug them. I kept trying to escape and get out of the house.’ 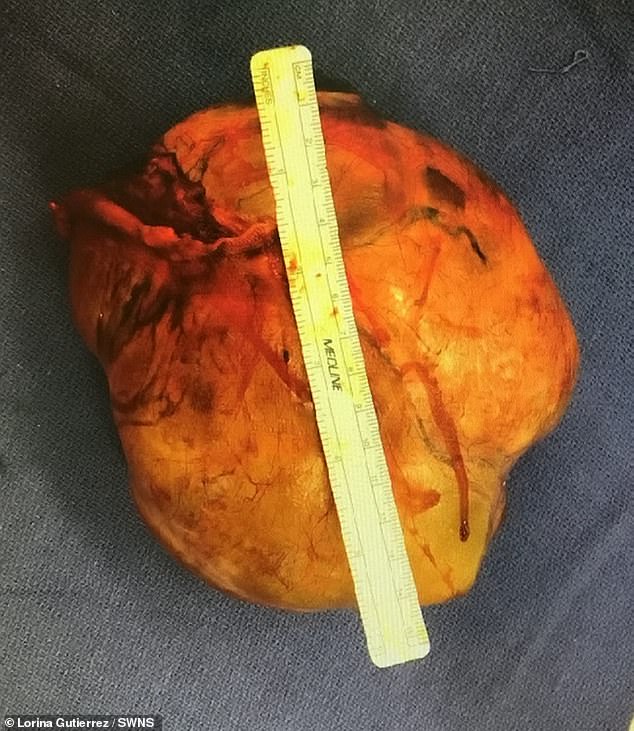 Mrs Gutierrez’s condition was triggered by a huge six-by-six inch (15cm) tumour which had grown on one of her ovaries. After the tumour was removed doctors flushed the damaging immune cells out of her body using blood filtering and steroids 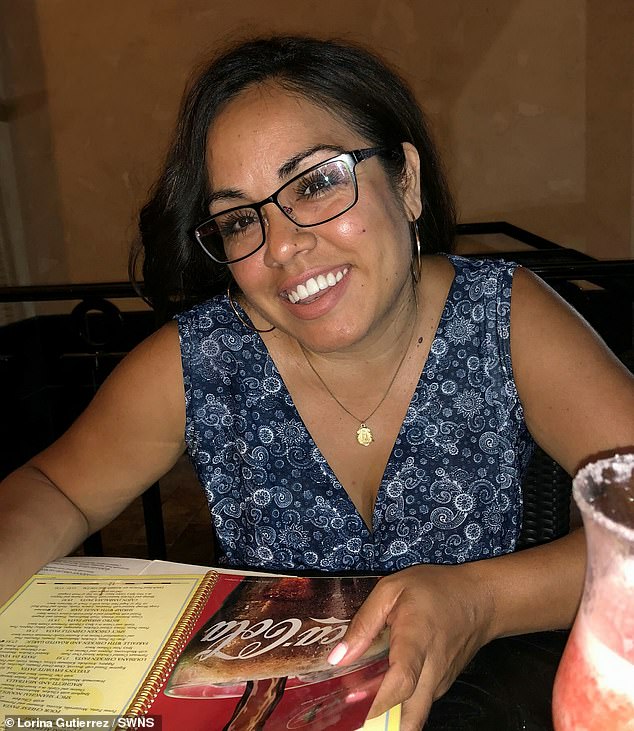 WHAT IS AUTOIMMUNE ENCEPHALITIS?

Autoimmune encephalitis is a serious medical condition in which the immune system attacks the brain, impairing function.

It caused by a problem with the immune system (the body’s natural defence against infection).

The immune system mistakes healthy tissue in the brain as a threat and attacks it, causing the brain to become inflamed and swell.

The body produces antibodies which attack the NMDA receptors in the brain, which are proteins that cause electrical impulses.

Their functioning is necessary for judgement, perception of reality, human interaction, memory, and the control of unconscious activities such as breathing and swallowing.

It’s not always clear why the immune system malfunctions in this way.

Some cases of autoimmune encephalitis are caused by the immune system reacting to the presence of a tumour (an abnormal growth) inside the body.

The main symptoms are flu like, but people also develop memory loss, difficulty sleeping, and may become unable to communicate or speak coherently.

They might become confused, have hallucinations or exhibit strange behaviour.

Other symptoms include seizures, loss of consciousness and movement disorders.

The situation reached crisis point when she tried to punch her husband during a doctor’s appointment, and medics decided to send her to a psychiatric unit.

‘The doctors thought it might be depression or a nervous breakdown and I trusted that,’ Mr Gutierrez said.

‘During her psychiatric consultation she took a swing at me and we had to hold her down, it was so out of character.

‘It was then she was admitted to the psychiatric hospital. At one point I threw a little bit of holy water on her.’

Comparing his wife’s terrifying behaviour to 1973 horror film, The Exorcist, he joked: ‘Afterwards, my family told me they wouldn’t have been surprised if her head started spinning after I did that.’

While in the psychiatric hospital doctors realised Mrs Gutierrez’s symptoms were being caused by her immune system attacking her brain.

And it was then they found a six-by-six inch (15cm) tumour on one of her ovaries.

Autoimmune encephalitis can occur as a result of growths because the body produces antibodies to tackle the tumour but they overreact and affect the brain.

By this point Mrs Gutierrez was experiencing six seizures a day as doctors removed the tumour and tried to clear her body of the dangerous antibodies using a process called plasmapheresis – filtering of the blood – and heavy steroids.

Mrs Gutierrez said: ‘During my time in hospital I coded blue and they had to resuscitate me.

‘I lost all function, the ability to walk, talk, eat or even go to the restroom by myself. I was a 39-year-old woman wearing adult diapers.

‘Over the course of three months I underwent speech, physical, and occupational therapy but I don’t remember much of it. It’s a blur.

‘Right now I’m in remission but I could relapse at any time. It’s not curable, it’s only treatable. It has impacted my whole life. It’s been a hugely traumatic experience.’ 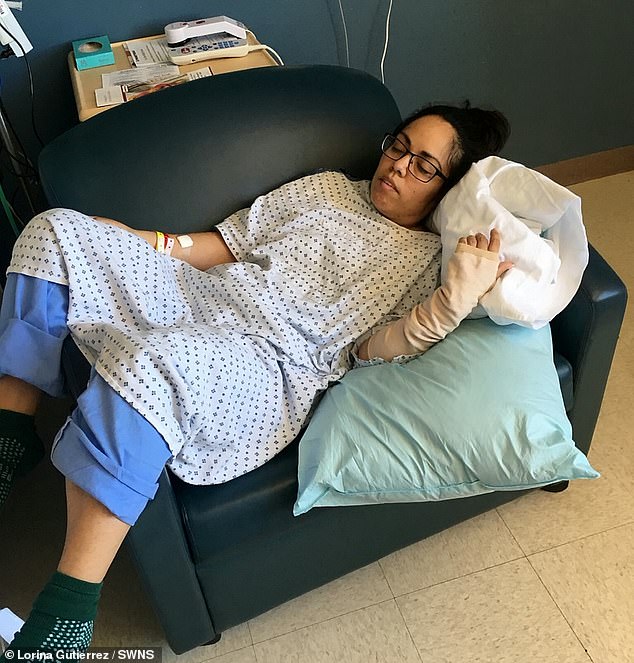 Mrs Gutierrez, who needed speech, physical, and occupational therapy, said she cannot be cured of the condition, which causes brain swelling, and fears it could return at any time

Despite the trauma of her illness, Mrs Gutierrez believes her faith has helped her stay positive.

And she and her husband are now dedicated to raising awareness about autoimmune encephalitis.

Despite the trauma of her illness, Lorina believes her faith has helped her stay positive.

She said: ‘I’m a survivor and I really feel like I can help others with experience and information. I know now that that is my purpose.’

For more information about the condition visit the International Autoimmune Encephalitis Society website.