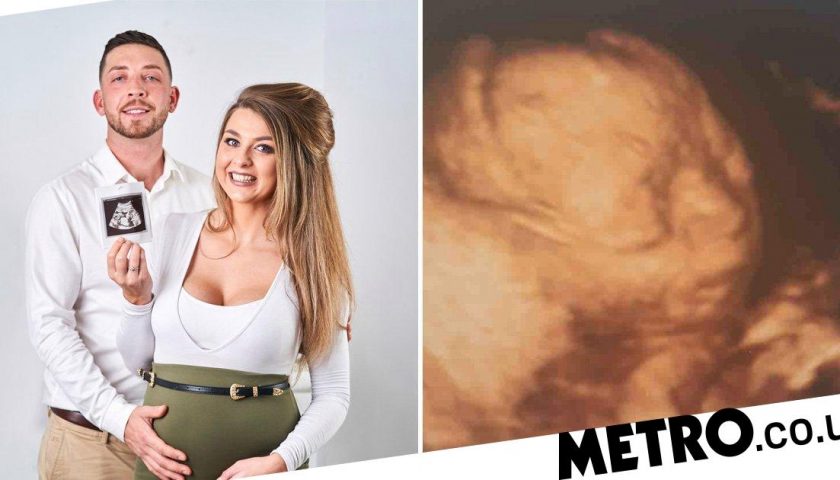 Nicola Guinness was born with a wall of skin in her womb, cervix and vagina.

Diagnosed with uterus septum at 24, she thought it meant her dreams of having a baby would never come true.

At age 15, she had been misdiagnosed with a condition called uterus didelphys (UD), where there are two wombs, vaginas and cervixes, meaning it was more difficult to conceive but not impossible.

For this reason, she started trying for a baby at 18 but every time she fell pregnant, she would miscarry and evenutally doctors discovered that she didn’t have UD – she actually had a wall in her womb (uterus septum), which was cutting it in half and starving it of oxygen.

But after almost a decade of trying to conceive and six miscarriages, she is now 26 weeks pregnant with her miracle baby, who she and her partner Anthony Latta, 30, have named Reggie.

Nicola was able to cut her risk of miscarriage this time thanks to rare surgery to have the wall in her womb removed.

The wall remains in her cervix and vagina, meaning Reggie will have to be born by c-section but the couple are excited at the prospect of finally becoming parents.

Nicola, from Brentwood, Essex, said: ‘I was 15 when doctors told me I had uterus didelphys, which meant that I might have trouble conceiving but that I would be able to carry a baby once I got pregnant.

‘They advised me to start trying early, so I started trying to get pregnant as soon as I was 18.

‘I’d always dreamed of becoming a mum so I just wanted to give myself the best chance and start as soon as I could.

‘But every time I got pregnant I would only reach four weeks and then I’d miscarry every time.

‘I was heartbroken and so depressed, I remember I would just sit and cry for hours wondering why this was happening to me.

‘I was having test after test, but it wasn’t until two years ago that I got a letter from my doctors saying I actually had complete uterus septum – which is a thick wall of skin dividing my reproductive system into two – and that I would never be able to carry a baby.

‘Now, it means everything to me to be so close to becoming a mother.

‘Most mums only have to wait nine months to meet their baby but I’ve been waiting eight years to meet mine.’

From her first period, Nicola realised she was different, noticing that she would still bleed despite using tampons and could even feel the bottom of her septum which separates her vagina into two sides.

The 26-year-old claims she was initially misdiagnosed with uterus didelphys after she was referred to a specialist in Addenbrooke’s Hospital Cambridge at 15.

However, in 2017 doctors discovered she actually had the similar condition uterus septum – a wall of skin which divides a single womb, cervix and vagina into two parts.

Due to a lack of oxygen supply to the septum, a fertilised egg which attaches itself to the wall skin in the womb can never survive.

Nicola began searching for new answers over what could be done to remove the wall of skin from her womb and give her a chance at becoming a mum.

After discovering that a simple two-hour keyhole surgery could remove that part of the septum, the beautician asked doctors at Addenbrooke’s Hospital if they would operate.

She claims they refused as there was a risk the op could make her infertile but her cousin, Jade, a midwife from Ipswich, found a doctor at her NHS trust who specialised in Nicola’s condition and agreed to perform the surgery in October 2018.

After undergoing the op at Ipswich Hospital, Nicola now has one womb.

Only eight months after the operation, she fell pregnant naturally and for the first time ever, Nicola’s miracle baby has now reached 26 weeks gestation.

She said: ‘Fighting for the operation was the worst time of my life because I knew that something could be done but doctors weren’t prepared to help me.

‘They just sent me a letter telling me that I wouldn’t be able to have kids – we were devastated.

‘But I still hadn’t given up, my sister agreed to be my surrogate and I would have gone through with it if my cousin hadn’t managed to find a surgeon to help me.

‘Even when I fell pregnant after the operation I was really negative.

‘I would go to appointments and ask ‘is ‘it’ ok’ and would talk about the future with ‘ifs’ and ‘buts’.

‘I started spotting at around four weeks and I was having all the pains that I usually do when I miscarry so I thought I knew what was happening.

‘But when we went to the hospital they did my bloods and told me the baby was still fine and it was just blood from the other half of my cervix and vagina.’

At 20 weeks, the excited couple discovered that they were having a baby boy and they have already splashed out £1,000 on a ‘miracle baby’ bib, a cot, pram and baby clothes for Reggie’s arrival.

‘When they told us we were having a little boy two weeks later, we decided we would call him Reggie and since then we’ve been getting everything ready to prepare for his arrival.

‘I never gave up on it and I’m so glad I kept fighting to get the surgery because if I hadn’t I might never have got this far.

A Cambridge University Hospitals spokesperson said: ‘We strive to give the very best treatment and guidance to patients, but if someone has a complaint it is important that they contact our Patient Advice and Liaison Service (PALS) as soon as possible, which will investigate it thoroughly and in accordance with our protocols.’