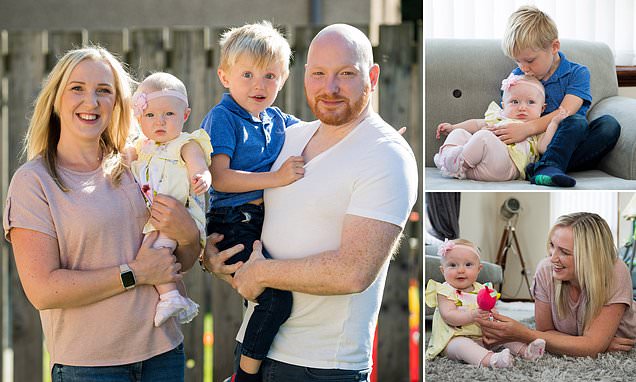 Mother desperate to give her son a sibling finally has a second baby after selling her home and business to raise £25,000 for IVF

A mother who was desperate to give her son a sibling sold her home and business to pay for £25,000 IVF.

Gemma Chalmers, 36, spent a decade trying for her dream family before she finally got pregnant with her son, Kayle, now four.

She and partner John Jones, 37, had both grown up alongside siblings and were desperate for their son to have the same experience.

Last year, after more difficulties getting pregnant naturally, the couple decided it was time to try IVF.

But the partners, from Aberdeen, had to make sacrifices to pay for the procedure, which normally costs £2,000 to £3,000 per cycle. 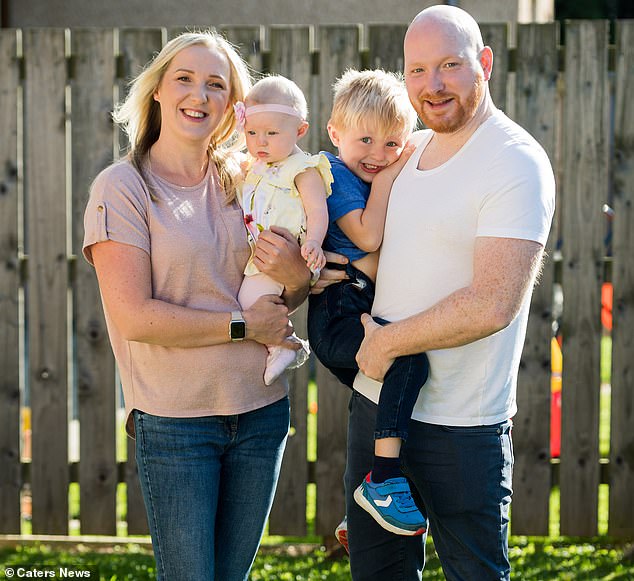 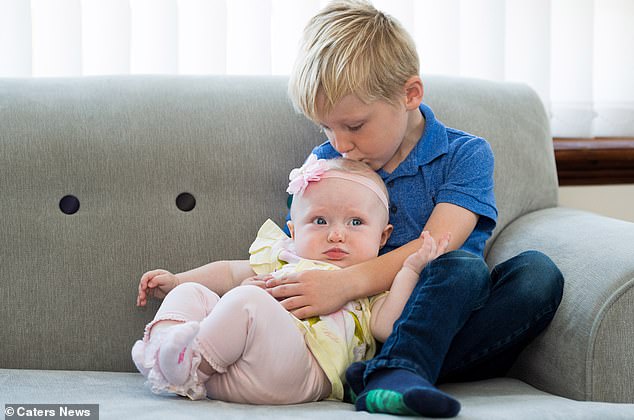 Ms Chalmers and partner John, both from Aberdeen, had both grown up alongside siblings and were desperate to give Kayle one too 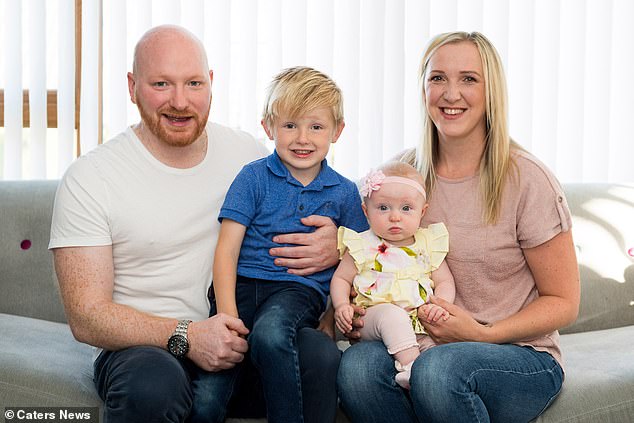 The couple had to sell their flat and Ms Chalmer’s mobile beauty business to raise the £25,000 needed for the procedure

The couple decided to go through with IVF last year when Ms Chalmers suffered her second ectopic pregnancy – when the embryo attaches outside the uterus and cannot grow.

But the couple had to sell their flat and mobile beauty business to raise the £25,000 needed for the procedure.

It all paid off when they welcomed daughter Lilly into the world earlier this year. Ms Chalmers, now a full-time mother, said: ‘We desperately wanted a sibling for Kayle.

‘He got on so well with his cousins who were a similar age, so we knew he would be great with a little brother or sister too.

‘I have two brothers and my partner has a brother as well so we both know how good it is to have siblings.

‘John and I wanted Kayle to have someone to play with and fight with – like kids do – as it’s a great part of childhood.

‘Kayle loves having a little sister and has been protective of her from day one. He was that excited about her arrival, he used to lift my top up in the street to kiss my belly.

WHAT IS AN ECTOPIC PREGNANCY?

An ectopic pregnancy is when a fertilised egg implants itself outside of the womb, usually in one of the fallopian tubes.

The fallopian tubes are the tubes connecting the ovaries to the womb.

If an egg gets stuck in them, it won’t develop into a baby and your health may be at risk if the pregnancy continues.

Unfortunately, it’s not possible to save the pregnancy.

It usually has to be removed using medicine or an operation.

An ectopic pregnancy doesn’t always cause symptoms and may only be detected during a routine pregnancy scan.

If you do have symptoms, they tend to develop between the 4 and 12 week of pregnancy.

– a missed period and other signs of pregnancy

– tummy pain low down on 1 side

– pain in the tip of your shoulder

– discomfort when peeing or pooing

‘The moment he came to see her in hospital for the first time, he immediately went over to her and asked to hold her. Seeing that moment made all the injections and heartache worthwhile.

‘It’s amazing to be a full time mummy to two beautiful children – I wouldn’t change it for the world.’

The couple had been trying for a baby for five years when they successfully got pregnant with Kayle.

Although they had been on an NHS waiting list to start fertility treatment, they no longer qualified for treatment once they had one child.

Knowing they always wanted more than one, they set about trying to conceive straight away.

This crushed any chance the couple had of falling pregnant naturally. But after deciding to sell the flat they leased out, the pair booked in for their first round of IVF.

Ms Chalmers added: ‘I never really knew how big of a family I wanted, but I definitely knew I wanted more than one baby.

‘I’ve always been quite open about my fertility battle meaning people have often commented and told me to stop trying and just enjoy the one child I had – but I was too determined to give Kayle a sibling to give up.

‘John and I said during the second round of IVF that we’d only have one more if that failed but luckily we went on to have four which gave us Lilly.

‘The first time the IVF failed, I felt like I’d lost a child and it hit me really hard – but eventually I became numb to the feeling of failing to fall pregnant.

‘I was elated when it was finally a success but I was still nervous throughout the whole pregnancy; it wasn’t until Lilly was physically in my arms I was able to relax a bit.’

As well as selling their flat for a £20,000 profit, the mother went on to sell her mobile salon for £8,000 to pay off additional fees. 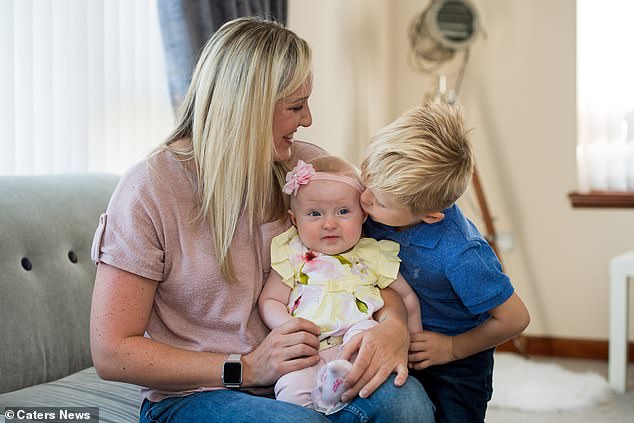 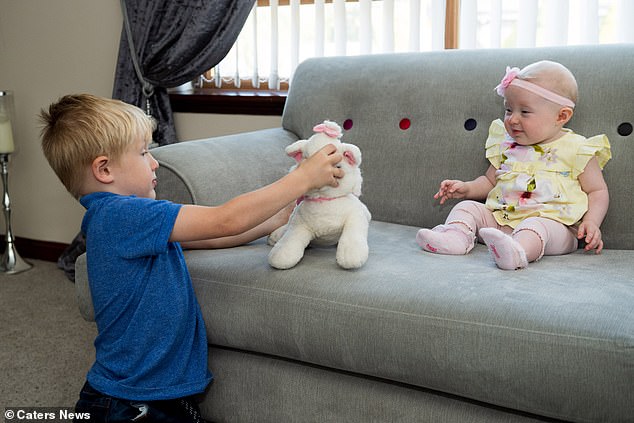 Although they had been on an NHS waiting list to start fertility treatment, once they had one child, they no longer qualified for any NHS-funded treatment

Ms Chalmers added: ‘Whilst it was a big financial strain, I wouldn’t have stopped until I had a second child.

‘At one point, I even said to John I’d do it without him if he didn’t want to keep trying!

‘Having my dream family is worth all the money in the world – I’d have spent my last penny for it all if I’d have needed to.

‘I don’t mind the fact I had to sell my business and give up my job because I love being a full time mummy.

‘We still have two embryos frozen, so there’s still a chance for us to try again, but for now, I couldn’t be happier to have my two, amazing children.’

HOW DOES IVF WORK?

In-vitro fertilisation, known as IVF, is a medical procedure in which a woman has an already-fertilised egg inserted into her womb to become pregnant.

It is used when couples are unable to conceive naturally, and a sperm and egg are removed from their bodies and combined in a laboratory before the embryo is inserted into the woman.

Once the embryo is in the womb, the pregnancy should continue as normal.

The procedure can be done using eggs and sperm from a couple or those from donors.

Guidelines from the National Institute for Health and Care Excellence (NICE) recommends that IVF should be offered on the NHS to women under 43 who have been trying to conceive through regular unprotected sex for two years.

People can also pay for IVF privately, which costs an average of £3,348 for a single cycle, according to figures published in January 2018, and there is no guarantee of success.

The NHS says success rates for women under 35 are about 29 per cent, with the chance of a successful cycle reducing as they age.

Around eight million babies are thought to have been born due to IVF since the first ever case, British woman Louise Brown, was born in 1978.

The success rate of IVF depends on the age of the woman undergoing treatment, as well as the cause of the infertility (if it’s known).

Younger women are more likely to have a successful pregnancy.

IVF isn’t usually recommended for women over the age of 42 because the chances of a successful pregnancy are thought to be too low.

Between 2014 and 2016 the percentage of IVF treatments that resulted in a live birth was: