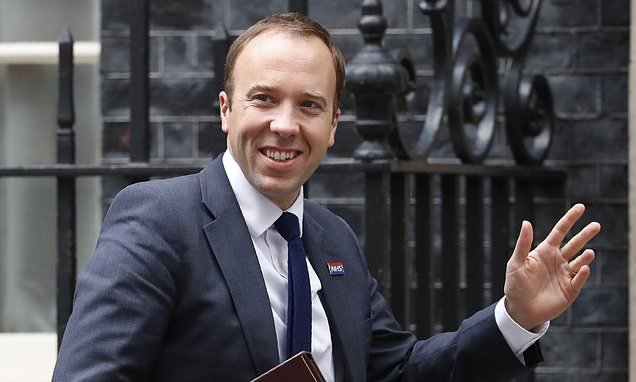 Junior doctors have been offered a guaranteed 8.2 per cent pay rise and higher weekend and night pay in a new £90million deal with the Government.

The British Medical Association (BMA) will hold a vote on changes to the junior doctor contract later this month.

Newly-qualified medics have been locking horns with the Government for years in a dispute over their salaries and out-of-hours pay.

This deal contains ‘significant enhancements’, the BMA said, and would see junior doctors’ pay – which starts at almost £28,000 – rise by two per cent per year until  2023. 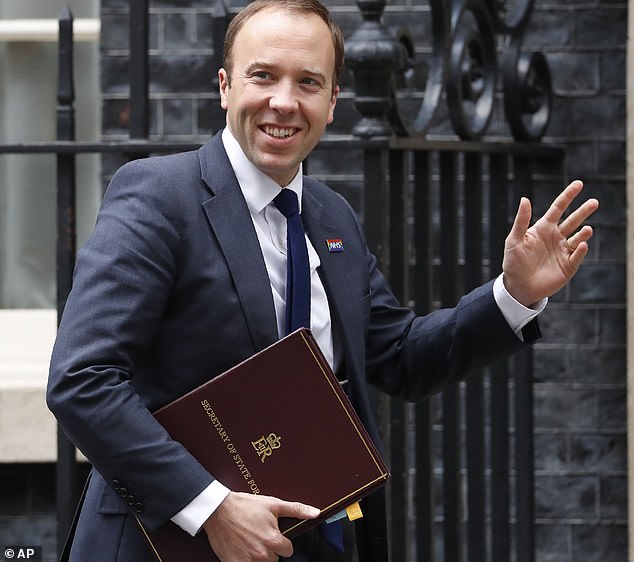 Matt Hancock, the Health and Social Care Secretary, said he was delighted to have come to a potential agreement with the British Medical Association over junior doctors’ pay

‘The BMA has scored major victories for junior doctors,’ said the chairman of the Junior Doctors Committee, Dr Jeeves Wijesuriya.

‘By securing enhanced shared parental leave for trainees and extra funding for rest and fatigue facilities around the country, following worrying complaints about overworked doctors sleeping on floors or being unable to recuperate during night shifts.

‘The proposed deal contains other significant enhancements to further improve the pay, conditions and training opportunities for junior doctors across the NHS and are a result of a new collaborative, constructive negotiation process that has learned from the mistakes of the past.

The NHS has had to pay £250,000 in fines for making junior doctors work overtime between 2015 and 2019, an investigation revealed in January.

Junior doctors worked beyond their contracted terms more than 63,000 times – an average of 2.1 times per doctor, the Health Service Journal found.

The figures, obtained through Freedom of Information, date back to the introduction of the controversial junior doctor contract in 2016.

The true figure is likely to be higher, as some junior doctors revealed they were discouraged from reporting by senior staff over fears they would look inefficient.

Doctors who work overtime should be given time in lieu, more pay or have their hours reviewed.

Experts said at the time they were more worried about NHS trusts where fewer fines had been given because a high number of reports showed a desire to change.

‘There is of course a great deal more that needs to be done and junior doctors will remain at the forefront of campaigns for a better-funded, well-staffed and publicly-run health service.

‘We believe these proposals are a major step in the right direction for our workforce and our NHS, and we have endorsed these improvements to our members in the upcoming referendum.’

The BMA said if members vote in favour of the new contract the changes would come into effect as soon as possible.

Its ongoing referendum will last from June 14 to June 25 in which members will vote on whether to accept the new terms.

All junior doctors and medical students in the final or second-to-last years at university will be eligible to vote as long as they are members of the BMA.

Trainee doctors started going on strike in 2016 in anger about their pay.

According to the BMA, junior NHS doctors currently earn £27,146 in their first foundation year after graduating.

Health and Social Care Secretary, Matt Hancock, said: ‘I am delighted that we have today successfully concluded our negotiations with the BMA leadership on an improved offer for our junior doctors that provides an 8.2 per cent pay rise over the next four years and improved working conditions for junior doctors.

‘Our junior doctors work incredibly hard caring for patients around the clock and I want each and every one of them to know that they will be valued, supported and fairly rewarded throughout their careers.’