Time-restricted eating (TRE) is all the rage among those wanting to hack their health. It involves eating within a window of time each day, typically around eight hours and then fasting for a longer period overnight.

But is when we eat as important as what we eat or even how much we eat? 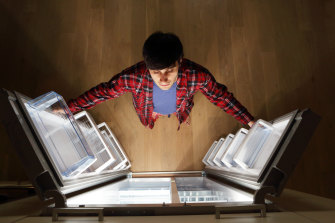 When we eat matters, possibly as much as what we eat and how much.Credit:Getty

It’s a question that has captivated scientists in recent years and new research helps to explain why timing matters as well as the challenges in trying to answer that question with any certainty.

Researchers know that limiting the amount we eat promotes healthy ageing. But during animal trials exploring caloric restriction they also discovered that the mice were so hungry by the time they were given their daily rations that they ate it all in one go. This, inadvertently, meant that the mice were fasting for much of the day. So, was it the fasting or the calorie restriction or the timing of the meal that was leading to the positive results?

A new study published in Nature Metabolism attempted to unpack some of these questions. The researchers from the University of Wisconsin–Madison put three groups of mice on different eating plans for four months, with all the diets restricted in calorie intake by 30 per cent.

The first group had three meals a day over the course of 12 hours; the second group had it all in one go, fasting for the remainder of the day; and the third had their food bulked out with cellulose fibre, so it took them all day to finish eating, but they consumed the same number of calories as the other two groups. A fourth group of mice acted as the control group and ate their normal diet without restrictions.

The authors found that fasting provided benefits regardless of whether you ate less and, if you did eat less, it enhanced the effects. Specifically, they found that fasting, without reducing calorie intake, led to many of the same metabolic changes and effects on gene expression as eating less does.

They also found fasting was necessary to activate changes in insulin sensitivity and nutrient metabolism among calorie restricted mice. Their findings suggested, they concluded, that the regulation of metabolic health and longevity might not just be about how much is eaten but also when.

A separate paper, published in September in Cell Metabolism, highlighted the challenge of extrapolating from mice studies by pointing out that high blood sugar is associated with higher mortality in humans but lower mortality in mice. In short, we are very different creatures.

Luigi Fontana, a professor of medicine and nutrition at the University of Sydney’s Charles Perkins Centre, adds that a mouse dies from starvation after about 48 hours while a human can last a month or more. This means that the length of time a mouse fasts is not the equivalent time in humans.

But in mice, the data are clear: when they eat is as important as what they eat and how much. The research in humans is still developing, however a new review, published in Endocrine Reviews, found that preliminary human studies “have reported promising results” in reducing the risk for obesity, diabetes, and cardiovascular diseases. Fontana and others are also exploring the impact of fasting and TRE on cancer prevention and treatment.

Why does it have such a big effect?

They believe, and this is what the mouse studies have demonstrated, that it’s to do with our circadian rhythm.

Our circadian rhythm – the 24-hour body clock that regulates our hormones, our sleep and wake cycles, hunger and metabolism – is influenced primarily by light but also by eating.

When people regularly eat in the middle of the night, when they are meant to be sleeping – like shift workers for instance – it disrupts their circadian rhythm, messing with their metabolism and hormones and therefore increasing their risk of metabolic disorders.

On the flipside, when we synchronise eating with the metabolic processes of our circadian rhythm, we are riding the wave of our metabolism and hormones. This, according to the review, can “sustain robust circadian rhythm” which has positive knock-on effects to our health.

Interestingly, although a fast can last hours or days, we don’t have to do it for days to get the results, which is the appeal of TRE.

When we wake up in the morning, we can simply wait half an hour or an hour to eat (or to have our first coffee of the day) and eat an earlier dinner, with nothing but water or tea for at least two-to-three hours before bed. This aligns our energy intake with our circadian rhythm and creates a longer overnight fast.

Cortisol, a stress hormone that kicks us into gear for the day, is at its highest first thing in the morning and starts to drop off after 30-to-60 minutes.

“It’s also about feasibility. People can probably eat between 10 and 7 every day, whereas if you ask them to eat between 9 and 5 every day it might be harder.”

If we wait till it drops off we may be “a bit better off” in terms of our glucose response to food, explains Heilbronn, who is also the Obesity and Metabolism laboratory lead at South Australian Health and Medical Research Institute.

Melatonin starts coming up at 8 or 9 o’clock in the evening which makes us sleepy and interferes with our body’s ability to use insulin properly, she adds. This is why it’s better to eat earlier rather than later, where possible:

“It’s also about feasibility. People can probably eat between 10 and 7 every day, whereas if you ask them to eat between 9 and 5 every day it might be harder.”

The impact, though, can be great. A 2013 Israeli study divided women with polycystic ovary syndrome into two groups. The first ate a large breakfast, medium lunch and small (190 calorie) dinner. The second group did the opposite.

It suggests the changes were the result of supporting the circadian rhythm, says Fontana.

By extending the fasting window before bed and when we wake in the morning, we also go for a longer period without activating insulin and the “other pro-ageing factors”, he explains. But what we eat still matters.

“If you think you can eat whatever you want during the day and the 5:2 or TRE is magically going to solve your problems, I’m sorry it doesn’t work,” says Fontana, who believes TRE is more promising and easier to maintain than fasting regimes, like 5:2, but any approach still needs exercise and good nutrition too. “If I had to say what is healthier, I think TRE with exercise and a healthy diet is better than the 5:2.”

And regardless of whether we eat less or not, any form of TRE seems to benefit our health.

Heilbronn is currently recruiting overweight people in Adelaide and Melbourne for a 12-month TRE study. If you are interested in participating, email: [email protected]