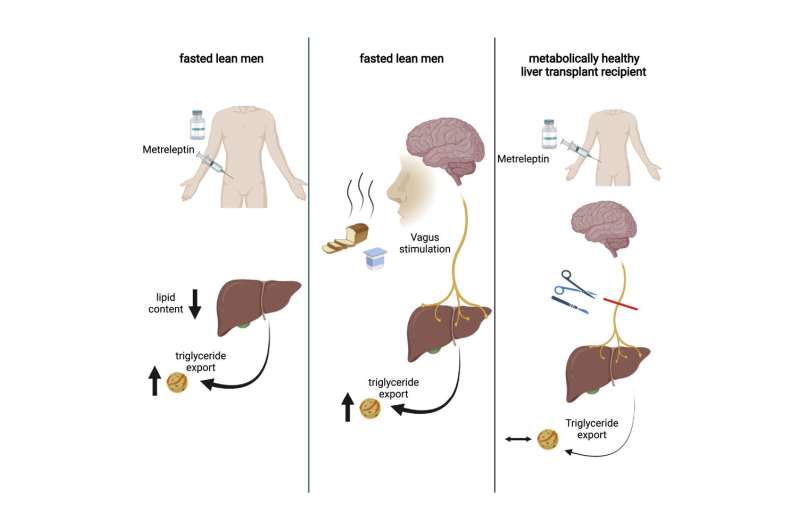 A group at MedUni Vienna has identified a regulatory loop controlled by leptin, by which this adipocyte-derived hormone regulates hepatic lipid metabolism via the autonomic nervous system. The study, published in Cell Metabolism, provides evidence that this adipose tissue-brain-liver axis, previously identified in animal models, also exists in humans and is opening up new approaches for treating metabolic diseases such as fatty liver disease.

The aim of the study conducted by Thomas Scherer and Matthäus Metz from the Division of Endocrinology and Metabolism (Department of Medicine III at MedUni Vienna and Vienna General Hospital) was to identify the effects of leptin on liver fat metabolism in humans, which are independent of its anorexic actions. The adipose tissue hormone leptin circulates in the blood in relation to fat mass and acts primarily as a satiety signal in the brain. In addition to controlling appetite, it is also involved in the regulation of glucose and lipid metabolism.

These effects are mediated through the autonomic nervous system, which links the brain to peripheral organs, such as the liver and the adipose tissue. Human recombinant leptin (metreleptin) is approved for the treatment of lipodystrophy. In these leptin-deficient patients, metreleptin lowers hepatic lipid content independent of food intake. However, the underlying mechanism has been unclear.

In previous animal experiments, the study group demonstrated that leptin stimulates the release of lipids from the liver and at the same time suppresses the formation of new lipids, thereby reducing liver fat content. This effect was dependent on an intact autonomic innervation of the liver and was abolished after severing the vagus nerve.

In the present study, the authors tested whether a comparable mechanism regulates hepatic lipid metabolism in humans. They show that a single injection of metreleptin stimulated the hepatic lipid export of healthy, normal-weight men and lowered liver fat content. A similar effect occurred after modified sham feeding, a procedure that induces cephalic phase reflexes and thereby physiologically stimulates the vagus nerve. In contrast, metreleptin failed to promote hepatic lipid secretion in liver transplant recipients whose livers are not innervated by the autonomic nervous system as a result of transplantation.

The study therefore suggests that leptin also regulates liver fat content in humans via the brain and the autonomic nervous system, explained study leader Thomas Scherer: “Our results suggest that leptin, similar to previous observations in animal models, also stimulates the release of lipids from the liver in humans and thus lowers liver fat via the central nervous system and the vagus nerve.”