Going on a crash diet? It could leave you with agonising gallstones

Jo Lisgo was pregnant with her first child when what began as heartburn escalated into something that now, as a mother of two, she says felt even more painful than childbirth.

‘The pain in my abdomen was so bad I was vomiting,’ Jo recalls. ‘I felt a need to push something out of my stomach. The pain came in waves — it was the worst thing I’ve experienced.’

Jo, who was 25 at the time and 12 weeks pregnant, went to A&E, where doctors quickly pinpointed the cause of her agony: gallstones. She needed immediate surgery to save her life and that of her unborn son.

‘My gallbladder was so inflamed it could have burst,’ says the now 31-year-old teacher, who lives with her stonemason husband Darren, also 31, and their sons Jack, five, and Harry, two, in Gateshead, Tyne and Wear. 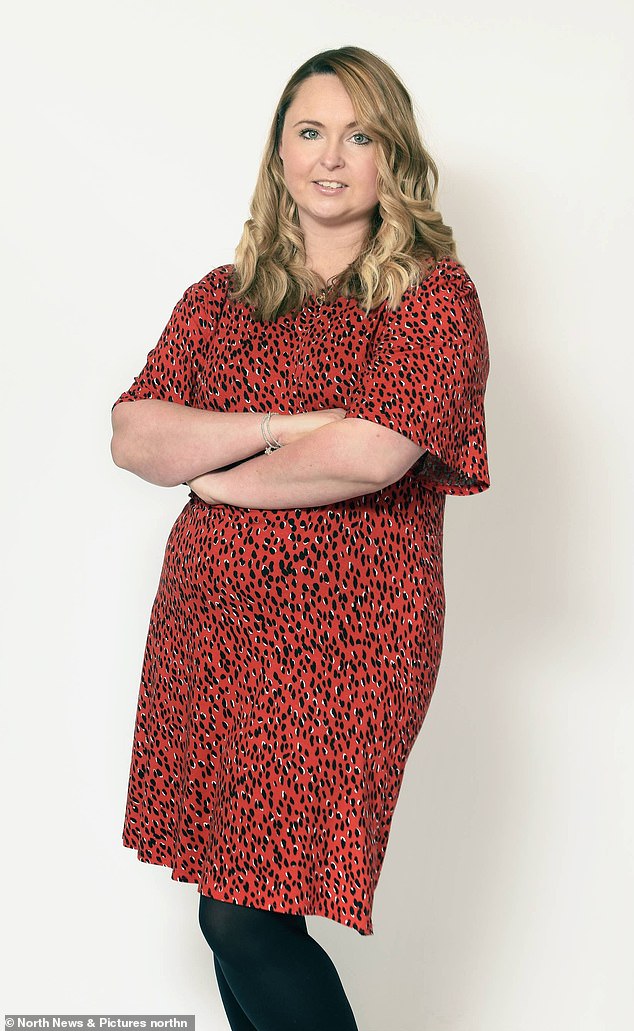 Jo Lisgo from Gateshead, who despite her young age has had her gall bladder removed after suffering with gall stones. Tragically, her father also suffered from gall stones and died this year as a result of them

‘I was told my baby and I were both at risk.’

Gallstones are balls consisting mainly of cholesterol or bilirubin — the by-product formed when red blood cells are broken down — and salts. They grow in the gallbladder, a lightbulb-shaped organ that sits under the liver and stores bile, a green liquid that is discharged into the small intestine to help the body absorb nutrients from food.

The stones can vary in size from a grain of sand up to a golf ball. They begin as crystals of salts such as calcium carbonate, which then mix with cholesterol.

Aged just 25, slim and fit, Jo seemed an unlikely candidate for gallstones, which are traditionally associated with a high-fat, high-calorie diet and found mostly in people over 40.

But the problem is on the rise. While gallstones are common — affecting one man in six and one woman in three in the UK — the number of people needing their gallbladder removed due to troublesome gallstones rose by nearly 34 per cent between 2004 and 2011. And the charity Guts UK is increasingly hearing of young women in their 20s and even teenagers being affected.

Experts think this may be linked to the trend for fasting and crash diets, which can encourage gallstones to form faster than normal.

‘Stones usually form over two years or more, but rapid weight loss or fasting causes them to form far quicker — potentially within months — because the reduced food intake delays emptying of the gallbladder, giving the bile longer to become concentrated and form crystals,’ says Alastair Hayes, a gastrointestinal surgical registrar at the Royal Infirmary of Edinburgh.

A recent study published in the American Journal of Gastroenterology found that rapid weight loss after bariatric surgery was linked to a tenfold increase in hospital admissions for gallstones.

Before Jo’s ‘attack’ she had spent years ‘dieting and then bingeing on pasta and noodles’, and her weight would fluctuate between 10st (she is 5ft 3in tall) and 9st.

After university she spent a while in Thailand, where she and her friends ‘would eat out loads because it was so cheap’. To compensate for overeating, Jo would take herbal diet pills.

In fact, anything that slows the release of bile — such as physical inactivity and type 2 diabetes — increases the risk of gallstones.

Being pregnant, taking the Pill and oral HRT also raise the risk, as they all alter hormone levels, which is thought to lead to a chemical imbalance in the bile, encouraging stones to develop. 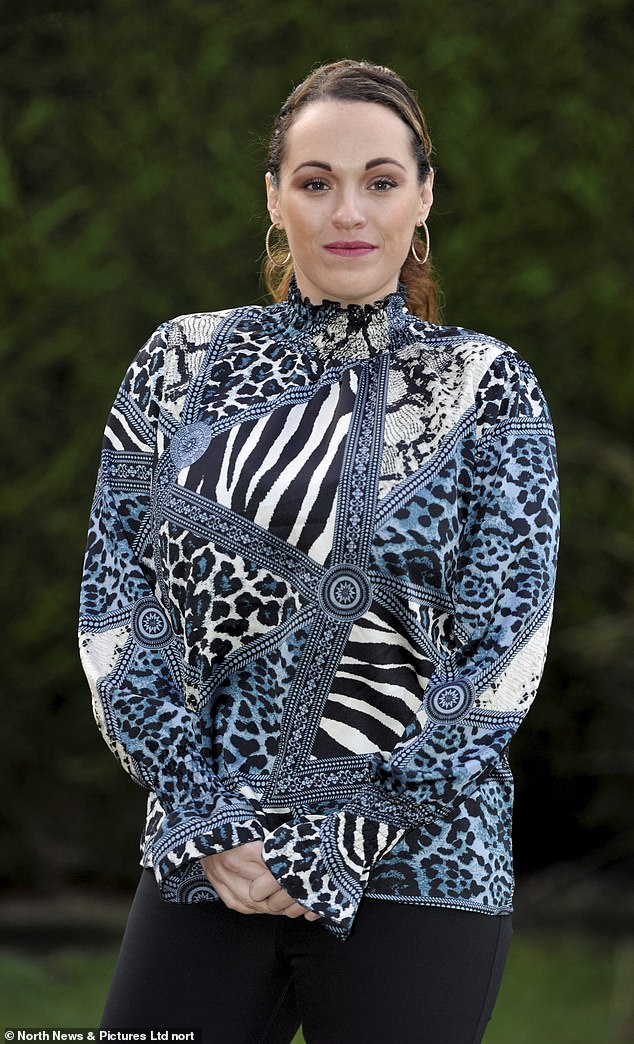 Claire Codling from Gateshead, Tyne & Wear who is suffering with gall bladder disease and is hoping to have her gall bladder removed before she suffers another episode of pain. She has been suffering since she was in her 20s and has been warned there may have been a connection to drinks like prosecco

Medical conditions that affect the flow of bile out of the gallbladder, making stones more likely, include digestive disorders such as Crohn’s disease and irritable bowel syndrome (IBS).

One stone or many may form. According to reports, one patient in India needed 12,000 stones removing in 2015.

About 80 per cent of those with gallstones have no symptoms, as small stones can pass through the digestive system unnoticed.

Problems arise when bigger stones get stuck, typically in the neck of the gallbladder, causing it to become inflamed (cholecystitis). This triggers bouts of pain that can last for up to eight hours and typically occur after a meal, because eating triggers the gall bladder to try to release bile.

Alternatively, stones may pass into the bile duct, blocking the flow of bile, which can lead to jaundice or an inflamed pancreas (pancreatitis). In rare cases this can even prove fatal.

Jo’s father Gordon died in June this year, at 60, when he developed a gallstone that became stuck in his bile duct — five years after Jo’s life-threatening attack.

‘Dad had been having episodes of sickness since the previous February,’ says Jo. ‘Once, the pain was so bad he collapsed.’

Doctors didn’t know what was wrong. But Gordon had pancreatitis, which led to a life-threatening infection. He died three days after being admitted to hospital. ‘I didn’t know this could happen,’ says Jo. ‘It was a huge shock.’ 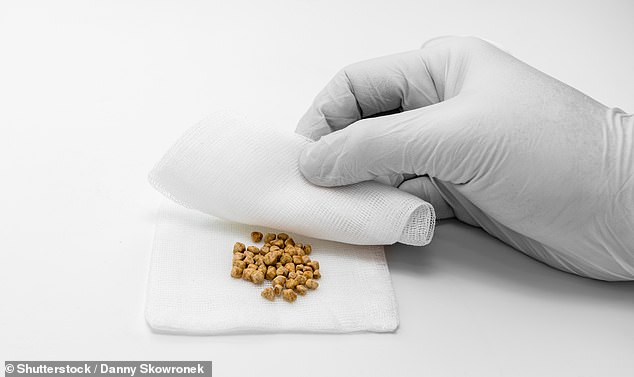 Man reviling removed gallstones laying on an compress. Once gallstones are diagnosed, patients may be encouraged to switch to a low-fat diet (stock)

Gallstones can be diagnosed in various ways, including an MRI or ultrasound scan, or blood tests to check for raised levels of certain liver enzymes which may indicate bile duct damage. Even so, gallstones can be hard to pinpoint, according to Mr Hayes. ‘Some people have no inflammation but severe pain,’ he explains. ‘Pain may even arise from the sphincter that connects the bile duct to the duodenum [small intestine] going into spasm. But equally that can be caused by irritable bowel syndrome.’

Once gallstones are diagnosed, patients may be encouraged to switch to a low-fat diet and exercise regularly to prevent existing stones ‘growing’.

But if they cause recurrent pain, surgery may be recommended. According to NHS figures, 70,000 Britons need this every year.

‘Patients may have had many attacks,’ says Mr Hayes. ‘But most hospitals try to remove the gallbladder the first or second time a patient is admitted to hospital with cholecystitis.’

The body can manage well without a gallbladder. Bile flows directly from the liver into the small intestine but is less thick and concentrated.

Yet there can be delays in accessing this surgery.

Jo’s friend Claire Codling, 31, developed gallstones in 2011 when she was 23. But despite crippling bouts of pain lasting for several hours about three times a year, she is yet to be offered surgery to treat them.

‘While some painkillers give a little relief, others make it worse,’ says Claire, a communications guide for the deaf, who lives with partner Andrew Wilson, 35, an insurance broker, and their son Harvey, 15 months, in Tyne and Wear.

Claire has kept food diaries to watch for triggers but nothing stood out. ‘I work out, I watch what I eat and I try to avoid stress,’ she says. ‘What more can I do?’

She is waiting for an endoscopy — an investigation by camera via a tube in the throat — to confirm her symptoms are due to gallstones, after which she hopes to be recommended for surgery.

But if she doesn’t get it on the NHS, she and Andrew are saving up the £6,000 needed to have her gallbladder removed privately.

Alternatively, patients like Claire may be eligible to join a new trial at NHS Forth Valley, in Scotland, which is looking into the value of testing or removing stones in the bile duct (which are sometimes removed before the gallbladder itself) in patients considered low to medium risk.

Ideally, this would prevent the need to remove the gall bladder, especially in an emergency.

Jo hopes the diagnosis and treatment of gallstones can be improved nationwide.

‘Mine were fixed so easily,’ she says. ‘I want others to be aware of what can go wrong without the right help. My dad went through unbearable pain. I don’t want anyone else to suffer as he did.’

Furniture company Fellowes recently commissioned an image —named Emma — of how the average office worker might look in 20 years if they didn’t stop putting in long hours at poorly set up workstatons.

Here, we explore how your office habits harm your health.

This week: The back 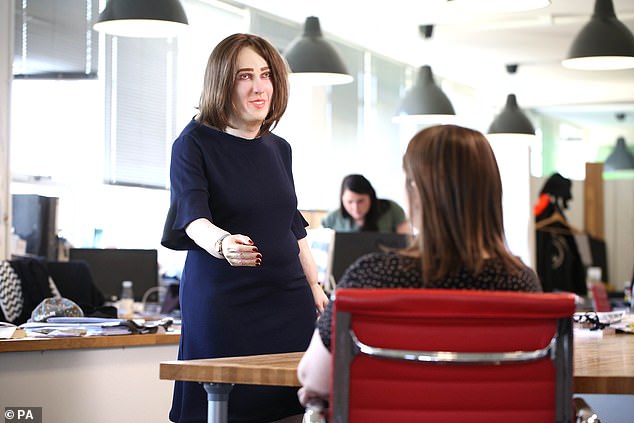 Emma, pictured, has got a hunched back, swollen limbs and bloodshot eyes — and in twenty years, you’ll be just like her if you don’t improve your working conditions, experts warn

Stooping over the keyboard can lead the neck and shoulders to curve and stiffen and the spine to lose flexibility, creating Emma’s grossly hunched forward posture. ‘I have been seeing patients with work-related back pain for 17 years and while I’ve never seen anyone look that bad, I have seen some people get close,’ says Lyndsay Hirst, a physiotherapist in Leeds.

‘I often say to my patients that your best posture is your next posture, meaning you need to keep moving and vary your position.

‘Also, those who spend all day at a desk followed by all evening on the sofa will almost always have problems with weakness in the postural muscles that support the back, and will probably develop back pain — while those who exercise regularly will be more protected. So start exercising.’