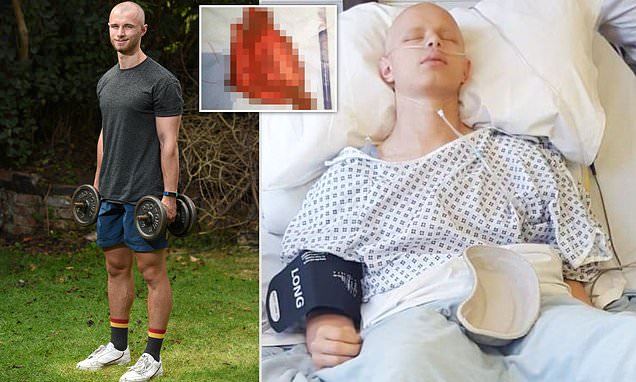 University student, 21, discovers he has 20 cancerous tumours on his right lung – despite showing no symptoms 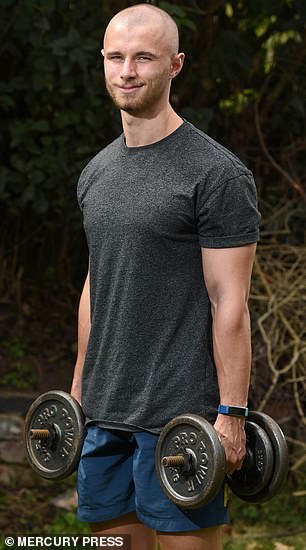 Dan McGill, 21, from Leicester, was able to perform gruelling two-hour gym sessions most days despite having 20 cancerous tumours growing on his lung

A fitness fanatic who performed gruelling two-hour gym sessions six times a week was shocked to discover he had 20 cancerous tumours growing on his lung – despite showing no symptoms.

Dan McGill, 21, from Leicester, was initially diagnosed with Ewing’s  sarcoma, a rare type of cancer that grows in or around the bones, aged 18.

He was given the all-clear in September 2016 when surgeons removed an eight centimetre mass from his ribcage.

But in July, doctors were stunned when a routine check-up revealed the cancer had returned and 20 tumours were growing across his right lung.

The graphic design student, who showed no symptoms, had been going to the gym six days a week and playing basketball for hours on end every day.

Now the workout fanatic is raising money to build a gym in his home after his chemotherapy left him susceptible to germs and unable go out in public.

Mr McGill, who is studying in London, said: ‘Last time the mass was protruding outside of my body.

‘But this time round I had absolutely no symptoms which was so bizarre to everyone – including my doctors.

‘I wasn’t short of breath, I didn’t have on-going fatigue or tiredness – normally you would see a lack of motivation and a drop in your general energy levels but I haven’t experienced any of that and I still haven’t really, even though I’m on chemo now. 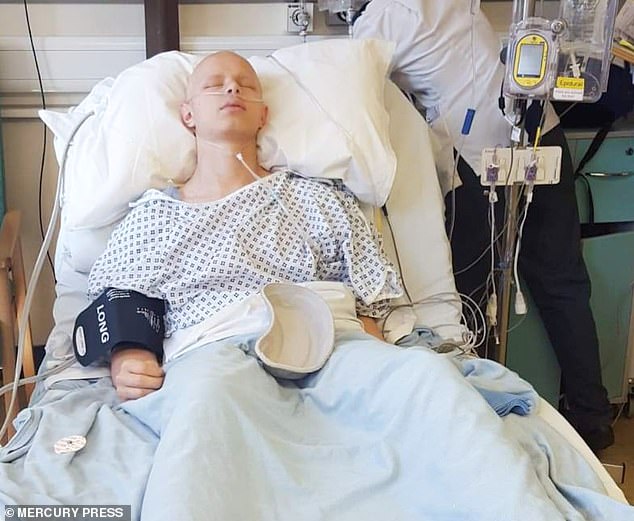 The graphic design student was initially diagnosed with Ewing’s sarcoma, a rare type of tumour that grows in or around the bones, aged 18 (in hospital after the operation to remove the mass) 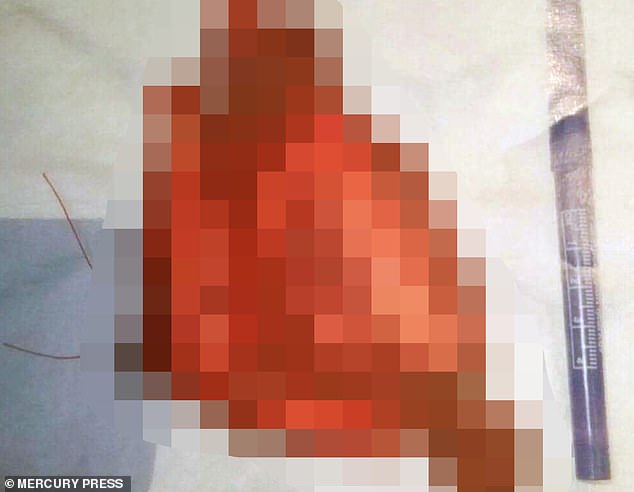 ‘I hadn’t caught any coughs or colds, I wasn’t having aches and pains in my lungs or muscle cramps.

‘It was such a shock to the system because I felt so physically fit – probably the most fit I have ever felt because I was playing basketball for hours everyday as well as doing CrossFit.’

He added: ‘I had gone for a routine check-up and the doctor said it looked like one mass had come back on my right side.

‘She sent me to have a scan and a week later they told me that there was 20 masses all on the right side of my lungs.

WHAT IS EWING’S SARCOMA?

Ewing’s sarcoma is a cancer of the bone, which usually affects the ribs, pelvis and spine. In rare cases, it also occurs in the soft tissues.

The condition affects less than 30 children a year in the UK.

Around 225 young people are diagnosed annually in the US.

The cause of Ewing’s sarcoma is unclear but may relate to the timing of rapid bone growth.

The most common symptom is pain, which is usually worse at night.

Treatment depends on the size and position of the tumor but usually involves chemotherapy, surgery and radiotherapy.

Amputation may be unavoidable if the cancer affects the surrounding blood vessels and nerves.

However, this may be avoidable by replacing the bone with a prosthesis or a bone from elsewhere in the body.

‘It was quite shocking not only to me but I could see it in my oncologist’s face when she said it.

‘My body was in a really healthy place but to be told I had these 20 masses on my lung just didn’t add up, the two didn’t make sense.’

Ewing’s sarcoma is a cancer of the bone, which usually affects the ribs, pelvis and spine. In rare cases, it also occurs in the soft tissues.

The condition affects less than 30 children a year in the UK. The cause is unclear but may relate to the timing of rapid bone growth.

Mr McGill believes his workout routines have helped his body fight the cancer.

He added: ‘I really believe that everything I have done with my fitness in the past two and a half years has enabled me to cope with the cancer physically and mentally.

‘As well as giving me a positive outlook on life it’s meant that I’m always doing something rather than sitting down – I’m not a sedentary person so I think that by being active every day my body has got used to getting up and doing a workout and even though I have cancer it has just carried on as normal.’

At 18, Mr McGill underwent 15 rounds of chemotherapy and 11 rounds of radiotherapy before having a major operation to remove a tumour from the fifth and sixth ribs on his left side.

Now he is undergoing another six cycles of chemotherapy to shrink the nodules, which will leave him ‘neutropenic’ for the next 16 weeks.

This means he will be so susceptible to germs that he’ll be largely confined to the house.

The diagnosis has put his life on hold, forcing him to postpone his plans to get a flat with his long-term girlfriend, Elsa Attwood Collier, 21.

He has moved back home to Leicester to continue his degree in Graphic and Media Design with London College of Communications from home while under-going treatment at Leicester Royal Infirmary. 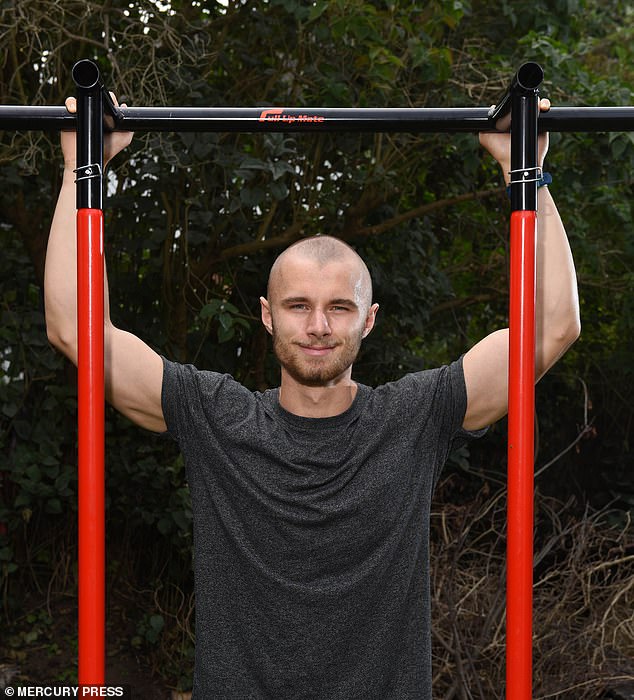 Following his second diagnosis, Mr McGill has set up a GoFundMe page to raise £3,000 to build a gym in his back garden so he can keep up his workout routine 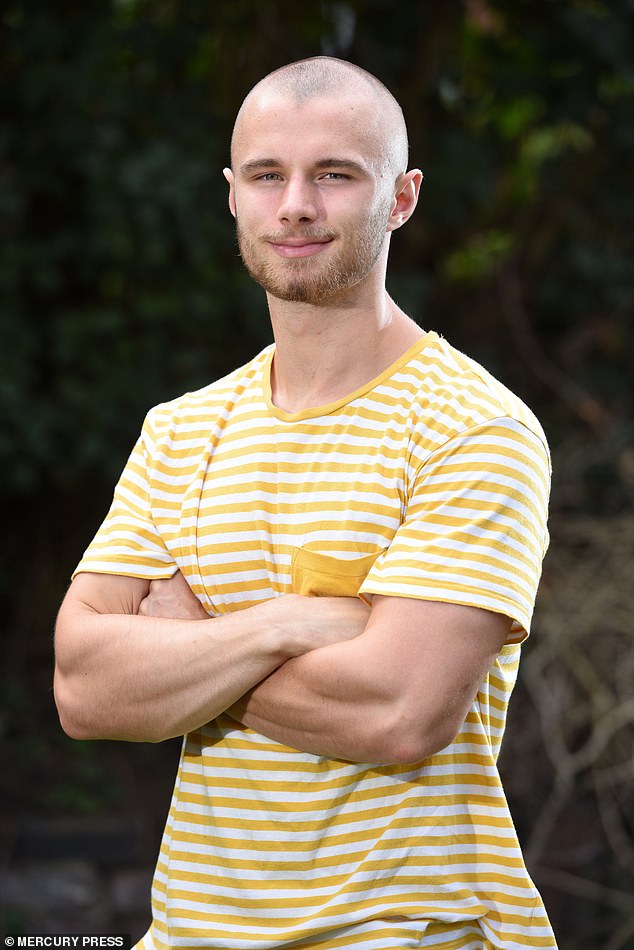 Doctors have also been stumped as to why Mr McGill’s Ewing’s sarcoma – a normally very aggressive cancer that spreads rapidly – has not made its way to his left lung. He attributes it to his fitness regime

The fitness addict is still shocking doctors with his ability to exercise nearly every day while undergoing chemo.

He has set up a GoFundMe page to raise £3,000 to build a gym in his back garden so he can keep up his workout routine.

Mr McGill said: ‘The doctors are pretty shocked that I’m still working out, they keep telling me to stop giving them heart attacks when I tell them I’m still doing it.

‘The gym was where I would go to release my anxieties, de-stress and to feel better. I could happily sit in the gym for hours absorbing the positive energy in there but now I’m too susceptible to germs to go to a public gym.

‘I want somewhere for me, a space that I can go to and know this is what I do and who I am, so I don’t lose the connection to who I was before I had cancer.’ 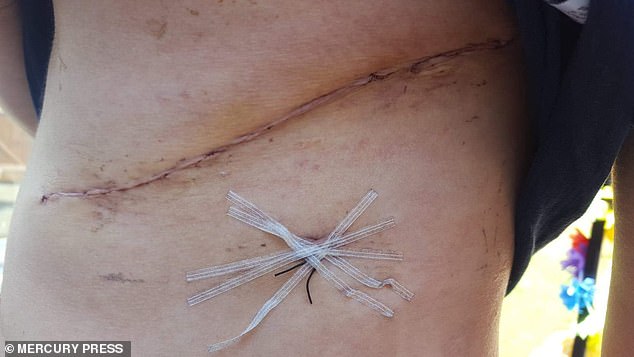 Mr McGill’s scar following the operation to remove the mass in 2016. The new diagnosis has put his life on hold, forcing him to postpone his plans to get a flat with his long-term girlfriend 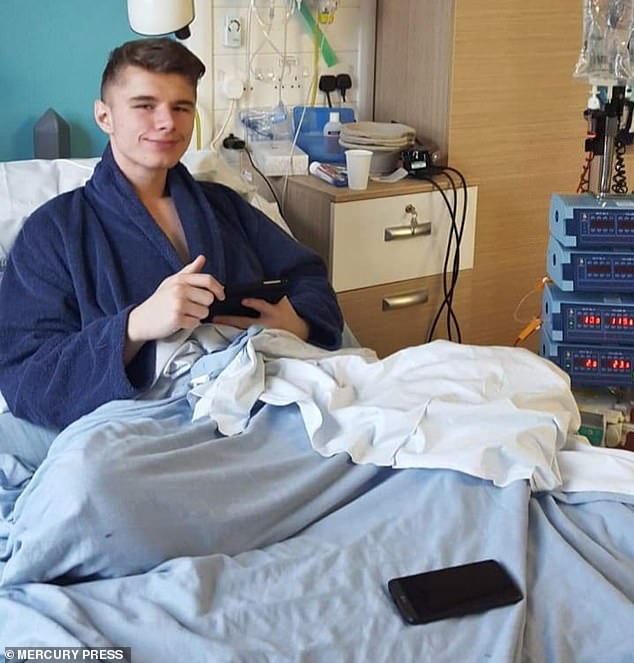 Always positive: Mr McGill in hospital in 2016 before a round of chemotherapy

Doctors have also been stumped as to why Mr McGill’s Ewing’s sarcoma – a normally very aggressive cancer that spreads rapidly – has not made its way to his left lung.

Mr McGill added: ‘The fact that it’s not spread to my left lung is also very strange – we don’t know why there’s so many tumours on my right side and why they haven’t spread over to the left side again.

‘The worst thing about cancer is that it’s deemed so negatively that people just think because you have cancer you’re on death row.

‘The amount of cancers that are caught and resolved now is amazing, people need to understand that it’s not the be all and end all anymore.

‘It’s difficult knowing that you’re losing a year of your life to treatment which isolates you from the rest of the world, but if the choice is losing one year or not having the next 50 years then you have to realise it’s going to be worth it in the long run.

‘I don’t have a set end date for treatment but coming into it as healthy as I am has put me in the best position that I can be to get through it.’ 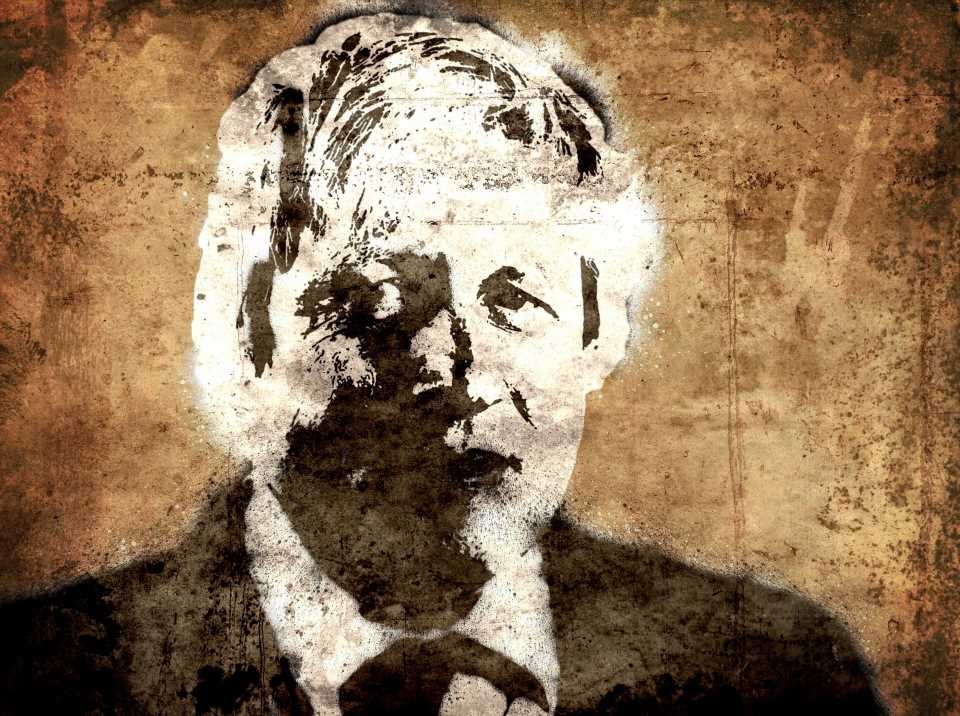