Firefighters working at the World Trade Center (WTC) are more likely to develop cancer than those who were not working at Ground Zero.

Researchers found that New York City firefighters who were at the site during and after the 9/11 attacks had 13 percent higher odds of being diagnosed with cancer, especially prostate and thyroid cancer.

What’s more, the men were about four years younger when the disease was detected compared to their colleagues who also had cancer.

The team, run by the Fire Department of the City of New York, said that although the study cannot establish cause that it shows the immense risk first responders as they battled against the flames and the smoke during the deadliest attack carried out on U.S. soil. 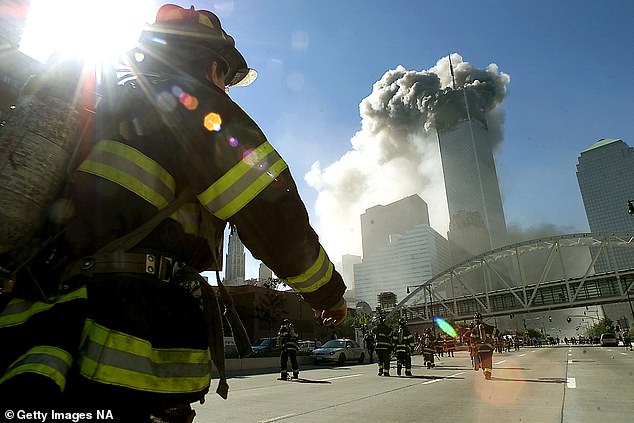 Researchers compared 10,786 firefighters who worked at the WTC site to 8,813 firefighters who didn’t work at the site and found the WTC firefighters were 13% more likely of being diagnosed with cancer than their colleagues. Pictured: Firefighters walk towards one of the tower at the World Trade Center before it collapsed on 9/11

The researchers say that firefighters are often exposed to toxins and carcinogens – substances capable of causing cancers – while on the job.

However, Ground Zero in the immediate aftermath of the attacks was an especially toxic environment.

The men were exposed to asbestos, arsenic, benzene, sulfuric acid  polycyclic aromatic hydrocarbons (PAHs) – a class of chemicals that occur naturally in coal, crude oil and gasoline – and polychlorinated biphenyls (PCBs), which are man-made chemicals.

All of these minerals and chemicals are well-known to increase the risk of cancer.

For the study, published in the journal Occupational & Environmental Medicine, the team looked at 10,786 firefighters who worked at the WTC site during and following the 9/11 attacks.

They were compared with 8,813 firefighters who didn’t work at the site and whom were participants in the Career Firefighter Health Study.

The firefighters were followed either up until their deaths or December 2016.

They determined that firefighters working at 9/11 were 13 percent more likely to develop cancer than the non-WTC firefighters. 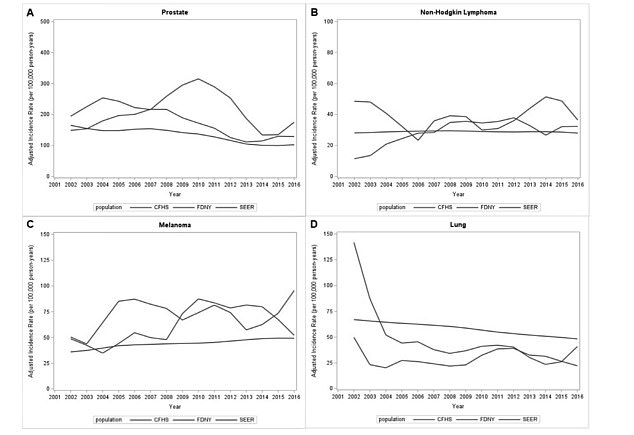 ‘Some proportion of the excess prostate cancer risk may be due to [World Trade Center] exposure on top of usual firefighting risks, as some chemicals, like PCBs, commonly found at building sites, including the [World Trade Center], are known endocrine disruptors, interfering with androgen metabolism,’ the authors wrote.

‘Alternatively, high rates of some cancers, including thyroid and prostate cancers, could have resulted from non-biological factors like enrolment in screening programs, especially [World Trade Center]-related health programs.’

The authors note that the study is observational and they cannot definitively say that working at Ground Zero caused the firefighters’ cancers.

However, ‘two decades post-9/11, clearer understanding of [World Trade Center]-related risk requires extended follow-up and modelling studies (laboratory or animal based) to identify workplace exposures in all firefighters,’ they write.