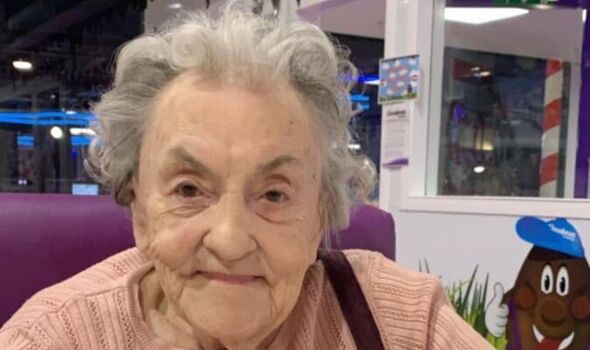 The family of a dementia-stricken grandmother who suffered a bloody head wound after a hospital fall has raised concerns over her care.

Beatrice McNarey had been rushed to the hospital for surgery after breaking her hip at her home in September.

The 91-year-old Glasgow resident spent the night at Queen Elizabeth University Hospital before having surgery the next day.

She was then sent to Gartnavel General Hospital to continue her rehabilitation.

However, her family was shocked to discover her with a bleeding cut on her head following an “unwitnessed” fall on November 13, reports The Daily Record.

Daughter Susan McNarey, 58, and her partner Thomas Bagan, 67, have raised questions about her care and want to know why she was not fitted with a movement alarm despite being deemed a high fall risk.

In medical records, the gran-of-six also had two additional falls in the days prior but was helped safely to the ground by staff.

Thomas said: “When we saw her after the fall, we honestly thought we were going to lose her.

“The staff at Gartnavel are so understaffed and under so much pressure that they can’t get to everyone immediately. We know they’re doing their best.

“But Beatrice has attempted to get up and has fallen over, bursting her head off the sink in her room.

“She didn’t have a movement alarm put on her to let the staff know that she was trying to get up.

“She was classed as a high risk of falls in her medical records but was left unattended.

“After that, we then sat in an ambulance to the Queen Elizabeth University Hospital for hours before she could be seen.

“By this time, she’s really frail and in a bad way.

“They couldn’t put her under so they had to freeze the area of her head for the doctor to remove the haematoma.

“The next day, she was taken back to Gartnavel to recover.”

He added: “These doctors and nurses are run off their feet. They’re completely understaffed. There’s just not enough of them. But I wouldn’t let a dog be treated the way Beatrice was.

“After the fall, she just started babbling and not making any sense.

“After the operation to close the wound, she started talking normally again which was a big relief.

“When your loved one is in hospital, you expect them to be safe. We just feel disgusted that it’s happened.

“Thankfully she doesn’t really understand what’s gone on. She just kept asking where she was and why she was in the hospital.

“But no one should ever have to see their mother like that. Falls in someone her age can be deadly.”

Daughter Susan added: “When I found out what had happened to mum, I was devastated.

“I’m still shocked by the lack of care which could have been avoided if she had been monitored properly.”

Beatrice has since been discharged from hospital into the care of a relative and is recovering well.

A statement from NHS Greater Glasgow and Clyde said: “While we cannot discuss any individual patient, we would like to apologise if Ms McNarey’s family are not happy with any aspects of the care she received.

“We are in regular contact with Ms McNarey’s next of kin and she is now receiving regular care at home.”