EXCLUSIVE: Are hand sanitizers a cancer risk? THOUSANDS of gels and sprays have been recalled since 2021 because they may contain deadly chemical – after becoming everyday essential during pandemic

Nearly two dozen hand sanitizer brands have been recalled or banned in the US after they were found to contain a cancer-causing chemical.

Thousands of bottles made in China, South Korea and in America were pulled from shelves between April 2021 and September this year.

The gels and sprays — which have become a mainstay during the Covid outbreak — were found to contain dangerous levels of benzene, a carcinogen at the very top of the Government’s most dangerous solvent list.

It comes after more than a million bottles of dry shampoo were recalled last month over benzene contamination fears.

In total 21 brands of hand sanitizer have been recalled including products made by The Creme Shop and Ulta Beauty, plus lesser-known sanitizers sold in TJ Maxx, Marshalls and online.

Some of the products appear to have been targeted at children with packaging including Star Wars’ character Yoda, Disney figures and Spiderman.

When rubbed onto the hands, even in relatively small doses, benzene can seep through the skin and into the blood stream where it can stop cells working correctly. It is known to cause leukemia and other blood disorders.

The recalls were for specific batches of products, with many ending up back on shelves after the contamination issue was addressed. Some foreign-made products have been banned completely, however, after failing to comply with the Food and Drug Administration’s (FDA) request for a recall. 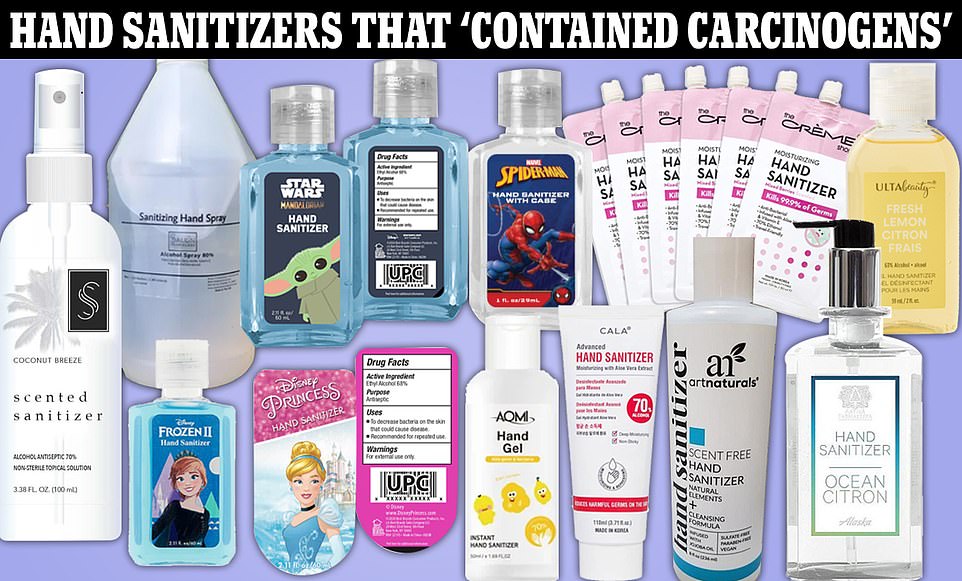 Pictured above are the hand sanitizers that were either recalled or banned from entering the US after benzene was detected in the products. The recalls affected lots, with those currently on the shelves not thought to be contaminated

WHICH HAND SANITIZERS HAVE BEEN RECALLED DUE TO BENZENE?

The below hand sanitizers have been recalled by the FDA or had an import ban put in place due to benzene contamination. The list is published on the agency’s website:

Many of the hand sanitizers were found to contain more than the interim legal limit of two parts per million (ppm) of benzene which was in place during the pandemic to help ramp up production in 2020.

Others were recalled after containing much lower levels when the limit was brought back down to zero in 2022.

Benzene may inadvertently end up in hand sanitizers during the manufacturing process when the gels are treated to remove impurities.

Purification is done using a chemical made with benzene, which can sometimes still contain trace amounts of the carcinogen.

The scale of the health impact of benzene-contaminated hand sanitizers in the US is yet to be fully understood — but there have been no reported injuries so far.

Benzene is a cancer-causing chemical, also known as a carcinogen, that is widely used in manufacturing in the US.

It is used in the creation of plastic, nylon, rubbers, paint and glue products.

It can also be found in tobacco smoke, motor vehicle exhaust and industrial emissions.

Long-term exposure to the chemical has been linked to severe damage to a person’s blood.

In has been linked to blood cancers like leukemia and non-Hodgkin lymphoma.

The chemical has also been linked to anemia.

Hand sanitizers became a mainstay in homes, schools and offices during the pandemic, with sales shooting up by 600 per cent in 2020 alone.

Among the products that have been recalled are Scent Free hand sanitizer by Artnaturals, sold in 8oz bottles at $3.50 each, and three brands from Scentsational Soaps and Candles sold for around $7 each.

Artnaturals faced the biggest recall to date last year when 34 different brands had to be returned over benzene contamination fears.

The agency also brought in a temporary legal limit of up to two ppm of benzene permitted in the products to help speed up production – amid fears over a national shortage.

The loophole was scrapped earlier this year, however, with the FDA saying there was now enough hand sanitizer available in the US.

The most recent recall came in September, and involved a product made in Florida — a sanitizing hand spray from Salon Technologies International.

The FDA asked the company to issue a voluntary recall after finding that the product contained benzene.

Hand sanitizers from China-based Ningbo Haishu Huayu Industry and Trade and South Korean manufacturer Mirfeel Korea Co are no longer allowed to be imported into the US, after the companies failed to issue a recall when benzene was found in their gels.

The FDA says benzene should not be used when making hand sanitizers, with those found to contain the chemical now being recalled as detailed in a list on the agency’s website.

Benzene is normally detected in crude oil, as well as in plastics, resins, and some dyes and pesticides.

Last year an independent lab found nearly one in five hand sanitizers may contain benzene. Valisure tested 260 bottles of hand sanitizer from 168 brands for the carcinogen that were bought in pharmacies across the US.

A total of 21 were found to contain more than the previous limit of two parts per million. Benzene is at the top of the FDA’s list of dangerous solvents.

Inhaling or absorbing the chemical over a long period of time can have devastating health effects because it causes cells in the body to work incorrectly.

Overexposure to benzene can also cause bone marrow not to produce enough red blood cells, which can lead to anemia, as well as blood cancer.

It can also wreak havoc on the immune system by altering blood levels of antibodies and killing off white blood cells.