British sellers are charging up to four times the NHS price for HRT medication on eBay as they cash in on a national shortage, MailOnline can reveal.

The most popular type of oestrogen gel was selling for £40 on the online marketplace last week — quadruple the NHS prescription charge of £9.35.

MPs have warned desperate women are being ‘exploited’ after it emerged over the weekend private pharmacies are also hiking up their prices.

Shortages and poor planning mean thousands have been unable to get drugs to help ease menopause symptoms such as low mood, brain fog and hot flushes.

It came as a US study published today indicated the menopause can physically ‘reshape the brain’ — sometimes irreversibly.

MailOnline found three eBay listings for Oestrogel, a drug which is used by around 30,000 women in the UK and is particularly low in stock.

There are fears some women could be priced out of crucial treatments just as the cost-of-living crisis bites.

One seller, based in Uxbridge, London, charged £40 for one month’s supply, and £5.55 for postage 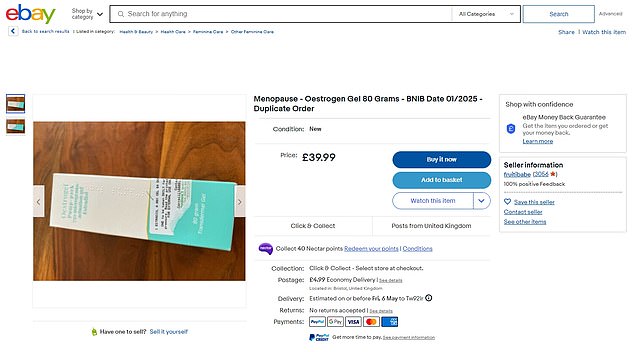 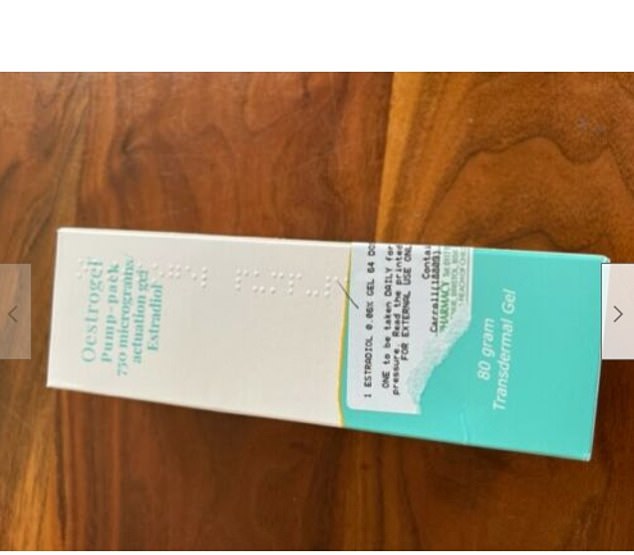 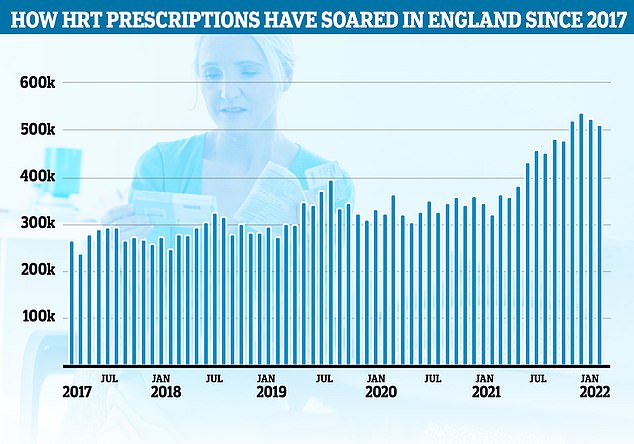 There were about 512,000 NHS prescriptions written for ‘female sex hormones and their modulators’ in England in February, the latest official data shows, compared to 265,000 in March 2017. Many of these will be HRT medications but some may include other female hormone drugs such as contraceptives

Prescriptions for HRT medication have doubled in England in just five years as women and GPs become increasingly aware of the excruciating and wide-ranging symptoms of the menopause.

An increasing number of desperate women have had to ration their prescriptions or have turned to the black market or abroad.

Two of the eBay listings for Oestrogel were sold and a third was removed by the seller at the time of writing.

One still had a prescription slip on the packaging and the seller claimed they had received a ‘duplicate order’.

MailOnline found the products online on Friday  — the same day the Government announced a ration on some HRT products to a three-month supply.

The move, which affects Oestrogel, as well as Ovestin cream and Premique low-dose tablets, is the first to address supply issues since the appointment of HRT tsar Madelaine McTernan.

Those who have prescriptions longer than three months will not have to pay an extra charge.

There has been a big increase in women seeking HRT, with an estimated 538,000 prescriptions issued in December, compared with 238,000 in January 2017.

As a postcode lottery means many are looking online for HRT, some online pharmacies have also been found to be selling a three-month supply of Oestrogel for £80.

Prices vary wildly, however, with Oxford Online Pharmacy selling the same product for £49.99.

Pharmacy Planet is rationing its sales of Oestrogel to one-month batches due to ‘limited stock’, but at £42 each.

Alternatives to Oestrogel have also taken a hit as women switch to different medication until stocks are replenished.

Treated.com is selling one month’s worth of Estradot patches for £32, although women can normally get a three-month supply for £9.35 on the NHS.

The Independent Pharmacy prices a three-month supply of Estradot and Sandrena – an Oestrogel alternative – at £75 each.

There is no suggestion these online pharmacies, registered with the Care Quality Commission, are handing out unsafe medicine.

Labour MP Carolyn Harris, co-chairman of the UK menopause taskforce, told The Mail last week that it was ‘exploitative of women’.

A team of US researchers found menopause — when women stop having periods and oestrogen levels decline — ‘reshapes the brain’ by reducing grey matter and affecting blood flood.

They believe changes in the hypothalamus, which regulates body temperature, are behind hot flushes, while a drop in oestrogen interferes with energy levels in the brain, which could cause brain fog.

The researchers, from Weill Cornell Medical College in New York and the University of Arizona, spotted the changes after examining brain scans from 161 women aged 40 to 65 and comparing them against 125 men of the same age.

They said taking HRT as soon as menopausal symptoms begin can protect against these changes.

The findings are set to be highlighted in a new documentary presented by Davina McCall, who has raised awareness about her own battle with the menopause. It will air tonight on Channel 4.

BRITAIN’S HRT CRISIS: WHY THE UK IS SEEING DEMAND SOAR AND SUPPLY DRY UP

Women are having to deal with a shortage in hormone replacement therapy (HRT) supplies amid rising demand for such treatment.

Hormone replacement therapy (HRT) is a treatment to relieve symptoms by replacing hormones that are at a lower level as women approach the menopause.

What is the current situation with supply?

The Royal Pharmaceutical Society (RPS) said prescriptions for HRT have more than doubled in England over the past five years, from 238,000 in January 2017 to almost 538,000 in December 2021.

The Department of Health (DH) said demand for HRT has dramatically risen, with a 38 per cent increase in the number of prescription items over the last seven years.

Why has demand soared?

The DH said there is greater awareness around the menopause and more confidence among GPs in prescribing HRT.

What is the knock-on effect of this higher demand?

Acute shortages have reportedly caused women to share prescriptions, with some said to be made suicidal by the debilitating menopause symptoms they suffer without the medication.

The DH said while most of the 70 HRT products available in the UK remain in good supply, a range of factors including an increase in demand has led to shortages of a limited number of products including Oestrogel.

What is the Government doing about it?

At the end of April, the Government announced that Vaccine Taskforce director general Madelaine McTernan had been appointed to spearhead a new HRT Supply Taskforce.

Her role will involve identifying ways to support the HRT supply chain and address shortages some women face on a limited number of products, the DH said.

Health Secretary Sajid Javid said Ms McTernan will ‘use her excellent skills and expertise to build on the success of the Vaccine Taskforce to bolster supply of vital medicines to women across the country’.

The DH also said it was issuing serious shortage protocols (SSPs) to limit the dispensing of three products in high demand to ensure women are able to access the HRT they need.

The SSPs are set to expire on July 29 and are aimed at allowing community pharmacists to supply the three specified HRT products according to the protocol rather than the written prescription, without needing to seek authorisation from the prescriber.

The DH said this will ‘even out’ distribution of in-demand products such as Oestrogel.

What is the HRT taskforce responsible for?

The Government said the taskforce will engage with HRT suppliers to ensure there is a good understanding of supply constraints and what is being or can be done to address them in the short and long term.

It will also work with the NHS Business Services Authority to secure access to real-time HRT dispensing data in order to improve understanding of supply, demand and what is driving shortages.

The taskforce will also be expected to engage with professional bodies including the Royal College of GPs, Royal College of Obstetricians and Gynaecologists and the Pharmaceutical Services Negotiating Committee to support pharmacists and prescribers to ensure they respond appropriately to increased demand.

What about prescription charges?

The DH said it is taking action to increase access and reduce the cost of HRT by allowing women to pay a one-off charge equivalent to two single prescription charges, currently £18.70, for all their HRT prescriptions for a year.

Known as a prepayment certificate, it is intended to mean women can access HRT on a month-by-month basis, easing pressure on supply, while keeping the cost of HRT low. This system will be implemented from April 2023.

Is this soon enough?

Not according to the RPS, which described the timeline as ‘disappointing’.

Thorrun Govind, chair of the RPS in England, said: ‘Delaying this move will frustrate many who already pay for monthly HRT prescriptions and will further drive health inequalities already experienced by women across the country.’

She said HRT prescriptions are ‘essential’ but also ‘a financial drain during a cost-of-living crisis’ as she called for prescription charges for such treatment to be scrapped entirely in England.