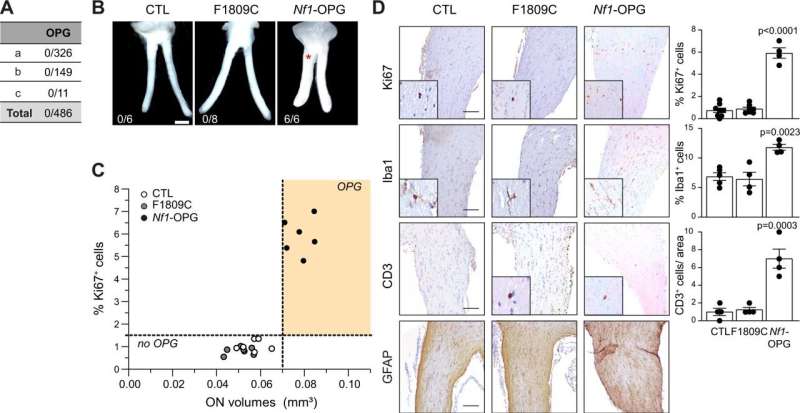 People with neurofibromatosis type 1 (NF1) develop tumors on nerves throughout their bodies. These tumors are usually benign—meaning they don’t spread to other parts of the body and are not considered life-threatening—but they can still cause serious medical problems such as blindness, especially when they form in the brain and nerves.

Researchers at Washington University School of Medicine in St. Louis have discovered that neurons carrying a mutation in the Nf1 gene are hyperexcitable and that suppressing this hyperactivity with lamotrigine, a drug approved by the Food and Drug Administration to treat epilepsy, stops tumor growth in mice.

“Tumors are very common in people with NF1,” said senior author David H. Gutmann, MD, Ph.D., the Donald O. Schnuck Family Professor and director of the Washington University Neurofibromatosis (NF) Center. “We’ve shown that we can block the growth of NF1 tumors by shutting off neuronal hyperexcitability. We’ve done it now a couple of different ways, and there’s no question that repurposing antiepileptics is an effective way to inhibit tumor growth, at least in mice. This underscores the critical role that neurons play in tumor biology.”

The study is published May 19 in Nature Communications.

NF1 is a genetic disorder that affects one in every 3,000 people worldwide. The condition is caused by mutations in the NF1 gene. Any part of the body can be affected, but the most common signs of the disorder are light brown spots on the skin, benign nerve tumors called neurofibromas, tumors of the brain and optic nerves, bone deformities, and cognitive differences such as autism, learning disabilities and attention deficit hyperactivity disorder.

Last year, Gutmann and Michelle Monje, MD, Ph.D., a professor of neurology at Stanford University School of Medicine and a Howard Hughes investigator, showed that light induces increased neuronal activity in the eyes of Nf1-mutant mice, which then causes tumors to form on the optic nerve that connects the eyes and the brain. In the new study, they—along with first author Corina Anastasaki, Ph.D., an assistant professor of neurology at Washington University, and co-author Lu Q. Le, MD, Ph.D., a professor of dermatology at the University of Texas, Southwestern Medical Center—investigated how increased neuronal activity leads to tumors in people with NF1.

The researchers studied neurons from mice with and without Nf1 gene mutations. At baseline, neurons from mice with tumor-causing Nf1 mutations fired electrical impulses more frequently than neurons from normal mice. These hyperexcitable neurons then released molecules that increased the growth of brain and nerve tumors. This hyperexcitability, the researchers discovered, was the result of a dysfunctional ion channel that changed the baseline electrical activity inside the neurons.

They also studied mice with an Nf1 mutation seen in people with NF1 who do not develop brain or nerve tumors. Anastasaki found that neurons from mice with this specific Nf1 mutation are not hyperexcitable and do not develop tumors—providing the first explanation for why this group of patients with NF1 lack optic gliomas or neurofibromas.

Hyperexcitable neurons are also a feature of epilepsy, and the epilepsy medication lamotrigine targets the same ion channel disrupted in hyperexcitable Nf1-mutant neurons. The researchers gave lamotrigine to a group of Nf1-mutant mice that develop optic nerve tumors. Compared to mice receiving placebo, mice that had received the drug had smaller tumors, which no longer were growing.

Apart from suggesting a new way to treat NF1 tumors, these findings also suggest a new way of thinking about the origins of the disorder’s cognitive symptoms.

“The mutation in the Nf1 gene changes the basic biology of the neuron,” Gutmann said. “During development, neurons form first and tell the rest of the brain how to form. If you have a mutation that affects how neurons behave, that may change everything about how the brain gets set up during development. Nothing we’ve tried so far to prevent learning disabilities has worked. Maybe this discovery could lead to new treatments for the learning and cognitive problems in children with NF1.