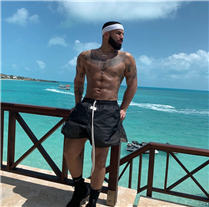 Drake is firing back at claims that he went under the knife to get a new set of abs.

The “Hotline Bling” rapper and Degrassi: The Next Generation alum, 32, defended his six-pack on Instagram, Thursday, after sharing a shitless snapshot of himself posing against a aqua-colored ocean.

“I forget what it’s called but I remember the feeling,” Drake captioned the shot.

Minutes after he posted, Drake’s pal DJ Carnage decided to call out the rapper — writing in the comments section, “You got fake ab surgery in Colombia. You ain’t fooling anybody.”

Those rumors have long followed Drake for years (podcaster Joe Budden previously spread them back in 2016), but this time, Drake addressed them directly.

“Is this cause you are angry about the one thing that happened with that one person the other day that you thought was your wifey?” Drake clapped back, getting personal.

While things seemed tense, Drake quickly clarified to fans that all was in good fun. “Aye relax we friends in real life,” he said.

Meanwhile, Drake’s trainer Johnny Roxx chimed in to make it clear that Drake’s fit physique was all natural. “Holla at me and I’ll get you right too,” he told Carnage.

Drake may not have gotten plastic surgery on his slim stomach, but Jersey Shore‘s Ronnie Ortiz-Magro sure did.

On Thursday, PEOPLE premiered an exclusive clip from The Doctors, airing Friday, in which the new dad explains he decided to “try something new” and get liposuction on his stomach because he hasn’t been able to get in the gym as much as he would like.

“I’ve always been a workout fanatic, and I’ve also always been in shape, but it takes a lot of hard work to stay in shape,” Ortiz-Magro said. “One year ago today my life completely changed. I had a little baby girl. She’s like my guardian angel, and now I can’t spend two to three hours every day in the gym like I used to.”

Dr. Christopher Khorsandi was there to help. In the clip, the plastic surgeon met with Ortiz-Magro to walk him through the procedure.

“We’re going to do something today for Ronnie that wasn’t even available ten years ago,” Khorsandi said. “This is laser high-definition liposuction of the abdomen. We’re going to be able to get that area in between each of his abs completely defined, so that he actually has a six-pack for many, many years to come.”

The procedure is permanent, as long as Ortiz-Magro sticks to a healthy diet, Dr. Khorsandi said. The liposuction doesn’t stop him from ever gaining weight again, but it will go to other parts of his body, and stay out of the abdominal area.

As easy as it sounds, surgery comes at a cost. The four-and-a-half-hour procedure costs between $20,000 to $30,000. It also requires a difficult recovery — one that was particularly tough for Ortiz-Magro, who is sober after recently going to rehab and is therefore only taking Advil for the pain.

“I’m feeling like complete crap,” he told Dr. Travis Stork over the phone just a few days after his surgery. “It has not been a good experience.”