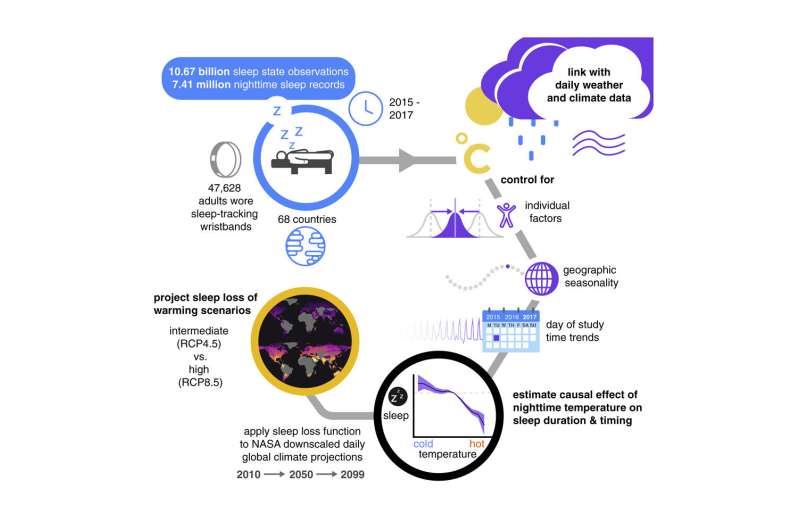 Most research looking at the impact of climate change on human life has focused on how extreme weather events affect economic and societal health outcomes on a broad scale. Yet climate change may also have a strong influence on fundamental daily human activities—including a host of behavioral, psychological, and physiological outcomes that are essential to well-being. In a study published May 20th in the journal One Earth, investigators report that increasing ambient temperatures negatively impact human sleep around the globe.

The team says their findings suggest that by the year 2099, suboptimal temperatures may erode 50 to 58 hours of sleep per person per year. In addition, they found that the temperature effect on sleep loss is substantially larger for residents from lower income countries as well as in older adults and females.

It’s long been known that hot days increase deaths and hospitalizations and worsen human performance, yet the biological and behavioral mechanisms underlying these impacts have not been well understood. Recent self-reported data from the United States have suggested that subjective sleep quality decreases during periods of hot weather, but how temperature fluctuations may impact changes in objective sleep outcomes in people living across a variety of global climates has remained unclear.

“In this study, we provide the first planetary-scale evidence that warmer-than-average temperatures erode human sleep,” Minor says. “We show that this erosion occurs primarily by delaying when people fall asleep and by advancing when they wake up during hot weather.”

To conduct this research, the investigators used anonymized global sleep data collected from accelerometer-based sleep-tracking wristbands. The data included 7 million nightly sleep records from more than 47,000 adults across 68 countries spanning all continents except for Antarctica. Measures from the type of wristbands used in this study had previously been shown to align with independent measures of wakefulness and sleep.

The study suggested that on very warm nights (greater than 30 degrees Celsius, or 86 degrees Fahrenheit), sleep declines an average of just over 14 minutes. The likelihood of getting less than seven hours of sleep also increases as temperatures rise.

“Our bodies are highly adapted to maintain a stable core body temperature, something that our lives depend on,”  Minor says. “Yet every night they do something remarkable without most of us consciously knowing—they shed heat from our core into the surrounding environment by dilating our blood vessels and increasing blood flow to our hands and feet.” He adds that in order for our bodies to transfer heat, the surrounding environment needs to be cooler than we are.

Early controlled studies in sleep labs found that both humans and animals sleep worse when the room temperature is too hot or too cold. But this research was limited by how people act in the real world: they modify the temperature of their sleeping environment to be more comfortable.

In the current research, the investigators found that under normal living routines, people appear far better at adapting to colder outside temperatures than hotter conditions. “Across seasons, demographics, and different climate contexts, warmer outside temperatures consistently erode sleep, with the amount of sleep loss progressively increasing as temperatures become hotter,” Minor says.

One important observation was that people in developing countries seem to be more affected by these changes. It’s possible that the greater prevalence of air conditioning in developed countries could play a role, but the researchers could not definitively identify the reason because they did not have data on air conditioning access among subjects. The researchers also note that because they uncovered compelling evidence that the impact of warming temperatures on sleep loss is unequal globally, new research should especially consider more vulnerable populations, particularly those residing in the world’s hottest—and historically poorest—regions.