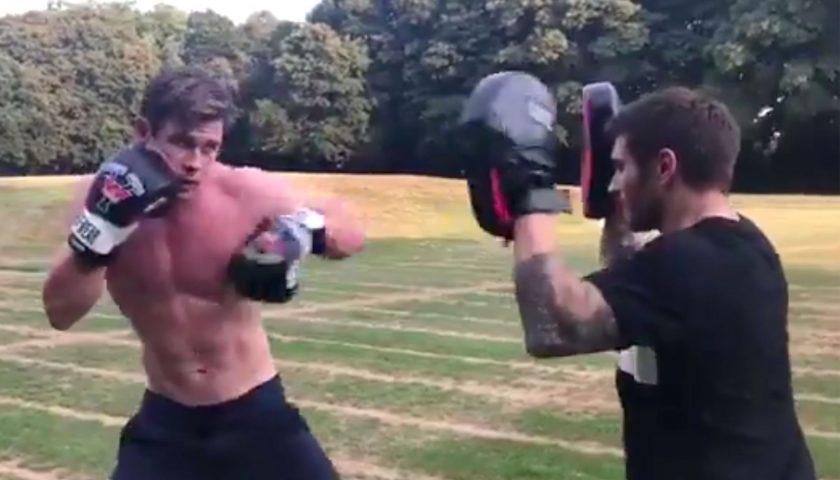 Who knew hard work could look so good?

While preparing for his upcoming role in the latest Men in Black film, Chris Hemsworth documented an outdoors shirtless sweat session.

“Outdoor session in London for MIB!!” he wrote alongside the steamy clip, which shows the 34-year-old actor throwing punches at his trainer before getting a piggyback ride.

“Cheers to @zocothebodypro for posing as an alien and letting me beat up on him,” Hemsworth added, before apologizing to his trainer “for the boot in the face.”

According to The Hollywood Reporter, the latest installment of the classic franchise is scheduled to begin production in London this month.

Earlier this month, the Thor star surprised Elsa Pataky, his wife of eight years, with a salsa lesson in honor of her 42nd birthday during their romantic getaway to Spain, where Pataky is from.

“Gave my wife a dance lesson for her birthday, I should’ve given myself one too Happy Birthday love @elsapatakyconfidential,” Hemsworth captioned the footage of his humorous tutorial, jokingly adding the hashtags #danceismylife and #salsa4life.

“Best birthday ever, with all the people I love, especially this one, always making me laugh!” Pataky captioned a selfie of the pair, who share three children: daughter India Rose, 6, and twin sons Tristan and Sasha, 4.

Opening up to Vogue Australia earlier this year about the beginning days of their relationship, Pataky candidly admitted that she’s not sure “how we survived as a couple.”

The two met in 2010 and married later that year — before Hemsworth made Thor and quickly became a household name thanks to the Marvel movies.

“In the beginning it was beautiful – when I met him he wasn’t known at all and I grew with him and experienced all his successes and changes, and then he became just so huge and I’ve been sharing that too,” she said. “Going through every moment and being there with him with every success was actually a good thing – we grew together. It’s difficult when you go from being an unknown person to a very known person and all the changes that come with that.”

“We did everything very quickly — I don’t know how we survived as a couple,” the Fast and the Furious actress added. “We were married and then a year after we had kids. It puts a lot of pressure on a marriage, but we came out good because there is a lot of love between us and we are very strong personalities but love each other so much. We make it work.”