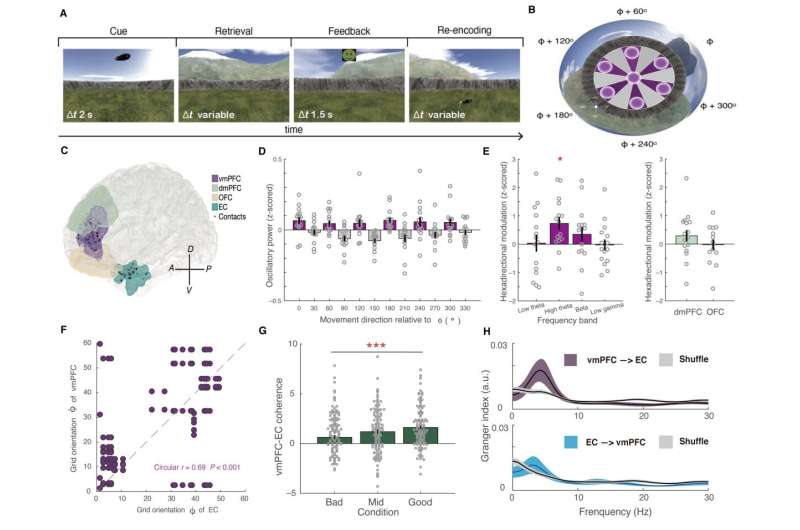 Led by Dr. Wang Liang from the Institute of Psychology of the Chinese Academy of Sciences (CAS), the researchers found that theta oscillations in the mPFC and EC exhibited grid-like representations that coordinated with each other and predicted navigational performance.

The study provides novel insights into the neural signature of the cognitive map and the functional role of grid codes during human spatial navigation.

The human brain creates a cognitive map of the surrounding environment to efficiently support spatial memory and guide flexible behavior in physical space. Place cells in the hippocampus and grid cells in the EC are the cellular components of the neuro navigation system. Grid cells have been identified in human EC and mPFC with a crucial role in conceptual space.

Individual neurons never fire in isolation and are not able to regulate complex cognitive behaviors, such as spatial navigation. Instead, synchronized firing neurons induce neural oscillations and form a functional network.

In the current study, the researchers recorded mPFC and EC neural activity in drug-resistant epilepsy patients using depth electrodes invasively implanted in the brain by neurosurgeons, while patients played an object-location memory task in a virtual environment.

The patients were asked to remember the spatial location of eight objects and were tested on memory performance. They were able to utilize feedback information to improve their behavioral performance.

The researchers found that theta oscillations in the human ventromedial prefrontal cortex, rather than in the orbital frontal cortex or dorsal mPFC, exhibited a six-fold rotationally symmetric modulation as a function of movement direction.

Furthermore, the researchers also found that grid orientations appeared to be consistent between the EC and mPFC, suggesting that these regions coordinated information processing to generate a coherent cognitive map for the encoding and retrieval of spatial memories.

Theta synchronization was correlated with this inter-regional consistency of grid representations and can predict the accuracy of spatial performance.

This study sheds light on the neural mechanisms underlying navigation and memory in humans, providing new insights into how mPFC–EC neural circuits at the mesoscopic level deal with grid information.

Many neurodegenerative diseases even in the early stage are associated with spatial disorientation and spatial memory deficits, such as Alzheimer’s disease. Therefore, it is crucial to understand the underlying neuronal mechanisms. This study may help identify novel biomarkers for such neurological disorders.