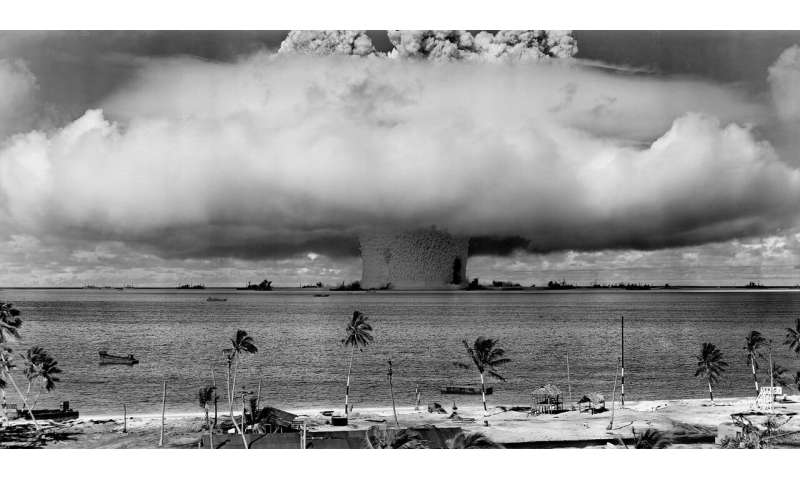 The pulse of environmental carbon-14 released by atom bomb tests in the early years of the Cold War has allowed researchers to understand how humans can still mount an immune response to diverse pathogens well into their 50’s and 60’s, according to a study led by Jonas Frisén at the Karolinska Institute in Sweden, publishing on October 29 in the open-access journal PLOS Biology.

T cells, which are produced by the thymus and represent one of the major arms of our immune defences, have unique and highly variable cell surface receptors that allow them to detect specific molecular patterns presented by pathogens or cancerous cells. Thus, the diversity of a person’s T cell repertoire determines the diversity of pathogens and cancer cells that their immune system can target. But as we age, new T cells are no longer produced by the thymus; instead the T cell pool is maintained by existing T cells replicating clonally.

To investigate how this process is regulated to prevent a loss of T cell diversity with age, the researchers isolated naïve T cells from blood samples of 59 healthy adults and exploited a unique global “experiment.” During the 1950s and 60s, the nuclear weapon tests resulted in a substantial global release into the atmosphere of the radioactive isotope carbon-14 that has since been incorporated into the DNA of the human population.

This handy pulse allowed the scientists to use carbon-14 DNA dating to probe the life history of T cell populations. They found that there is a constant turnover of all naïve T cells, but the frequency of cell turnover declines with age from an average of 1.7 years in 20-30-year-olds to 6.6 years in 50-65-year-olds, helping individuals to maintain T cell numbers despite the declining production in the thymus.

The authors also used mass cytometry to show that levels of the CD31 protein–which is highest in T cells produced by the thymus but then progressively dilutes with each clonal division–are correlated with phosphorylation of a transcription factor, NF-kB, which is known to be essential for T cell replication. This means that T cell clones that have divided many times since their production (and are therefore more numerous) are less likely to do so again. The authors suggest that this negative feedback loop may help to prevent certain T cell types coming to dominate the immune cell pool, which would thereby reduce the diversity of pathogens that can be detected.