It is the biggest sporting event globally, with around half the world tuning in, so you’ll be in good company if you’re up in the wee hours of the morning to watch the World Cup, which kicked off on Monday.

Over 29 days, 32 teams from around the world including Australia, will compete to be crowned king of the planet’s most popular game. 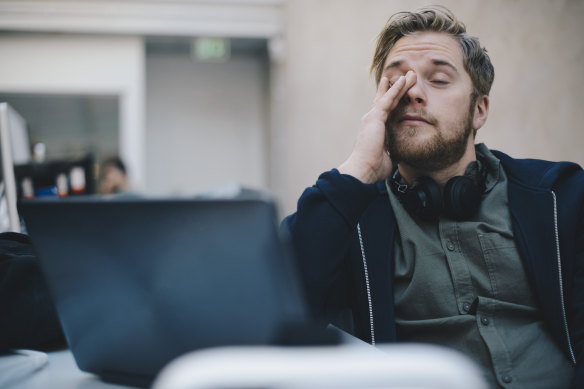 Losing sleep over the World Cup? There are ways you can manage it.Credit:Getty

But with matches being played at strange hours of the night – Australia’s matches are on at midnight, 2am and 6am in the controversial Qatar (where thousands of migrant workers died building the eight new stadiums for the event) – and daytime responsibilities to uphold, how can you get through the month without losing all of your sleep?

The Socceroos face reigning world champions France in their first on Wednesday morningbefore taking on Tunisia on Saturday at 9pm and Denmark next Thursday at 2am as part of the first rounds. For more than one million Brits living in Australia, England take on the USA on Saturday at 6am, and Wales on Wednesday at 6am.

Moira Junge the chief executive of the Sleep Health Foundation is pretty sure no die-hard fan will take her best sleep advice: to record the match and watch it later once adequate sleep has been achieved.

Thankfully, you can still have your soccer cake and eat it too. Sort of.

Shifting your sleep schedule and learning the art of the nap can also get you through a month of disrupted sleep relatively unscathed.

Modifying your sleep schedule for the month can help, if you can manage to do it.

It’s hard going to bed at 7pm, especially when it’s still daylight, food hasn’t been properly digested, you haven’t had the chance to unwind from work and others in the household are still up. It’s harder still if you’re a nightowl. If you are, it’s not worth “getting caught up in a cycle of frustration”, Junge says.

“We can all cope with reduced sleep every now and then,” Junge says.

Though we can cope, it’s important to be aware of the short-term risks that come with not getting enough sleep such as impaired ability to drive, operate machinery, and “be pleasant to fellow citizens”.

So, if you can manage to go to bed early to compensate for the early wake-up then she recommends it: “If you can alter your sleep schedule go for it, that’s the wisest thing to do.”

If not, napping, to a degree, can nip in the bud the crankiness and lethargy that come from being overtired.

“Short naps when sleep-deprived are very helpful,” Junge says. The reason short naps are better than long naps is that it typically takes 20-30 minute to drift into a deeper stage of sleep. “If the nap is longer than this it’s likely the person will wake up out of deep sleep which means they are groggy, confused, disoriented.”

She adds: “That’s why the road safety messages about having short naps are often recommended to be 15-20 minutes maximum.”

It generally takes 5-to-10 minutes (if not more) to fall asleep so setting an alarm for 30 minutes reduces the likelihood of waking up out of deep sleep.

The other reason long naps aren’t recommended is that they can disrupt our normal routine too much and make it difficult to fall asleep at night when we are trying to. Junge adds everyone is slightly different: “Longer naps might be appropriate for some people – experimenting with this is best to work out your sweet spot.”

Experimenting with nappuccinos can bring more bang to your nap time buck too. What? Caffeine levels peak about 30 minutes after we have a coffee so drinking a cappuccino (or latte if you’re Melburnian) before a 20-minute nap provides the double dose benefits of sleep and extra alertness.

Sip on that. Or just record the game.