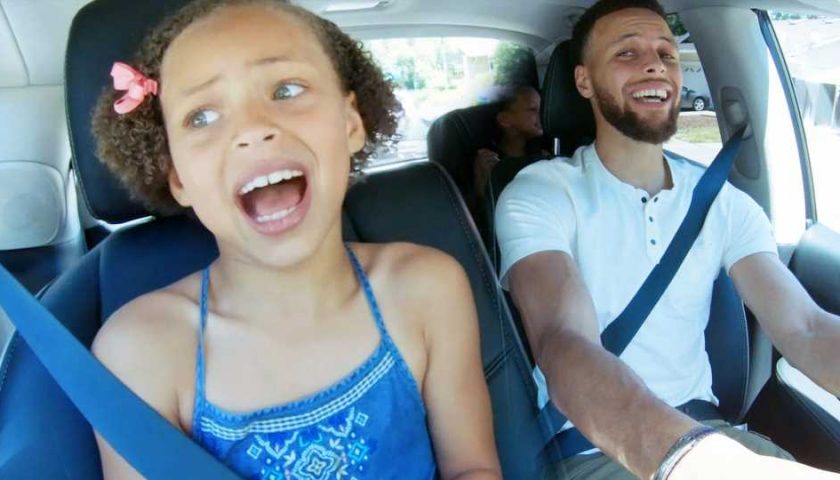 We all knew NBA star Steph Curry can expertly sink a three-pointer, but who knew he could belt a tune as well?

The Golden State Warriors point guard, 31, shows off his pipes — and his skills as a doting dad — in a new YouTube series called Life, Lived, with his production company Unanimous Media and Infiniti.

In the adorable clip, Curry corrals his two girls Ryan Carson, 4, and Riley, 7 on Friday, into his car for a Hamilton sing-a-long à la Carpool Karaoke that could rival Broadway’s best and brightest.

“I’m gonna take a drive with my daughters, give you guys a glimpse at what it’s like riding in the car with us,” he says. “There’s a lot of singing, a lot of ice cream, a lot of fun times.”

With the promise of a surprise, Curry straps his daughters with wife Ayesha Curry into their seats, and they’re off to their mystery destination as Riley cracks jokes.

“What do you call a cow with no legs?” she asks her dad, who replies, “Ground beef,” with a hilarious fake laugh.

Soon, the show begins as Curry starts to blast “You’ll Be Back” from the smash musical. “Uh oh, it’s that Hamilton! Ryan, you know the words, right?” he asks his younger child, who’s situated in the backseat.

Both Ryan and Riley prove that they do, in fact, know the words, as the father-daughter trio passionately belts along to each and every lyric.

“You gotta sing it loud!” the NBA star yells as they go for the song’s falsetto notes.

Eventually, the group arrives at their surprise destination: the ice-cream shop! And after a quick break, the three return to their car, cones in hand, as Riley sweetly encourages younger sister Ryan to keep licking her melting treat to prevent it from dripping.

The family finishes off the trip with one final note of “You’ll Be Back,” after which Riley declares the day the “best surprise ever.”

Ayesha, 30, and the couple’s 1-year-old son Canon W. Jack were absent from the clip, but Curry did give his wife a special shout-out, telling his daughters to take note in the beginning.

Curry frequently shares sweet snapshots of life with his young children, and in May, showed off his skills as a hairstylist doing Ryan’s hair in an episode of his Facebook Watch show Stephen vs The Game.