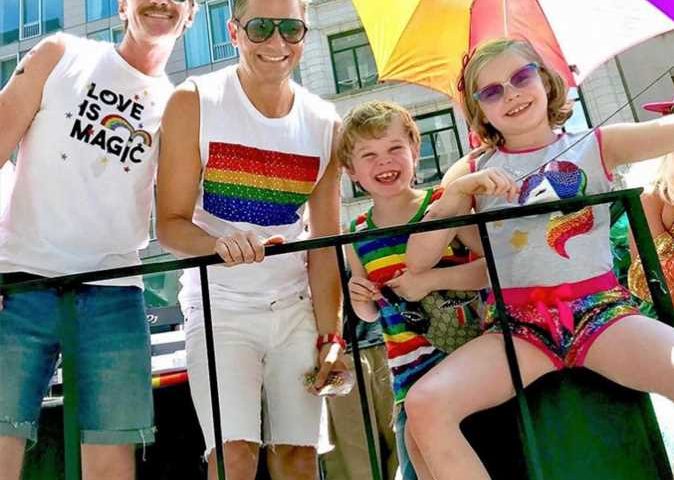 It was a day of love for Neil Patrick Harris and David Burtka on Sunday.

The spouses took their twins — 8½-year-old Gideon Scott and Harper Grace — to the 2019 NYC Pride March, where the family of four donned vibrant, sparkly attire for the day’s festivities.

While the 46-year-old actor wore a “LOVE IS MAGIC” tank top, his husband sported a white tank with a rainbow print. And their kids committed even more to the colorful atmosphere, with Harper rocking a unicorn tank and glittery shorts alongside her brother in a rainbow striped tank top.

“What a spectacular day. What a spectacular time. World Pride 2019 in NYC was an extraordinary experience, seeing literally millions of people spreading love and positivity,” Harris captioned one group shot taken during the parade. “No conflict. No problems. Just love. So honored to share this with my husband @dbelicious and with our kids. Just an overwhelming outpouring of love. #grateful“

Burtka shared his own image from the event, which showed the family of four posing with the brick facade of the Stonewall Inn in the background. (The event also marked the 50th anniversary of the Stonewall Riots, which launched the gay-rights movement.)

A cute video on Harris’ Instagram Story saw the How I Met Your Mother alum and his brood dancing to “Call Me Maybe” by Carly Rae Jepsen aboard a float as gatherers cheered and waved rainbow flags.

“It’s World Pride, baby!” Harris said, with Burtka chiming in, “World Pride!” before the camera panned over the excited crowd celebrating in the city streets below.

The fathers of two recently celebrated their 15th anniversary this past April, marking the milestone occasion with dinner at Manhatta, a fine-dining restaurant with breathtaking views perched 60 stories above lower Manhattan in New York City.

“It’s our 15th anniversary and I got surprised by this guy,” the former Doogie Howser, M.D. actor said in a video on his Instagram Story. “Look at our view! Hope you’re not afraid of heights.”

He also dedicated a sweet post to Burtka, writing, “My first date with David was 15 years ago today, and we’ve been nearly inseparable ever since,” he wrote. “I’m so, so grateful to this gorgeous man for giving me his heart, his shoulder, his strength, his lust, his laughter, his joy.”

“He’s an actor, chef, author, singer, producer, and the most wonderful, selfless parent I’ve ever seen. A sextuple threat, if you will,” Harris joked. “And I most certainly will. Happy 15th Anniversary, @dbelicious. You keep making all my dreams come true.”