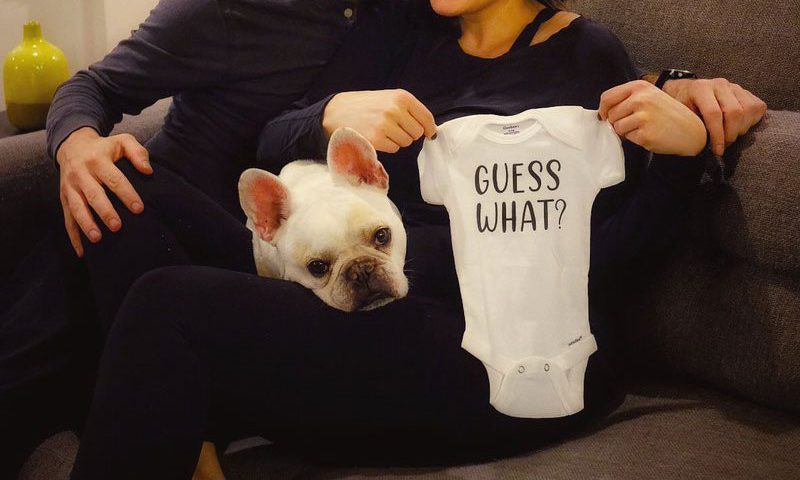 Hallie Jackson had some extra exciting news to break!

“Our next question comes from me in New York City,” Geist playfully said. “I ask, ‘Hallie, do you have some news for us this morning?’ ”

“Little bit,” Jackson replied. “ Frank [Thorp] and I did our family Christmas card a little early this year. Wanna take a little peek?”

Flashing an image of the card up on the screen, the couple can be seen cuddling on the couch while Jackson holds up a baby onesie with the words “Guess what?” written on it.

Never miss a story — sign up for PEOPLE’s free daily newsletter to stay up-to-date on the best of what PEOPLE has to offer, from juicy celebrity news to compelling human interest stories

Asked about how her pregnancy journey has been thus far, Jackson, who revealed that the baby is due in early April, said she experienced “a lot of exhaustion” during her first trimester.

“But we’re halfway there,” she added.

The mom-to-be went on to explain that her decision to wear blue while she broke the big news was just a “decoy.”

“I don’t have a hot pink one,” she added, as she revealed the couple is expecting a baby girl.

Opening up about the happy news, Jackson wrote on Twitter that she felt “overwhelmed with gratitude for all the love and support.”

“Thank you, truly. and a shoutout from Frank and me to @TODAYshow & @WillieGeist for making this morning memorable (and a bonus surprise cameo from @hodakotb!)” she wrote, alongside a slideshow of images — one of which showed Today host Hoda Kotb giving Jackson a hug.

Sharing the happy photo of her and Thorp

holding their baby on the way’s onesie, she described pregnancy as “our best adventure yet.”

In his own social media post, Thorp, a producer and off-air reporter for NBC News, wrote, “Every day is an adventure with @hallie_gram by my side, and I can’t wait to show this little person the world as a family!! Sleepless nights start in April!”

Jackson previously teased her big news on Twitter, as she hinted that a “very special surprise” would be revealed on Sunday’s show.

“Cheers to a hilarious morning filling in on @TODAYshow!” she wrote on Friday. back at it tomorrow with @WillieGeist… and a *very special* surprise see you then…”