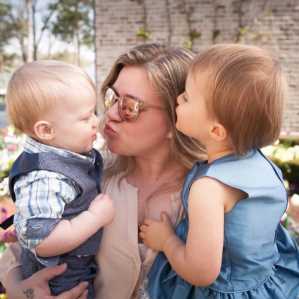 The Voice coach, 36, was honest with her younger kids — daughter River, 4, and son Remington, 3 — about the fact that she and husband Brandon Blackstock, 42, were responsible for their Easter baskets (and not the Easter Bunny!), but it led her to believe that she “may not have done [the holiday] right.”

“Even my nanny came in this morning and was like, ‘What did the Easter Bunny bring?’ And I was like, ‘Wait what?’” Clarkson tells PEOPLE. “I kind of just was like, ‘Mommy and daddy did these for you.’ I knew my mom always did it — maybe don’t show this to children.”

“I thought Easter was for us,” she continues. “Sometimes I’m tired of giving credit to non-existent things. Like I’m very busy, and I took the time to shop at Target and put this all together. I did this — no bunny! They got chocolate, so they’re fine.”

After opening the baskets and doing an egg hunt, Clarkson says she then spent some time in the studio working on her new album.

“I don’t get many days to actually work on my record,” she says. “So yeah, I had to work on Easter. Jesus didn’t mind, he told me.”

Though Clarkson recently wrapped her Meaning of Life Tour, the next few months are going to be busy as she finishes up her album, takes her Voice team into round two of the Live Cross Battles on Tuesday and prepares to host the Billboard Music Awards for the second year in a row on May 1.

“I had so much fun hosting the Billboard Music Awards last year that I’m back for more,” Clarkson said in a statement. “We’re turning it up a notch this year and I can’t wait to celebrate all of my fellow amazing artists for another unforgettable night of live music.”

Additionally, the American Idol alum is set to host her new talk show, The Kelly Clarkson Show, which will premiere on Sept. 9 on NBC.