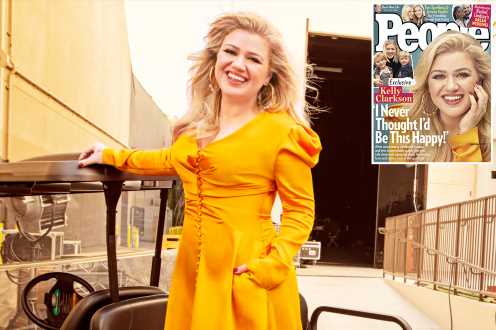 Kelly Clarkson is a lot of things, but she’s no diva.

Sure, she’s a global music superstar on the brink of premiering her own daytime talk show—but if you ask her, “I’m just normal,” she says. “The thing people say most about me is that I don’t act like a celebrity.”

That said, her most important job is being ‘Mom’ to her and husband Brandon Blackstock‘s four young kids. When it comes to making time for them, the easy-going star has no problem putting her foot down.

In this week’s issue Clarkson, 37, gets all dolled up for her PEOPLE shoot and cover story (“This is the most I’ve ever felt like Mariah Carey!” she joked while on her new set at the Universal Studios lot in L.A.). Discussing everything from her tough childhood to her busy life now launching NBC’s syndicated Kelly Clarkson Show, the star opens up about staying true to herself—and putting family first above all.

Watch the full episode of People Cover Story: Kelly Clarkson, streaming now on PeopleTV.com, or download the PeopleTV app on your favorite device.

“I love being busy,” says Clarkson, who’s currently filming for The Voice as well as her show. “The schedule is intense but I actually work really well under pressure.”

But when it came to scheduling in time for her kids—daughter River Rose, 5, and son Remington Alexander, 3, as well as daughter Savannah, 18, and son Seth, 12, from Blackstock’s previous marriage—Clarkson, who’s known for her hilarious mom-life commentary on social media, made that a non-negotiable.

“When we were doing the schedule for the show, I was like, ‘I have to drop my kids off at school.’ And I’m always the one who puts them to bed,” she says. The star’s show doesn’t start taping until her morning school run is done. “You just have to prioritize and juggle and make people know it’s an important thing,” she says. “And don’t feel guilty about it.”

Clarkson—who went from being a struggling cocktail waitress to a star when she won the first season of American Idol back in 2002—is aware of the luxury she has now in making a schedule that works for her family. And she certainly isn’t claiming to have all the answers.

“I’m never going to be that person that tries to play off like I’m some kind of Stepford wife,” she says. “We’re a blended family. We work very hard at that.”

“Some days,” she continues, “I totally hide in a bathroom and I’m crying, going, ‘Oh my God, this is a lot.’ Everybody does. Every parent does, especially when you’re like, ‘Am I screwing up my children? Or nailing it? I have no idea. I’m sure a little of both.'”

After signing on to do the show, Clarkson and her husband moved the whole family from Nashville to Los Angeles earlier this year. “It was a big decision for us,” says Clarkson, who’d initially laughed at the idea of doing her own talk show.

As for what her kids think of Mom’s new gig, “Our 3-year-old doesn’t get it but the 5-year-old, she’s very clever,” says Clarkson. “She’s already asked that I have Chris Martin on to sing ‘Yellow.’ It’s her favorite song.”

The older two are a bit tougher to impress: “Reba McEntire is their grandmother,” says Clarkson of the country icon who used to be married to her husband’s dad, Narvel Blackstock. “She’s already done all the things so they’re like ‘Yeah, of course, cool.’”

Still, Clarkson made sure to soak up quality time with her brood before things kicked into high gear. “We just took our first family vacation,” she says of exploring Colorado with the whole clan in July. Of her kids, she says, “I want to make sure they come first.”

For more on Kelly Clarkson’s journey from American Idol winner to the new face of daytime, pick up this week’s issue of PEOPLE, on newsstands Friday.