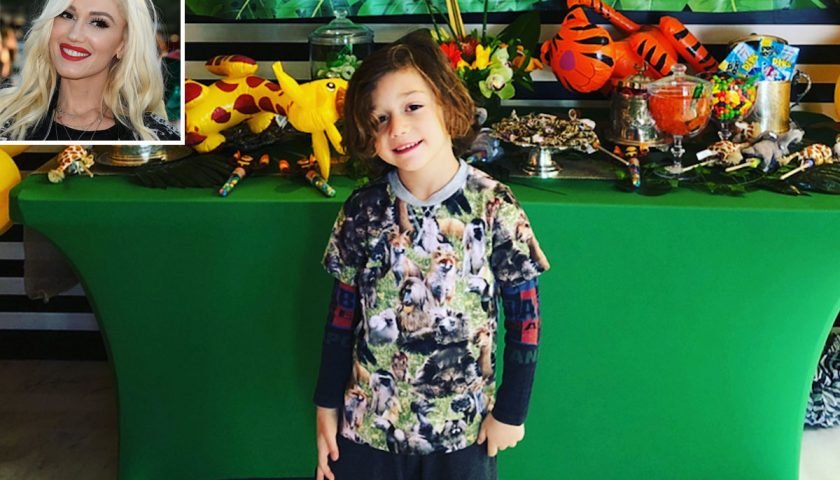 Gwen Stefani and ex-husband Gavin Rossdale‘s youngest child hit his newest age milestone on Thursday, when his mom uploaded a series of snapshots of the little boy at his birthday party to Instagram.

The jungle-themed soirée saw Apollo posing in an animal-patterned T-shirt, wearing a huge smile as he was backed by inflatable tigers and giraffes, leopard- and zebra-print balloons, an oversized cake made to look like a tiger and an on-theme sign that read, “APOLLO TURNS FIVE!”

“Happy 5th b day to my sweet baby apollo u r a true gift to me from GOD,” Stefani, 49, captioned her party gallery, adding the hashtags, “#birthdayboy,” “#miracle,” “#february28th” and “#angelbaby.”

Rossdale, 53, shared his own tribute to the former couple’s youngest son (they also share Zuma Nesta Rock, 10, and Kingston James McGregor, 12, while Rossdale has a 30-year-old daughter, Daisy Lowe).

“Happy birthday to my little man — apollo,” the Bush frontman wrote on Instagram Thursday, posting a snapshot of Apollo with his arms joyfully in the air, wearing a blue ribbon that reads, “Birthday Boy!”

He also shared two photographs of Apollo onstage with his English rocker father on his Instagram Story, where the youngster wore headphones as Rossdale beamed proudly and threw up a peace sign to the crowd.

The animal-powered bash comes one year after Stefani and boyfriend Blake Shelton rang in Apollo’s fourth birthday by dressing up as Daphne — red wig and all! — and Shaggy to the little boy’s Scooby-Doo.

Apollo’s party included face painting, a show by Bob Baker Marionette Theater, a castle-shaped bounce house, tons of sweets like cotton candy (which Kingston was a big fan of) and even a visit from Scooby himself.

The confectionery centerpieces? Multiple cakes themed after the famous animated series, including one purple-frosted version with a haunted house topper and a second topped with a culinary rendering of Scooby’s head.