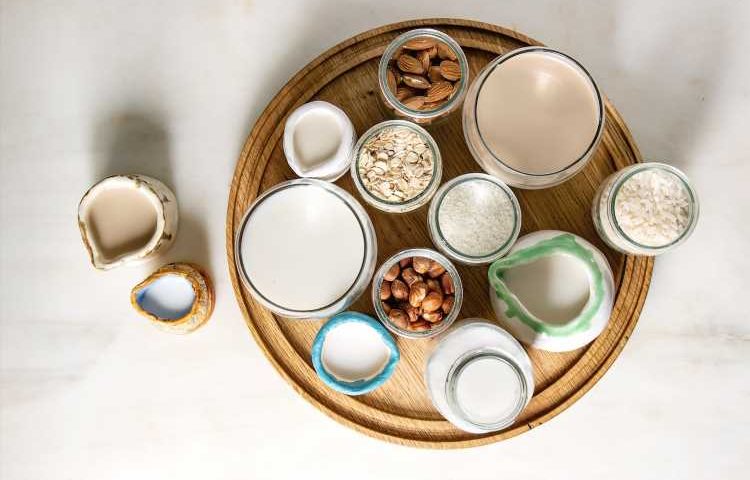 “As they’re mostly made up of water, many plant-based milks have little nutritional value,” says Skye Swaney, an accredited practising dietitian at Shift Nutrition. “Compared to cow’s milk, they contain a lot less of every other nutrient apart from fibre.” Doesn’t stop us loving them, though. So, to help you max your nutrition, we’ve put together an expertbacked milk guide. Pour over this, people.

If cow’s milk gives you tummy pains or wind, losing the lactose can be smart. “Lactose-free milks are simply regular cow’s milk with the addition of lactase, an enzyme that breaks down the sugars [lactose] in milk that some people can’t tolerate,” says Swaney. It has the same – or occasionally a slightly sweeter – taste than regular milk, and you can sub it into any recipe that needs milk because it has the same texture and nutrients. Side note: you can also get lactose free cream, yoghurt and custard.

Dairy is still our most popular drop in this space, according to the Australian Health Survey, but if your mates are giving up moo, should you be too? “It’s a personal choice,” says Swaney. “There are concerns about the impact of cattle and dairy farming on our environment. However, some plant milks come with their own environmental concerns.” Cow’s milk naturally contains calcium, protein, vitamins and minerals, which generally have to be added into plant milks. Bottom line: if you don’t have a genuine milk allergy, there’s no reason to avoid it.

You’re probably already drinking this in your smoothies and straight from the carton. Coco milk is made from filtered water and coconut cream. It’s #vegan, #paleo and #dairyfree, but look beyond the sexy logos and read the ingredients list. Robbie Clark, an accredited practising dietitian at HealthBank, recommends choosing one that’s unsweetened and has minimal preservatives, stabilisers and additives. “Coconut milk does contain more fat than other milk alternatives, but [this includes] medium-chain triglycerides (MCT), a type of saturated fat that may benefit weight loss, satiety, body composition and metabolism,” he says.

This low-kilojoule choice is close to taking soy’s crown as the most popular plant milk, according to IBISWorld. It’s made from almonds so it must be good for you, right? Um, not always. “Most almond milks only contain around three per cent almonds, and many feature additives such as sugar, flavouring and thickeners,” says Swaney. Look for one that has as few ingredients as possible. It’s pretty low in calcium, too, so be mindful, especially if you’re pregnant when your recommended intake of the bone-boosting mineral is higher. Also take note, planet lovers: it takes five litres of water to grow one almond (that’s a lot).

There was a time when soy was considered the only alt milk for your AM latte. “Studies show that after cow’s milk, soy milk is nutritionally the best choice,” says Clark. “In Australia, most soy milks are also fortified with calcium and vitamin D.” There have been concerns around reports linking soy to hormone and fertility issues, but the science is very mixed, with research also highlighting its health benefits. Swaney reckons it’s totally fine to include soy milk in your diet in moderate amounts, while pros at the Harvard T.H. Chan School of Public Health say enjoying soy several times a week is all good. As with other plant milks, be mindful of the sugar content. Clark also recommends including other calcium-rich foods in your diet, such as raw seeds, tahini, sardines, tinned salmon, legumes, dark green leafy veg, tofu and edamame.

This gets a tick for tasting like your porridge bowl and creating less of a carbon footprint than some other plant-based milks. Nutrition wise, it packs less protein than dairy and soy, but more than other plant milks. “It also tends to be enriched with the nutrients found in oats such as B vitamins, folate, calcium and beta-glucans, which is a type of fibre that can help to lower cholesterol,” says Swaney. Plus, because oats absorb water more easily than nuts, more oats end up in the final milk product, giving it a creamier consistency without the need for added thickeners. Use it for anything you’d normally use cow’s milk for.