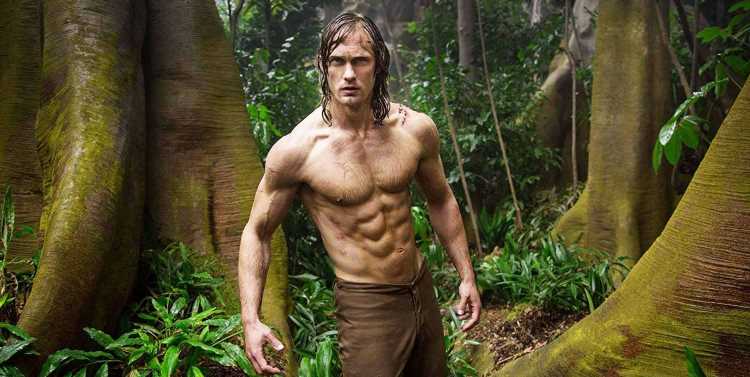 Before the cascade of crappy live-action Disney remakes, there was The Legend of Tarzan, a non-Disney remake that roared into theaters with movie stars like Alexander Skarsgård, Samuel L. Jackson, and Margot Robbie. And though it didn’t quite leave opening weekend with a whimper, Tarzan did fail to secure a sequel. (In another universe, Disney may have taken the reception as a portent.) While you may not have seen the film, if you remember anything from the summer of Tarzan, it was probably Skarsgård’s perfectly sculpted chest glowing from busses and billboards—because Warner Bros. knew the best way to pitch the story was pecs.

So how did Skarsgård sell a six-packed, swinging jungle man? He went out and actually built himself a six pack.

Skarsgård had help from trainer, nutritionist, and fellow Swede, Magnus Lygdback. Lygdback met us at a studio in Santa Monica to walk us through Skarsgård’s “extreme diet.”

“It’s not for everyone,” he warned, almost immediately. With short preparation windows, actors often times must cover a lot of ground quickly. That means eating a lot and fast. “When building a superhero, there’s really three cycles,” says Lygdback. The first is the build up, or “bulking phase.” Then there’s the cutting cycle, where actors get shredded. And finally the maintenance period, where the actor must keep his muscle mass throughout filming. Skarsgård was already large, and so Lygdback focussed on cutting.

He based Skarsgård’s second and third phase diet around seafood with “slow carbs” twice a day. That’s brown rice, quinoa, barley, faro, and cold potato. Alongside seafood, Skarsgård was consuming “good fats” like avocados and unsalted nuts. “The reason for eating less salt when cutting is that salt binds water, and you’re trying to get rid of that water retention.”

“It’s really important that you can enjoy your food. What’s the point of eating broccoli and chicken breast and white rice seven days a week?”

Since Skarsgård was 200 pounds during the cutting, Lygdback had him consuming 135g of protein, 70g of fat, and 200g of carbs—every day. Skarsgård would wake up and take a shot of ginger, cayenne, and lemon. After a 30-minute HIIT cardio session, he would sit down to a breakfast of 4 eggs, spinach, and vegetables. Three hours later, Skarsgård ate his first snack—shrimp or a similar seafood. Three hours later was lunch: lots of veggies, sweet potato, and salmon. Three hours after that, snack number two: sashimi or lobster. (Remember, the diet’s not for everyone … or everyone’s wallet.) Second snack was then followed by a 45-60 minutes of heavy weight lifting. Then dinner: more slow carbs and protein.

“For me and my clients, it’s really important that you can enjoy your food,” said Lygdback. “What’s the point of eating broccoli and chicken breast and white rice seven days a week?”

Well, if eating lobster helps us look like Tarzan, how can we disagree?