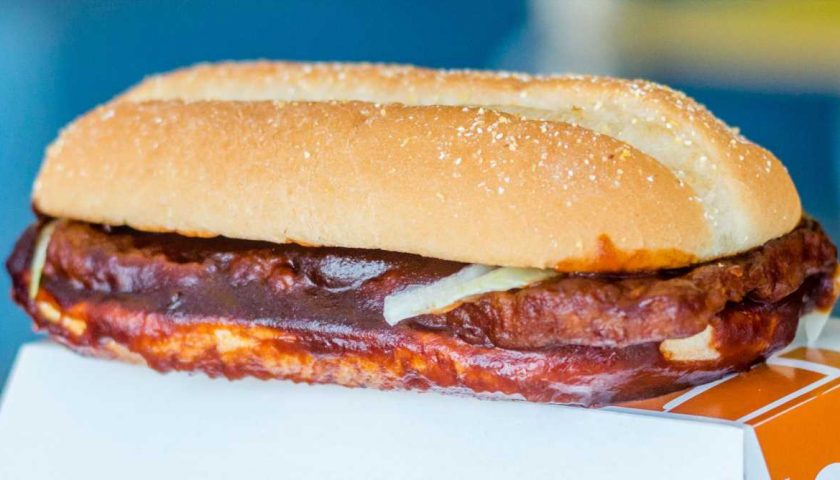 Attention, McDonald’s fans: the McRib is back. The cult-favorite sandwich will be available at 10,000 restaurants nationwide starting Oct. 7, according to Fox News.

Every year, McDonald’s releases the sandwich for a limited time, usually four to six weeks, the outlet reports. Last year, the McRib resurfaced in November.

In the past, super fans have done things like pleaded with their city councils to bring the sandwich back, driven 10 hours to get the sandwich, and eaten 12 McRibs at once. There’s also a McRib Locator that will point you to the nearest McDonald’s location that’s selling the sandwich. The McRib first appeared on the menu in 1981.

If you’ve never had a McRib before, or have been gleefully eating the sandwich without knowing exactly what’s in it, here’s what you need to know about the McRib’s nutritional info.

What’s a McRib made out of?

The McRib features a pork patty on a homestyle roll, and its topped with barbecue sauce, pickles, and onions. You can see the full ingredient breakdown here:

As for nutritional info, the McRib clocks in with 480 calories, 2o0 of them from fat. You’ll get 24 grams of protein from the sandwich, and 45 grams of carbs. The McRib also has 890 mg of sodium, 80 mg of cholesterol, and no trans fat.

When it comes to calories, the McRib is pretty on par with other McDonald’s menu items, like the Big Mac’s 540 calories and the Filet-o-Fish’s 390 calories. With 45 grams of carbohydrates, the McRib isn’t going to jive with your keto diet — but overall, it’s certainly not among the worst fast food meals you could eat.

If you really want a healthy meal the next time you hit up a chain restaurant, check out our guide to the healthiest fast food options in America.