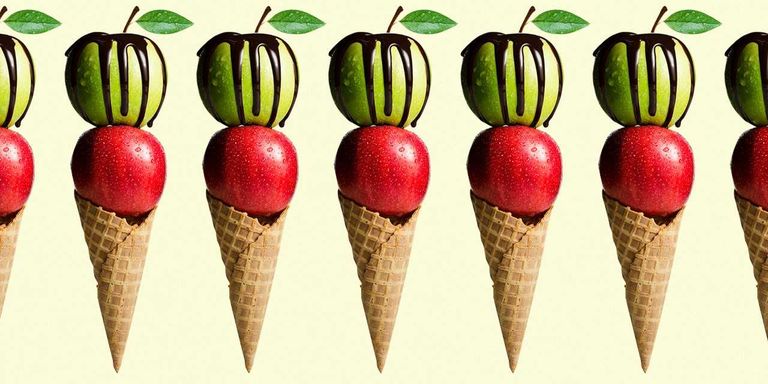 There are endless memes on Insta right now hyping balance. You know, like going to the gym and stopping for a burger on the way home. Or sipping green juice while you take the elevator.

Do what makes you happy! ✨

Do what makes you happy! ✨

Funny and relatable? Def. But it’s pretty sound diet advice too, at least according to one registered dietician who says you can have your cake—as long as you eat something healthier on the side too.

Alyssa Cohen, R.D., a nutritionist based in New York City, and founder of the blog Fuel My Fit, says that her number-one rule when it comes to weight loss is to focus on balance. Specifically: Every time you want to eat something truly indulgent, pair it with something you know is good for you, says Cohen.

Let’s say your fave food is pizza. You don’t have to swear off it forever (the horror). Instead, stick to one or two slices, topped with extra veggies, and paired with a salad, rather than an order of breadsticks.

“I would look at someone like they had five heads if they said I could never eat ice cream again.”

The key here is to never restrict yourself to the point of making some foods totally off-limits. “When something becomes off-limits, we want it more,” says Cohen. Then, when you finally reward your “good behavior”, you risk overdoing it (like eating an entire sleeve of Oreos instead of treating yourself to two or three).

“It’s important to take a step back and realize that food is there as an option,” says Cohen. Sometimes giving yourself the permission to have something if and when you want it can help squash the more urgent, need-it-now cravings that can come with overly restrictive diets—which can lead to disordered eating patterns and yo-yo dieting.

The whole idea of “cheat days” don’t sit well with Cohen either: “I’m personally not the biggest fan of restricting and then going overboard on a cheat day. I think every day that you want to allow yourself a treat, you can,” she says. If you’re treating yourself on the regular, you won’t need special days devoted to treats.

Of course, she admits that some treats are better than others. “I try to make sure all food (including treats) is as minimally processed as possible. For me, I might do an ounce of dark chocolate paired with peanut butter,” she says.

Though, TBH, she does have a soft spot for some more processed foods: “I would look at someone like they had five heads if they said I could never have ice cream again,” she says.

It’s important to recognize that snacks and treats aren’t supposed to be your main sources of calories or fuel, says Cohen. “That ice cream isn’t there to fill me up, it’s there to add on to my meal,” she says.

So basically, “if you want a cookie, have a cookie,” says Cohen—but pair it with a few apple slices or berries; that way, you’re having something you want with something you know is good for you. Because, at the end of the day, it’s more about the big picture of your diet overall than a few treats here and there; because, you know, #balance.