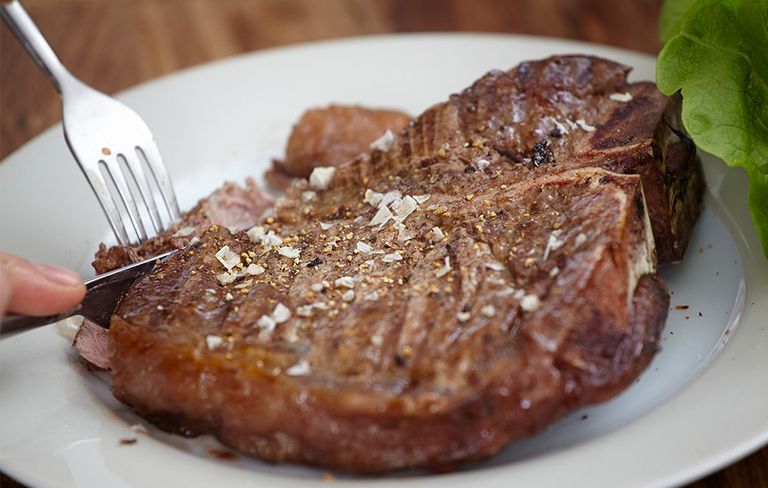 You’ve probably heard of the ketogenic diet, or the low-carb, high-fat diet that’s trending among athletes and average folk alike. On the surface, it sounds awesome: who doesn’t love the idea of eating more steak and bacon? But there are a bunch of keto diet side effects that you probably don’t know about. Here’s a breakdown of what actually happens to your body when you go keto — and how you can avoid these gnarly results.

To understand how the ketogenic diet works, you have to understand ketosis, the process by which your body uses fat for fuel when it’s starved of its usual energy source.

Typically, your body is fueled by glucose in the form of carbs, which can be found in flour, grains, vegetables, legumes, dairy products, and fruits. We usually introduce a steady stream of glucose into our bodies with each meal or snack, explains Pamela Nisevich Bede MS, RD, CSSD, LD.

“When a carb is available, the body will naturally turn to this to make energy instead of dietary fat or stored body fat,” explains Bede.

But when you remove carbs from your diet, your body turns to fat as an energy source instead. In this process, fat travels to the liver and is used to make ketones, an acid. These are released into the bloodstream, which your body converts into energy. The idea is that burning fat instead of glucose will lead to rapid weight loss. But when you’re switching gears and entering a ketogenic state, your body changes in other incredible ways as well.

What are the side effects of ketosis?

“With the lower insulin levels, it’s believed that the fatty acids are more readily released from the body’s fat tissue, freeing them up to be used for fuel,” he explains.

2) You’re less hungry during the day.

Protein is incredibly filling, and because you’re increasing your protein consumption on the keto diet, you’re bound to feel more satiated during the day. But beyond that, the ketogenic diet can also play a role in suppressing appetite, says Hertzler.

The elevated production of ketones is thought to suppress the appetite centers in the brain, he says.

3) You can start feeling sick.

Keto can have a few unfortunate side effects, one of which is known as the “Keto Flu.” Symptoms typically pop up in the first few days as your body gets accustomed to eating fewer carbs. Common complaints include headaches, nausea, fogginess, muscle cramping, and fatigue.

You can expect these symptoms to last about a week, but there are ways to ease the pain. Staying hydrated and getting enough sleep will help with fatigue and muscle cramps.

Be warned — you might need to carry breath mints. “Some people may or may not have a change in breath odor on the ketogenic diet,” says Hertzler. Why? “One of the ketone bodies that is produced in liver is acetone – and it carries an odor,” Hertzler explains. That said, many people who are in nutritional ketosis won’t experience a significant change in breath odor, so it’s not a guaranteed side effect.

If you’re not mindful of getting enough fiber and other nutrients, you might experience some digestive discomfort during the keto diet. “Keto dieters often cite constipation as a common experience, which is due to lower fiber intake,” Hertzler says. Try adding a low-carb fiber supplement to ease symptoms, he suggests.

While you’re adapting to the diet, you might feel a bit fatigued, but once your body has adapted, you’ll have no issues cranking through a strength session, Bede says. You may want to avoid a ton of exercise in the beginning if you’re feeling especially achy and weak.

But as your body settles into ketosis, your performance might be enhanced. “Many athletes find that intense workouts equal better ketosis, and their improved body composition is totally worth those few brutal weeks,” she explains.

Is the keto diet worth it?

These symptoms don’t affect everyone, so if you’re interested in trying the keto diet, give it a shot and see how you feel. But if you choose to say goodbye to keto, be sure not to jump back into a bowl of pesto penne right away.

“When going back to a ‘normal diet,’ carbs should increase slowly—no going back to old habits overnight, or else weight gain is likely to occur and you’re likely to feel terrible, with the influx of sugar that you are no longer accustomed to,” says Bede.