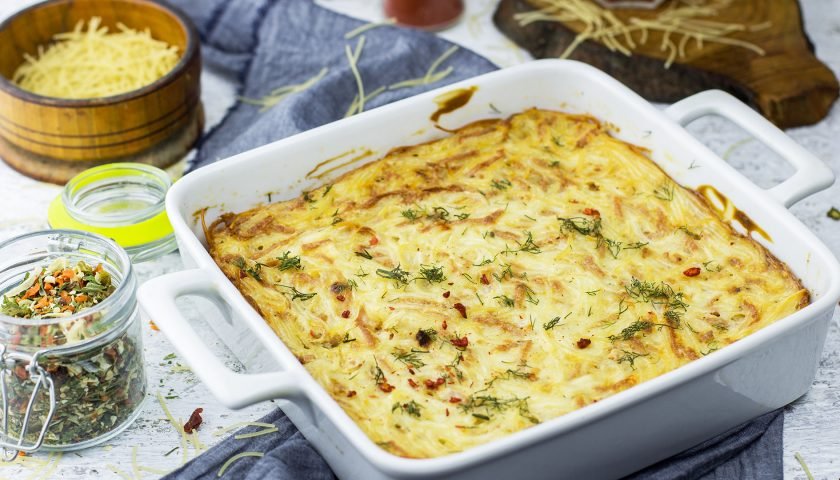 Casseroles — or as some of you may call them, hot dishes — are the heartbeat of the American weeknight meal, the powerhouse of the holiday potluck. If you’re like us, the very word conjures visions of grandma pulling out her red-and-white-checked cookbook and dumping meats, veggies, cheese and the ubiquitous can of soup into a single dish, popping it into the oven and serving it up piping hot in around half an hour.

Don’t get me wrong, there’s a certain nostalgic appeal to a meal made from canned ingredients, but these days we’re a little more into not-so-semi-homemade cooking and we’re on the hunt for a way to elevate the humble casserole into a modern culinary delight we can be proud to add to the potluck spread.

The common denominator in the old-fashioned, not-very-gourmet casseroles is canned soup. You know the kind we mean. They usually start with “cream of” and taste about as fun as we’d imagine binge-watching a season of The Apprentice would be.

From modern soup-free delights to revamped versions of your favorite canned soup standards, these contemporary casserole recipes will delight your family on any given weeknight — with no canned soup in sight. 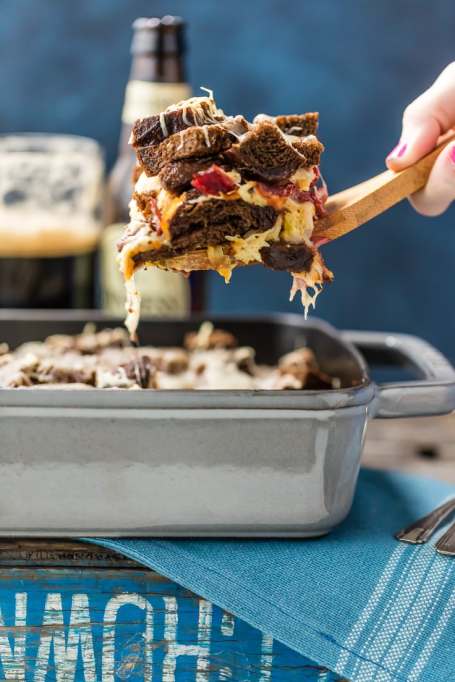 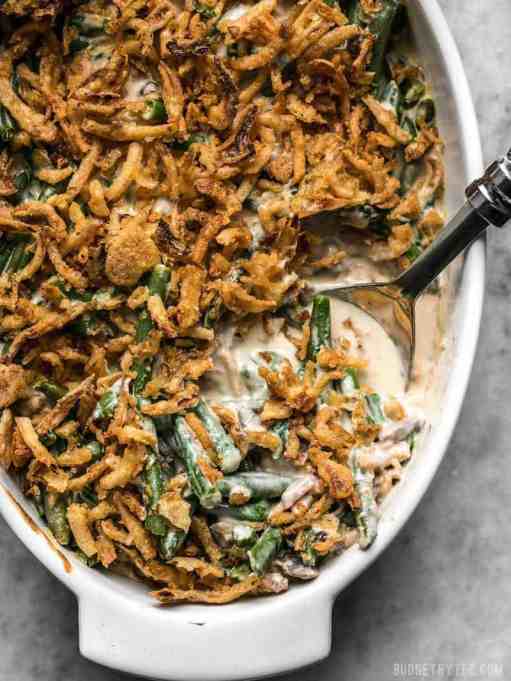 A homemade mushroom béchamel replaces the condensed version, but no one will miss it thanks to the addition of real garlic and flavorful vegetable broth. Make this green bean casserole with homemade or low-sodium veggie stock, and you won’t feel the least bit guilty about the handful of flavorful fried onions it’s topped with. 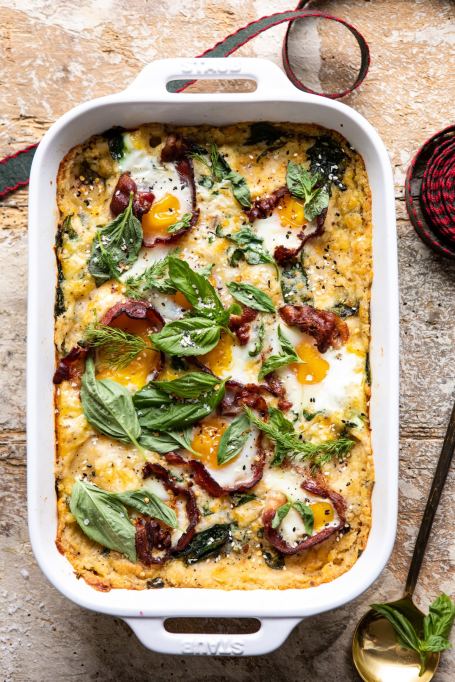 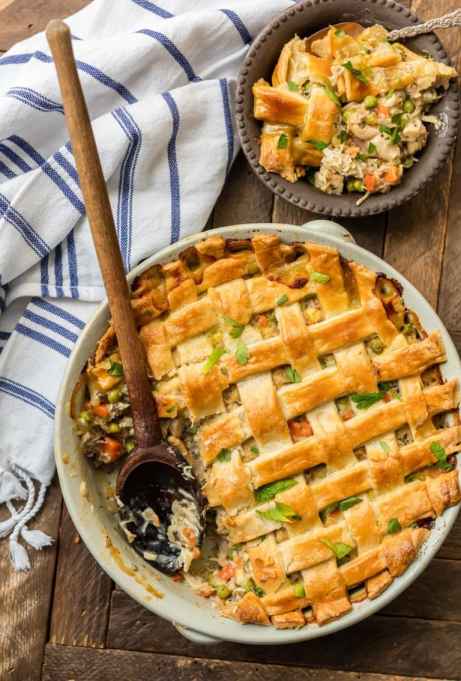 The casserole version of this American classic is a family meal staple. For this canned soup-free version, pick up some juicy rotisserie chicken and a flaky freezer piecrust. Dress it up with the traditional potpie veggies and aromatics and pull it all together with a luscious white wine cream sauce for a Sunday night dinner you can be proud to serve. 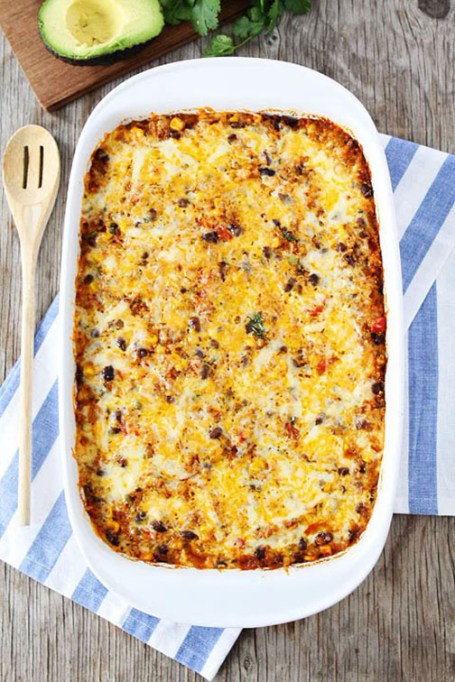 Black beans, quinoa, sweet corn and peppers are seasoned with your favorite Mexican spices, tossed in enchilada sauce and topped with Mexican cheese, green onions, avocado slices and more. Customize this black bean enchilada bake to your family’s tastes by swapping pinto or chili beans for the black beans, using cilantro-lime rice in place of the quinoa or adding sliced grilled chicken or seasoned ground beef. 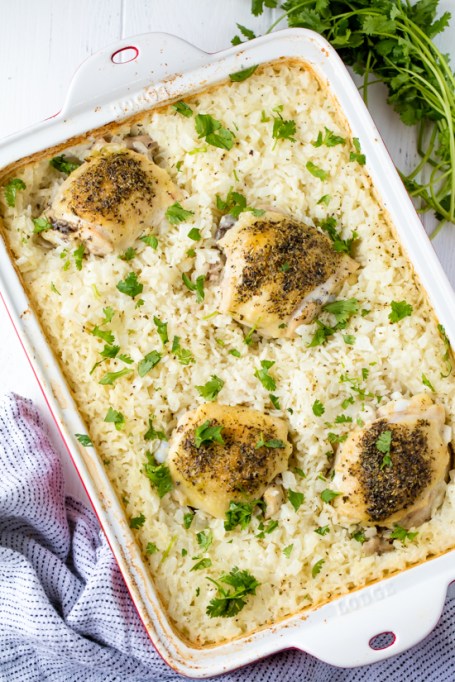 When we were kids, cream of mushroom soup and water mixed with rice made the creamy poor-man’s risotto bed for succulent chicken. This can-less recipe using ingredients you probably have in your kitchen stays true to the original for a chicken and rice casserole that tastes like nostalgia — sans the condensed soup. 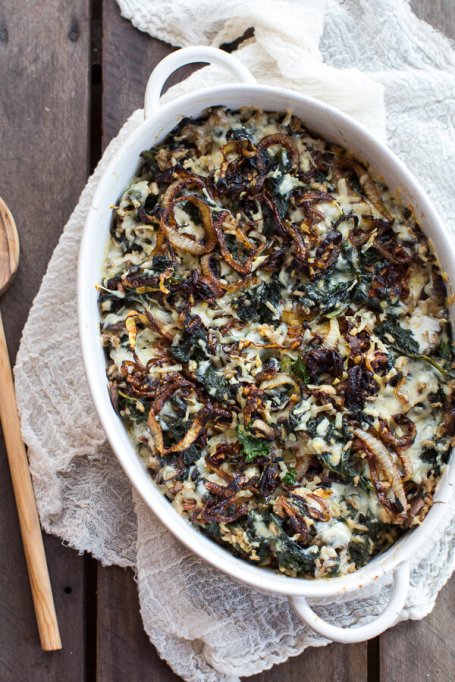 Savory cremini mushrooms and wild rice offset the bitterness of kale in this superfood-packed casserole seasoned with garlic, thyme and nutmeg and sprinkled with nutty Gruyère and onions. 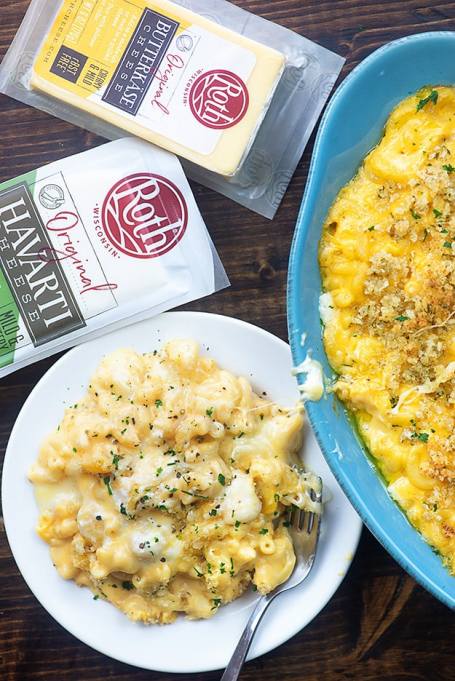 You’ll win the next potluck with this mac and cheese casserole comprised of buttery Butterkäse cheese, Swiss-like Havarti and Prairie Sunset cheese (a flavorful cross between cheddar and gouda), all topped with a crispy, garlic-infused panko breadcrumb crust. 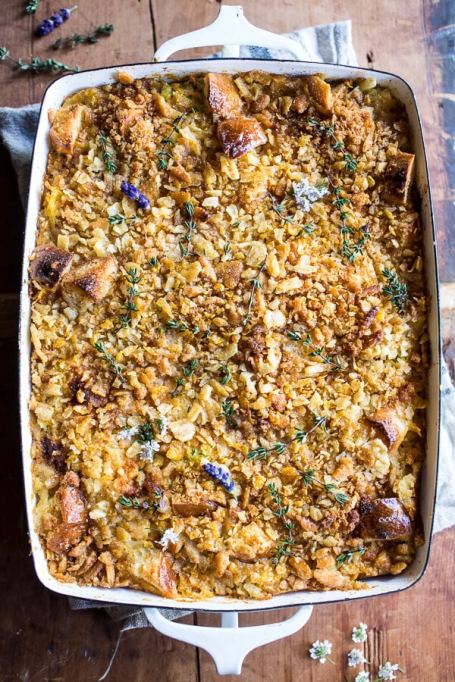 The humble chicken noodle casserole gets a healthy (and soup-free) makeover in this hot dish featuring zucchini noodles, whole-grain bread and traditional American herbs and spices thickened with Greek yogurt. Swap the chicken for an 11-ounce packet of chunk light tuna in water if tuna-noodle is more your speed. 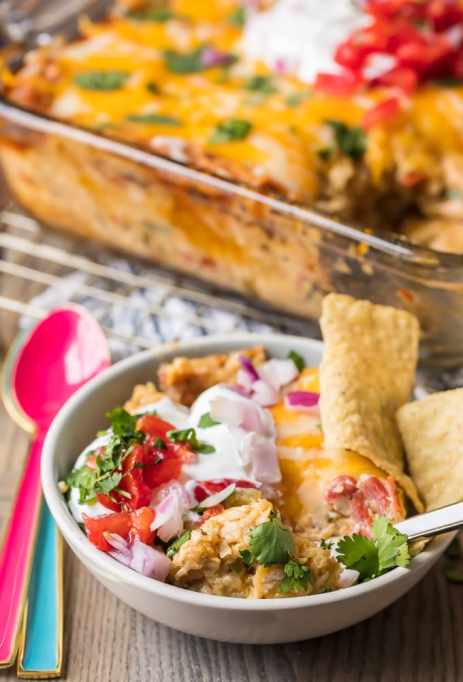 Not only is there no canned soup in this reimagined classic, there’s no processed cheese, either. This king ranch chicken casserole brings classic Ameri-Mex flavors — including green chillies, jalapeños, bell peppers and diced tomatoes — to the table in under an hour. 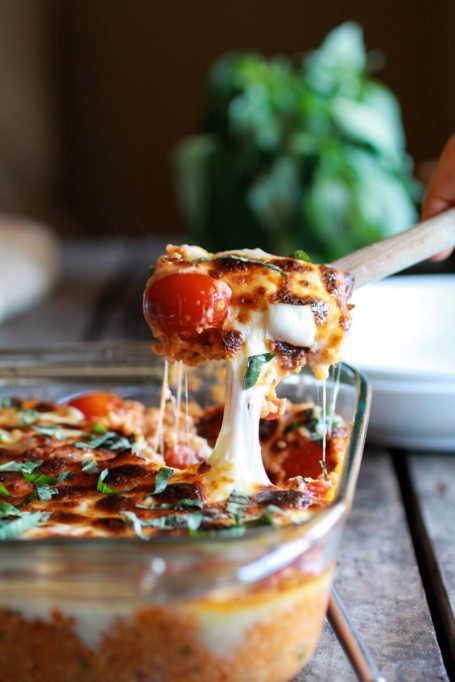 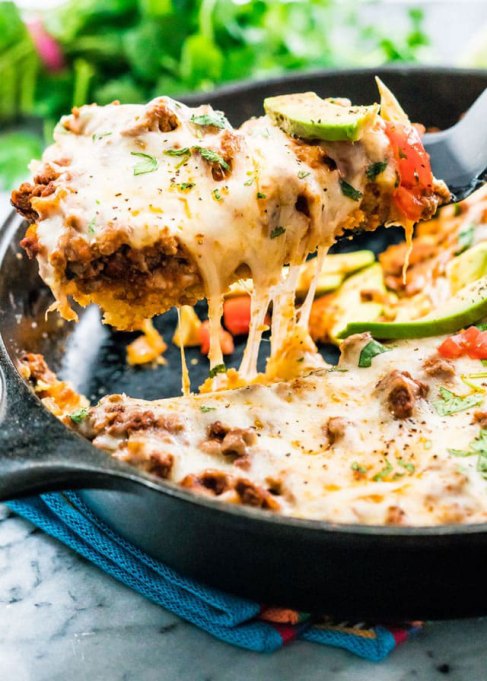 Everyone loves tamales, but let’s be real. It’s a daylong process. This casserole combines the tender masa and spiced meat you crave in a recipe that takes only an hour. We recommend skipping the canned “enchilada sauce” (which is in quotes because nothing that could be defined as “enchilada sauce” comes in a can) and opting for your own; if you can’t DIY on that one, at least make up a pack of McCormick’s (#NotAnAd), which at least tastes as good as homemade enchilada sauce. You can even ditch the canned cream corn in favor of your own recipe. 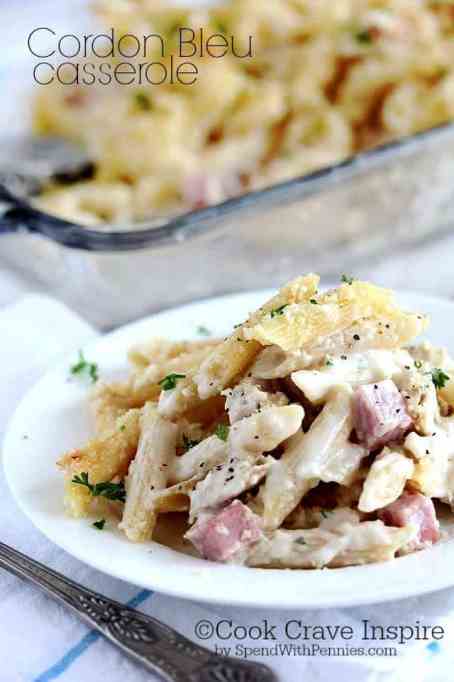 Jazz up boring weeknight quick meals with this Swiss classic (yes, Swiss, not French — we were shocked too). Penne pasta acts as a canal for a creamy sauce juxtaposed against cured ham and juicy chicken, all held together with gooey cheese in a chicken cordon bleu casserole the kiddos will love. 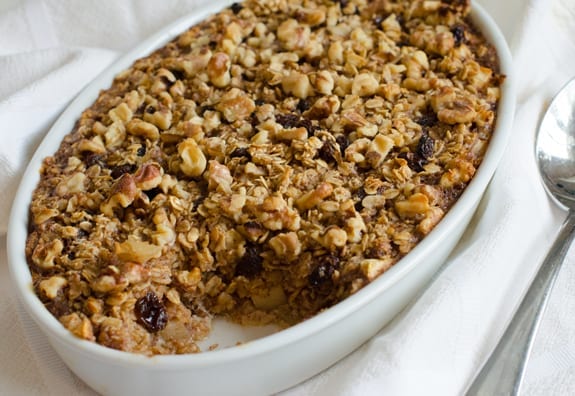 This Amish breakfast casserole combines hearty heart-healthy oatmeal with tart baking apples (such as Granny Smith or honey crisp) and raisins. Walnuts join the party for texture, and the whole thing is sweetened with brown sugar and vanilla extract and spiced with cinnamon. But the real charm of this recipe is its versatility. You can use any combination of fresh or dried fruit and nuts you like. Substitute sweet summer peaches and almonds and serve it with a hint of heavy cream; omit the cinnamon and try sweet-tart strawberries and pistachios with dried cranberries; or use seasonal berries and chia seeds. 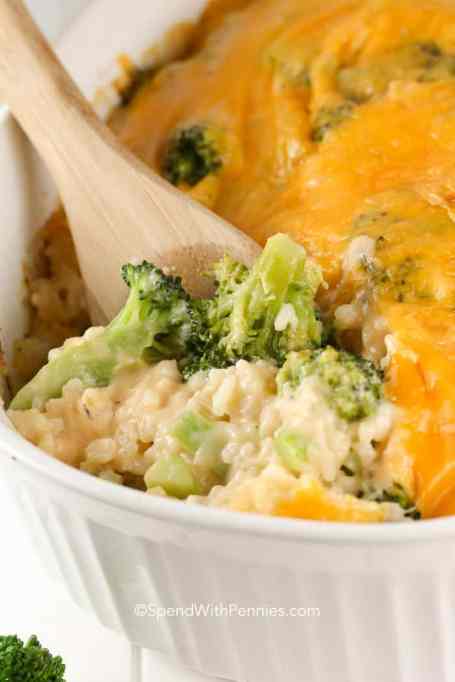 Sneak a little broccoli into your kids’ diet with a creamy, cheesy rice casserole they can’t resist. Cut back on the fat by using 2 percent cheddar and low-fat cream cheese and use a seasoned breadcrumb topping in lieu of the extra cheese on top. Using parboiled rice instead of white rice will up the nutrition factor without changing the flavor. The school lunch-friendly leftovers can be reheated the next day and packed in a thermos with some sliced grilled chicken or lean beef and a side of sliced apples or mandarin oranges. 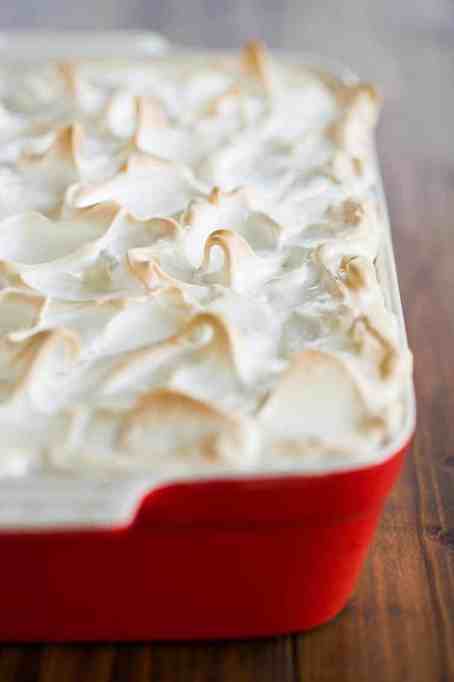 While canned soup’s never been an issue in this Southern backyard barbecue staple, over the years, many a home cook has been seduced by the siren song of instant pudding powders and spray can whipped cream. Go back to basics with this recipe featuring real homemade pudding (we swear it only takes around 20 minutes to cook) and give it a modern twist with a baked meringue topping. 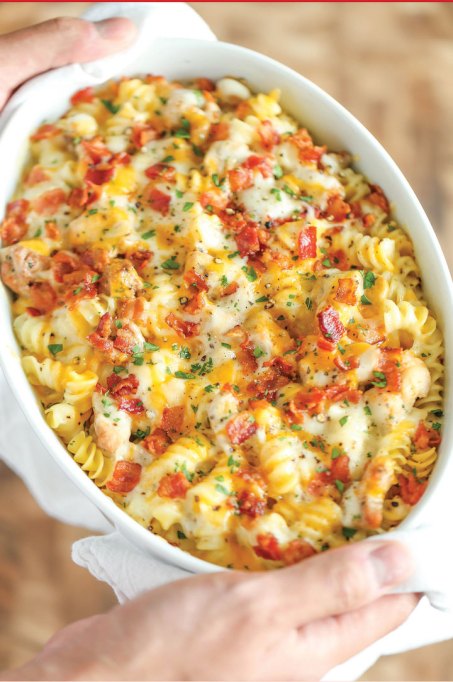 While ranch dressing was first invented by a Nebraska dude rancher in the 1950s (true story), it didn’t make the nationwide splash to become the ubiquitous American dressing and everything-dip until the ’80s, making all things ranch-flavored relatively modern by comparison, yet it still didn’t escape the cream-of clutches of big soup. In this only-in-America spin on chicken Alfredo, zesty, herb-infused ranch is joined by salt-cured BFF and soul mate bacon for a cheesy pasta bake that’s anything but boring. 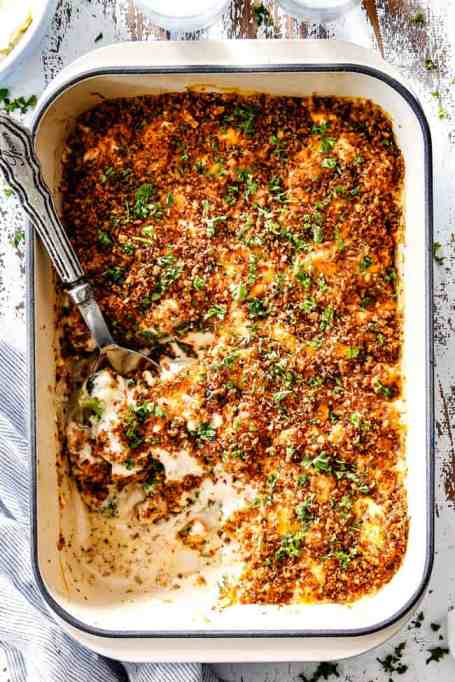 American classic chicken Divan didn’t start life as a potato chip-topped canned soup recipe — then the 1950s happened. To “modernize” this casserole, go vintage with a creamy cheddar mornay sauce (though a more traditional Gruyère would be delish as well) layered over steamed broccoli and juicy chunks of chicken, and top the whole thing off with an extra-crispy panko crust. 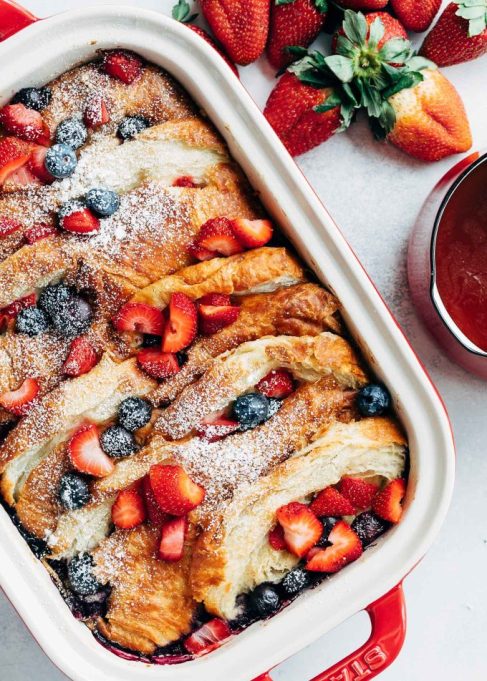 Make this French toast casserole up the night before by arranging croissant halves soaked with a sweet and eggy cinnamon-nutmeg-spiced milk in a casserole dish, tucking in a mix of sweet-tart berries and refrigerating it overnight, then bake it the next morning until billowy and brown. Serve it up dusted with powdered sugar and a drizzle of rum-maple syrup. 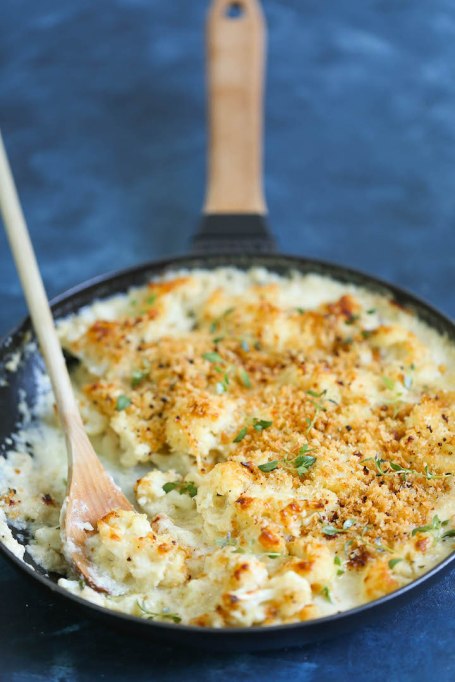 Cauliflower is the new potato, and this creamed cauliflower gratin pairs it with a garlicky Parmesan cream sauce and chopped fresh thyme for a modern baked side that’s just as at home on Wednesday’s family dinner table as your holiday spread.