A British woman whose wife booked her a pap smear when she was too “embarrassed” to do so herself is crediting her partner for saving her life after the test revealed the presence of precancerous cells.

Louise Cawley, 35, recently underwent a pap smear for the first time in six years. She told SWNS, a British news agency, that the last time a doctor observed that part of her body was when she gave birth to her third child, daughter Eliza. She called the birthing experience “traumatic” — her daughter was born by C-section after Cawley suffered a uterine rupture —  and said it was for that reason she put off going to the doctor for a routine check.

"I think over the years it was [the] embarrassment that was putting me off booking the smear test,” she told SWNS. "The last time a doctor had been down there it was when I was pregnant with Eliza and it [all went] terribly wrong and we both nearly died so I really just didn’t want to go through it.”

She added: "I guess I was sweeping it under the carpet and ignoring the issue, which was stupid of me and I’ll never do that again.” 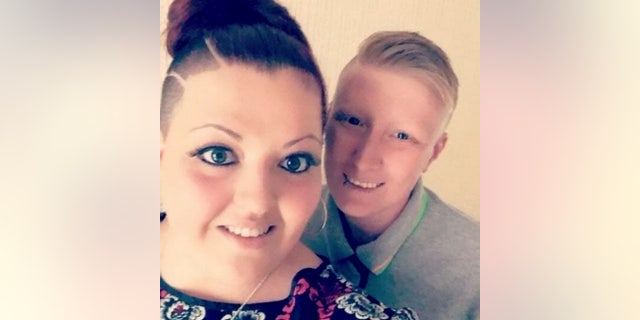 "Kelly kept reminding me and pestering me to book it, but I just really didn't want to and put it off so much that she ended up booking the appointment for me,” she said. "The bonus was that she was coming with me and having hers done at the same time, so at least I wouldn't have to go alone.”

In February of last year, the two went to the hospital for their respective appointments. A few weeks later, Cawley received the results of the test that would shock her: the presence of abnormal cells. She later went in for a biopsy which revealed the cells were CIN3, what the National Cancer Institute defines as “severely abnormal cells found on the surface of the cervix.” These cells, typically caused by the human papillomavirus (HPV), can become cancerous if left untreated. 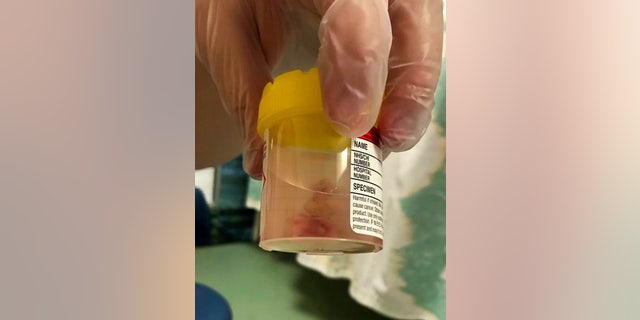 The abnormal cells taken from her cervix.
(SWNS)

"It was like my life went into pause mode, I couldn't focus on anything and I was just Googling like mad, reading all the worst outcomes, it was terrifying," she said of the test results. "Kelly's results came back fine, and that was a total relief, I can't imagine what it would have been like if she had bad results too, I was just so glad she was OK even if I wasn't.”

The abnormal cells were removed via LLETZ treatment, or when a thin wire loop is heated by an electrical current. The patient is awake during the procedure and received a local anesthetic to numb any pain.

"Second time around, I got there on the bed, things were going well but I was petrified beyond words, then my whole body started uncontrollably shaking, I couldn’t help it, I was so scared of the unknown,” said Cawley.

The mom of three, who went in for another checkup in October to ensure she was clear, vows that she will “never take this risk again” and noted her “amazing wife” saved her life.

THE FLU HAS SICKENED THIS STATE THE MOST, REPORT FINDS

"If Kelly hadn't booked me in for the smear test, I would have left it longer to get checked and by that point, the doctors have said it is likely I would have had cervical cancer,” she said. "To think I came that close to losing everything over the embarrassment of a short two-minute smear test, it's just terrifying.”

"I'll never make that mistake again, and when it comes to arranging my next smear test in 2022, I won't put off booking it again."