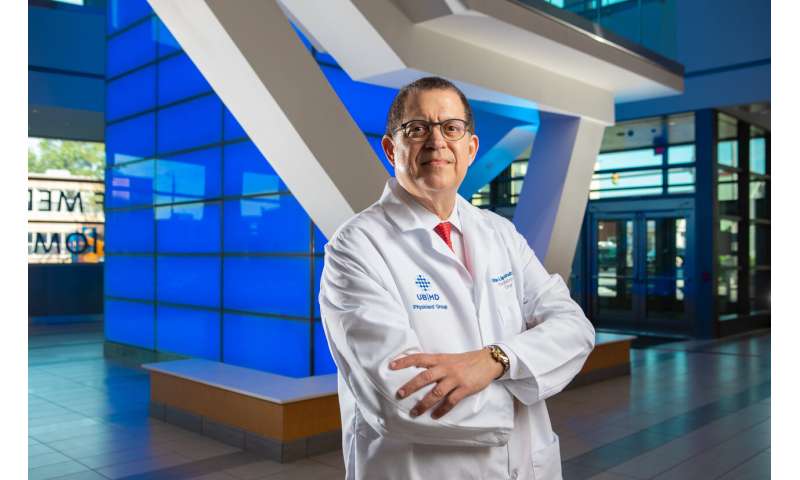 New research published Nov. 14 in the journal AIDS reveals that these uninfected babies who are exposed to HIV and antiretroviral therapy in utero exhibit “subclinical but significant” left ventricle dysfunction early in life, suggesting that the drugs may put these babies at risk of adverse cardiac events.

Steven E. Lipshultz, MD, A. Conger Goodyear Professor and Chair of Pediatrics in the Jacobs School of Medicine and Biomedical Sciences at the University at Buffalo, is lead author on the paper. He is also pediatric chief-of-service at Kaleida Health, medical director of pediatric services business development at John R. Oishei Children’s Hospital and president of UBMD Pediatrics.

Based on their findings, the researchers are recommending follow-up with serial echocardiograms in this population to further assess “the potential cardiac toxicity” of in utero exposure to antiretroviral therapy.

The findings are part of the multiyear National Heart, Lung, and Blood Institute-funded Cardiovascular Status of Highly Active Antiretroviral Therapy in HIV-exposed Infants and Children (CHAART) study, of which Lipshultz is the principal investigator.

Antiretroviral drugs weren’t always administered to all pregnant women with HIV. That changed in 1994, when a major study showed that when HIV-infected pregnant women took a single dose of the antiretroviral therapy Zidovudine (commonly known as AZT), the incidence of HIV infection in their babies declined from 27% to 7%.

“At that point, it became U.S. government policy to recommend that all HIV-infected pregnant women take antiretroviral therapy during pregnancy,” Lipshultz explained. “That was a major advance, which resulted in more than a million children around the world born without HIV infection who otherwise would have been.

These powerful therapies block retroviral replication, which is why they are useful in blocking HIV transmission. “But their effects on the cells of the body weren’t known when we started this study,” he said. “We were concerned that they may also block growth of the heart in fetuses and children, as well as increase apoptosis and inflammation, resulting in smaller, unhealthy hearts in treated fetuses as they grow and mature.”

Previous research, including studies led by Lipshultz, has demonstrated that infants exposed to antiretroviral therapy either in utero or just after birth exhibit a number of heart muscle abnormalities, especially related to the left ventricle.

One 2017 study headed by Lipshultz in the Journal of the American College of Cardiology found that infants exposed to HIV but were uninfected, and who were exposed to antiretroviral therapy, have hearts that are too small for their body size, so they are unable to properly meet their circulatory needs.

“That finding was concerning because it suggested that these antiretrovirally-exposed but uninfected children may be at risk as they get older of developing heart failure from diastolic heart dysfunction of the main pumping chamber of the heart, the left ventricle,” said Lipshultz.

From small hearts to diastolic dysfunction

Those findings helped establish the hypothesis for the current study, which was that in utero exposure to antiretroviral therapy adversely affects left ventricle diastolic function.

The current study prospectively enrolled and studied two groups of HIV uninfected children from birth to four years old: 148 HIV-negative children who were exposed to these drugs in utero, and a group of 130 healthy controls. Each participant was assessed for 37 independent echocardiographic parameters at the age of six months, and then yearly until age 4.

The researchers found that there were differences in echocardiographic left ventricle diastolic indices in HIV-exposed uninfected children at all ages who were exposed to antiretroviral therapy in utero compared to normal controls. These differences indicated reduced cardiac efficiency.

Lipshultz reiterated the value of antiretroviral drugs in significantly reducing the number of HIV-infected infants born to mothers with HIV.

But he cautioned, because of the echocardiographic differences, the researchers conclude: “The long-term consequence of such impairment in left ventricle diastolic function early in life is yet to be determined.”

Therefore, they recommend that these children undergo long-term follow-up with regular echocardiograms in order to assess the clinical relevance of these abnormal findings.