A health worker whose periods were so sore she needed morphine has been put on a course of injections that trigger a temporary menopause – at just 29.

Jade Spargo, from Truro, Cornwall, has suffered with excruciating pains every month since the age of 16.

She has adenomyosis and endometriosis – two conditions which cause heavy bleeding and agonising cramps whenever she menstruates. 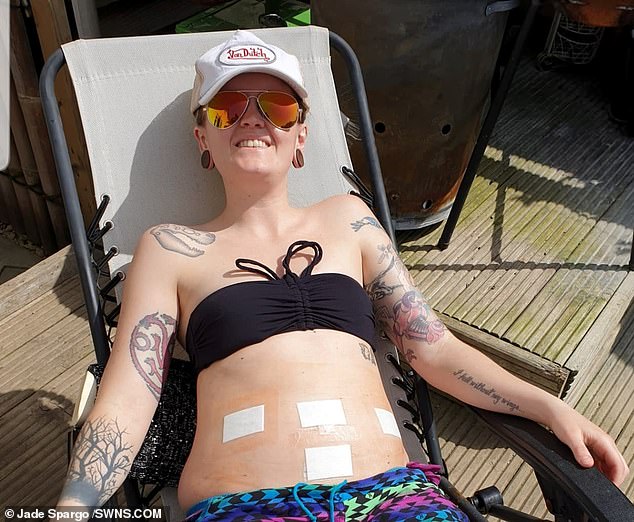 Mrs Spargo with her wife Sabrina and their daughters Willow, two, and Tilda, five months

The former is a condition in which the inner lining of the uterus breaks through the muscle wall of the uterus.

Endometriosis sees womb tissue grow outside the reproductive organ. In Mrs Spargo’s case, she had it on her stomach wall, bladder and bowel.

The debilitating conditions have plagued the maternity support worker throughout her life but became unmanageable in her late twenties.

She was left housebound and constantly phoning in sick to work whenever she had her period and the symptoms ramped up.

Mrs Spargo demanded doctors gave her a hysterectomy – a surgical procedure to remove the womb – to put her out of her misery.

Medics convinced her to hold off having the operation in favour of hormone injections which stop her from having a period.

The injections of the synthetic hormone GnRH switches off the menstrual cycle and puts the body into a temporary menopause.

It does so by reducing the production of the female sex hormone oestrogen – responsible for triggering the release of an egg.

Mrs Spargo said: ‘My periods have been extremely painful ever since I first hit puberty, and I absolutely dread that time of the month. 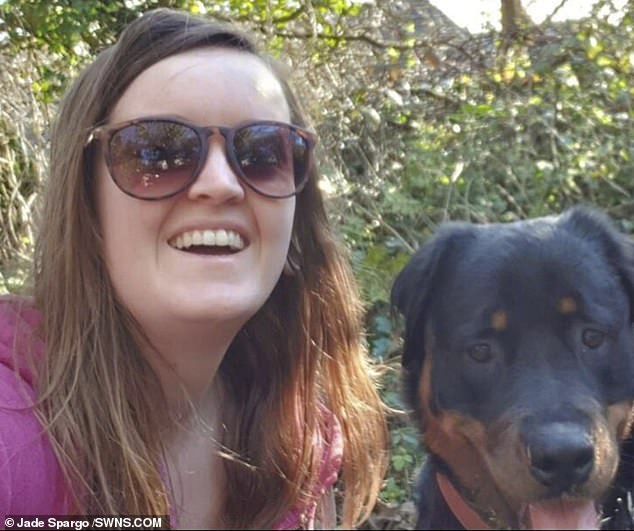 WHAT IS ENDOMETRIOSIS AND HOW IS IT DIAGNOSED?

Endometriosis occurs when cells in the lining of the womb are found elsewhere in the body such as the ovaries and fallopian tubes.

Each month, these cells react in the same way as those in the womb; building up, breaking down and bleeding. Yet, the blood has no way to escape the body.

Symptoms include pain, heavy periods and fatigue, as well as a higher risk of infertility, and bowel and bladder problems.

Around 1.5million women in the UK are suffering from the disease.

Its cause is unknown but may be genetic, related to problems with the immune system or exposure to chemicals.

The only definitive way to diagnose endometriosis is by a laparoscopy – an operation in which a camera – a laparoscope – is inserted into the pelvis via a small cut near the navel.

The surgeon uses the camera to see the pelvic organs and look for any signs of endometriosis.

Treatment focuses on pain relief and improving quality of life, which may include surgery or hormone treatment.

‘I was in so much pain every month and it was honestly ruining my life – I couldn’t move, I was losing so much blood, and I couldn’t even go to work some days

‘It wasn’t until I reached breaking point and begged for a hysterectomy that they actually started listening to me and I’m still angry I had to reach that point to get help.’

Mrs Spargo, who has two daughters – Willow, two, and Tilda, five months – with wife Sabrina, 34, started her course of injections one month ago.

She added: ‘Hearing that I would be going through menopause so early because of my medical conditions was difficult and it did really get me down.

‘But I am desperate for the pain to stop – my most recent period was a week ago and I thought something was seriously wrong, I’ve never had pain like it and I was on morphine for six days.

‘I’ve just given up my contract on the maternity ward and signed onto the bank for less frequent shifts as my illness has been so bad, which has really gutted me.

‘I do still want a hysterectomy, but the doctors want to try me on injections every four months for early menopause first and hold back the hysterectomy for another two years if possible.

‘The early menopause is not fun – I had my first injection a few weeks ago and the hot flushes are horrendous, I’ve got night sweats and crazy moods, I must be a nightmare to live with.’

Mrs Spargo was 16-years-old when she got her first period in 2006 and immediately experienced pain and heavy bleeding.

She started taking the Pill to manage the pain but it didn’t have much effect.

The Pill contain the hormone progesterone, which inhibits the growth of the lining of the womb before menstruation, lessening the bleeding during menstruation.

The teenager battled through each monthly cycle as she fought to not let her menstrual cramps stop her from going to university to study animal science.

She said: ‘I kept a separate bag at school with spare clothes and underwear and god knows how many pads in. It was horrendous.

Mrs Spargo and Sabrina always wanted four children, and agreed to share the pregnancies evenly. But it’s looking ever more likely that Sabrina will have to give birth to all of them

WHAT ARE GNRH INJECTIONS?

A hormone-based treatment aimed at relieving the symptoms that some women may experience if they have conditions affecting the uterus (womb).

Some women the medicine can be used to find out if there is a hormonal reason for their problem, such as premenstrual syndrome (PMS).

It may also be used for patients with endometriosis.

The medicine can be used for women up to the menopause.

GnRH is an implant injection, which will be injected under the skin into your stomach every four weeks by your GP or nurse.

The medicine works by reducing the amount of the female sex organ oestrogen.

This switches off the menstrual cycle and puts the body into a temporary menopause, so your periods will temporarily stop while you are taking it.

It can take up to two months to start working and comes with symptoms similar to the menopause – including  hot flushes.

‘I only missed a few days off school because of it but it made doing my GCSEs and A Levels really difficult.

‘I can remember sitting my GCSE English Language exam and I had started my period the day before.

‘I was so nervous about bleeding through in front of the whole year, I couldn’t concentrate very well on the exam at all.’

Over the next decade, Mrs Spargo’s doctors tried her on a variety of contraceptive pills to make her periods more manageable.

She was pleased when her pain subsided slightly in 2009 and hoped she had grown out of it, but her agony returned with a vengeance in 2013.

By this point, Mrs Spargo had met her partner Sabrina Spargo, 34, and the pair dreamed of having a family together.

She added: ‘Sabrina and I both wanted to have a children and we came up with a plan of how we’d build up our family together.

‘Sabrina has always been very supportive and understanding about my periods, and the impact they have on my mental health.

‘I always believed my mental health struggles were connected to my physical pain, and only recently have doctors acknowledged they could be linked.’

Her pain got increasingly worse from 2013, affecting her everyday life to the point that she couldn’t walk or ride a bike.

Although she enjoyed working, she agony grew increasingly difficult to manage and she was forced to take time off work during the most painful days of her cycle.