I’m one of those quasi-vegans. I’m a huge fan of plant-based meat alternatives, especially Beyond Burgers. I refuse (most) dairy and I won’t shy away from ordering from the vegan menu at restaurants. Other than that, I eat eggs, I eat fish, and I most definitely eat cheese because, let’s face it, a life without cheese is not a life worth living. But, I will say, over the past year or so, a few brands have created plant-based cheeses that actually taste alright, like Field Roast’s vegan Chao slices, that make committing to the vegan diet more appealing. And this year, a new, vegan-friendly quest-style dip has arrived on shelves, and it might just convert us all.

Good Foods’ quest-style dip is sold at Target for $4.99 each. The dip is a mix of veggies, including cauliflower, red bell peppers, garlic, and red onions; spices, including cayenne pepper, ground turmeric, ground cumin, and sea salt; and other good-for-you ingredients, like almonds, water, almond butter, apple cider vinegar, lemon juice, nutritional yeast, and chia protein. HOW these ingredients combine to taste like queso dip is honestly beyond us, but we can’t wait to try it. 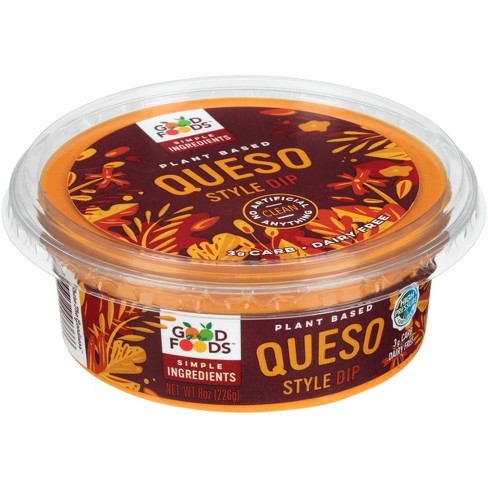 “This stuff is absolutely delicious!” one reviewer wrote on Target’s website. “I love how it [tastes] chilled. I paired it with some tortilla chips!”

Don’t be fooled, though; this isn’t a substitute for the warm, gooey queso dip you’ve likely devoured in minutes at restaurants.

“When I bought this on the whim, in my mind, I was picturing it as a warm queso substitute, but when I went to consume it I realized that I believe it’s meant to be served as a chilled dip. For this reason, I wouldn’t compare it to queso, as there are better plant based alternatives out there in that regard,” another reviewer wrote. “But as an overall dip it tasted fine and the quality seemed good. I’m glad to have this as a healthier dip option in the future.”

The best part about this dip is it’s only 45 calories for 2 tablespoons. Plus, it’s gluten-free and has zero sugar added.

Good Foods also sells a chunky guacamole dip and a buffalo-style dip, which is also plant-based, among other products.

Target isn’t the only store that sells the dip, though. Costco also carries a larger size of it for $7.79.

Now that the word is out, better make a run to either Target or Costco today before they likely sell out.